A Riot of Virtues

“When a religious scheme is shattered it is not merely the vices that are let loose … the virtues are let loose also … and the virtues do more terrible damage. The modern world is full of the old Christian virtues gone mad.” -G.K. Chesterton, Orthodoxy

A notable and perhaps puzzling thing about the political division of our time is that the Left, despite its hostility to religion, always assumes the mantle of virtue. It might even be said without exaggeration that their platform is no longer founded so much on pragmatism as on moralism, with compassion as its composite doctrine and critical weapon.

Compassion is the shibboleth of the Left. All that they espouse, no matter how monstrous and obscene, is led into the public arena under the protective wing of the angel of compassion. To oppose the Left is by definition to lack compassion: to be mean, bigoted, racist, xenophobic, homophobic and every other thing that the media calls evil.  Diatribe has replaced discourse. Anyone who disagrees with the Left is slandered as cruel and all arguments are arguments ad hominem.

Compassion, as it is now generally understood, turns morality on its head: evil becomes good and good, evil. There is a demonic reversal in the meaning of language. This is plainly illustrated by the fact that aberration – especially sexual aberration – must now be portrayed as normal, even commendable and superior. To regard a pink-haired, transvestite homosexual as less than an admirable role model for our children is a crime against compassion that must be denounced in the harshest terms. Some parents who objected to the now nationwide trend of inviting drag queens into public libraries to read to children during story hours were portrayed by the media as intolerant homophobes intent on instilling hatred and fear in their unfortunate offspring.  And no public figure can be found who will say this is madness.

Pope Francis has also raised the flag of compassion in his campaign for Muslim immigration and open borders. In the name of “welcoming the stranger” we are told we must accept into our nations and neighborhoods people who violate our laws, despise our culture and exploit the welfare bureaucracy at our expense. Any attempt to maintain the integrity of our culture and to resist lawlessness and exploitation is characterized as “un-Christian.”

Compassion has become a club to bludgeon all opposition to the Left. It is taken up by politician and Pope, by the media and universities. Careers can now be destroyed by inadvertently speaking any truth that can be construed as lacking in compassion. Compassion has become a lion that roams through the land seeking whom it may devour.

The late Catholic writer Flannery O’Connor once said that in the absence of Faith, we rule by compassion and “compassion leads to the gas chamber.” This may seem a puzzling comment: how can compassion lead to genocide? The same way it can lead to abortion, euthanasia, adultery, divorce, “gay marriage,” and most any vice imaginable. For compassion, in the sense it is now understood, is but the elevation of base desire to an idol before whom we must all burn our pinch of incense if we wish to escape condemnation.

No matter how deplorable, it must be admitted that the perversion of compassion is a brilliant tactical maneuver by the enemy. But how was a virtue rooted in fraternal charity transformed into a weapon to destroy morality?

The demons are not creative. Only love creates. Evil destroys. It is the friend of death, not life. Demons are scavengers. They pick up what is left lying about, unguarded, and use it to their advantage. When we lose interest in spiritual growth, when God is no longer central to our life, the unused virtues are left lying about. No longer woven into the fabric of a moral life lived with earnestness and clarity, the virtues also become paler, weaker, more liable to confusion and misuse.

When religion was no longer defended in the public square as the only sound basis for civic life, the virtues that cohered in it could no longer be used overtly to inform public policy. Having formally turned away from God in deference to secular power, we then sought secular virtue. But there is no such thing. As Our Lord said, “Only God is good.” The state is only good to the extent that it regards its power as a Divine delegation. Without a basis in religion, the state sinks into the shifting sands of public opinion and the manipulators of that opinion.

In their desire to be accepted as part of the body politic, religious leaders were increasingly willing to subordinate moral principles to the secular doctrine of tolerance: no one was to condemn another for their belief or behavior. Freedom, as the right to engage in any action so long as it respected private property, required tolerance. And tolerance morphed into compassion. The new secular virtue had seemingly been formulated: Freedom plus tolerance equals compassion.

If we are to reclaim the virtues that have been perverted and appropriated by the secular culture, we must place them back within the context of the Faith. Compassion is rooted in fraternal charity, which comes from love of God. You simply cannot love other men without loving God, for God is love. To approve of aberrant behavior in the name of compassion is to deny genuine compassion, for to love another is to wish his good, not to be complicit in his spiritual destruction. That is why it is a spiritual work of mercy to admonish the sinner.

To admonish the sinner these days requires extraordinary love and courage, for it is to call down upon one’s head the wrath of hell, which will take the form of being denounced as hateful and lacking in compassion. To call evil by its name is to break with the powerful forces that shape modern political and social life. It is to invite ridicule and hatred. A man with the courage to call evil by its name these days will hardly have an inch of ground left to stand on in this world. Few will even want to know him anymore, even within his own family.

But what is the alternative? Go along to get along? Watch complacently as what remains of decency and sanity are finally overwhelmed by the madness of politically correct “compassion”?

Chesterton once said that a man can fall from any number of angles, but he can only stand upright at one. Will we stand, or will we fall? There is no avoiding the choice. But if we choose to stand upright, we must rely upon the strength of truth, which may be attacked but can never be overcome. The world may hate us, but we are the world’s only hope, for we have the true formula for virtue: Love plus Truth equals Salvation.

The Passing of a Fatima Witness Father Ingo Dollinger, R.I.P. by Christopher A. Ferrara June 21, 2017 As…
byChris Ferrara
No comments

The Pending “Reform” of the Roman Curia: Another Looming Disaster

Fatima Perspectives #1300 As reported by LifeSiteNews, Cardinal Gerhard Müller, the former Prefect of the Congregation for the…
byChris Ferrara

Vatican II and the Liturgical Collapse: Ignoring the Obvious

Fatima Perspectives #1211 One Father Bill Peckman, a diocesan priest from Missouri, recites the grim statistic that there…
byChris Ferrara 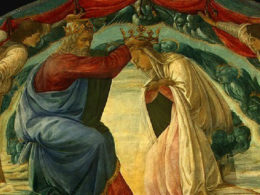 Saturday Fasting in Honor of the Blessed Virgin Mary

Beyond the requirements that the Church mandates for fasting and abstinence, Catholics have always been encouraged to observe…
byMatthew Plese
No comments