A Light in the Darkness

Claire Clement-O’Dowd is one of The Fatima Center’s Irish volunteers.  Yesterday and again this morning, she joined us for our procession of reparation around the grounds of the Royal Dublin Society, where the World Meeting of Families is being held.

Claire and her husband Warren have six children.  Two of them – James and Alex – clad in their altar boy vestments have walked both processions with Father Isaac Mary Relyea, who leads our group.  Claire follows the procession towards the back of our group, pushing a stroller that has room for two infants.

Claire grew up knowing about the Message of Fatima.  Her grandfather spoke about it, and her uncle in England travelled around the country with a slideshow promoting the Message.  That same uncle became aware of Father Gruner and The Fatima Center and encouraged Claire’s mother to put her name on The Fatima Center’s mailing list.  After her mother did so, Claire and her family began to receive our literature.

In March 2015, a little over a month before his death, Father Gruner travelled to Ireland.  Claire travelled to Athlone, a town in central Ireland, to meet Father at a conference he was giving there.  Before meeting Father, Claire and her family had been attending both the New Mass and the Traditional Latin Mass.  After that meeting, Claire resolved to attend only the Traditional Mass.

Still, Claire wanted to do something to bring the Message of Fatima to those who attended the New Mass in the church across the road from where she lived.  She decided she would ask a priest at that church to start having a Mass every first Saturday of the month and to otherwise promote the Five First Saturdays devotion.

But which priest should she ask – the parish pastor or one of his assistants?  Claire prayed in the church to Our Lady for an answer.  She then noticed that someone had left a book in the pew.   She picked it up, and saw that it was a novena to Our Lady of Fatima.  Taking this as a sign, Claire decided to ask whichever priest was in the rectory office that day.

It turned out to be a young priest.  Claire asked and he agreed.  She prepared a sheet to be given out to parishioners who would attend the First Saturday Mass.  It contained information on how to fulfill the devotion, some Fatima prayers and hymns, and other information about Fatima.

At Father Gruner’s conference, Claire had met Joe O’Connell, the point person for The Fatima Center’s efforts in Ireland.  She contacted Joe, who provided her with scapulars and Fatima Center literature, including a book on how to enroll people in the Brown Scapular, which she passed onto the priest.

Over 50 people attended the first First Saturday Mass at the church, and many were enrolled in the Brown Scapular.  As the months passed, more people started to attend and the statue of Our Lady of Fatima was moved to the center of the sanctuary during the Mass.

Claire borrowed a statue of Our Lady of Fatima from her aunt.  The priest agreed to have it on the end of the sanctuary for the first Mass.

Claire reached out to other nearby parishes about the First Saturday devotion.  One already had a First Saturday Mass but took some literature about the devotion.  Another refused to have the devotion, but took some holy cards for their faithful.  Several other people heard about Claire and contacted her to get scapulars for use at their parishes.

Joe O’Connell estimates that since Claire contacted him in 2015, she has caused more than 3,000 Brown Scapulars to be distributed throughout Ireland.  Her efforts have resulted in many hundreds of people being enrolled in the Scapular, completing the Five First Saturdays devotion, attending their first Traditional Latin Mass, or deepening their Faith through the reading of Catholic literature.

Claire cooperated with the graces she received from Our Lord through Our Lady via her grandfather, uncle, mother, Father Gruner and others and, in turn, was the conduit through which many more people received graces from above.  Until the General Judgment, we will not know exactly what the results of her efforts to date have been, but one thing is for sure:  If the graces necessary for the Consecration of Russia to Our Lady’s Immaculate Heart are to be obtained, all of us need to be more like Claire.

Today in the Church, there were new revelations about the filth that permeates the clerical ranks.  Today, at the World Meeting of Families in Dublin, a panel discussion was held on “Exploring Contemporary Interest in Genealogy.”  Evil and banality abounds.

Today, just outside the World Meeting of Families, a mother pushed a stroller, kept an eye on her children, and offered 15 decades of the Rosary to another Mother in reparation for evil and banality.  Grace abounds more.

After offering the first of five Masses of reparation in respect of the World Meeting of Families and preaching a powerful sermon on the Feast of the Immaculate Heart, Father Relyea led a slightly larger group of us on our second procession of reparation around the grounds in which the conference is being held.  All 15 decades of the Rosary were prayed and our group attracted the attention of multiple priests and several bishops.

In the afternoon, we got a look at some of the spaces that have been prepared for the World Meeting of Families (photos to come), while some members of our group attended talks by John-Henry Westen from LifeSiteNews and others at an alternative conference sponsored by a conservative Catholic group called Lumen Fidei that is being held down the road from the World Meeting of Families (full report to come). 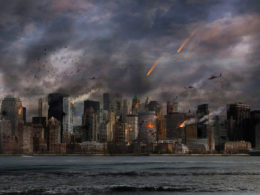 Fatima Not Yet Fulfilled and Still Foreboding (Part V) 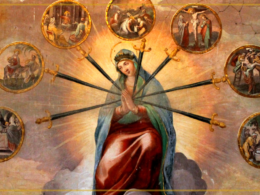 The Seven Sorrows of the Blessed Virgin Mary

A Brief Reflection Today is the Feast of the Seven Sorrows of the Blessed Virgin Mary.  On this…
byFather Michael E. Rodriguez
1 share
1
0
0
0
No comments

The Errors of the Old Catholics

Catholic Apologetics #18 To those Catholics who wish to hold fast to the venerable traditions of our Fathers,…
byMatthew Plese
1 share
1
0
0
0

YouTube has banned The Fatima Center from posting videos for a week (September 22-28, 2022) due to a "violation" in promoting the truth in our video, Conscientious Objection and Blessed Franz Jagersttaer. If you'd like to get our latest videos and watch some of our previous videos, like the one that got banned on YouTube, check out The Fatima Center's Rumble channel. We appreciate your ongoing support and prayers as we continuously strive to bring Our Lady of Fatima's Message to the world!
Total
12
Share
12
0
0
0