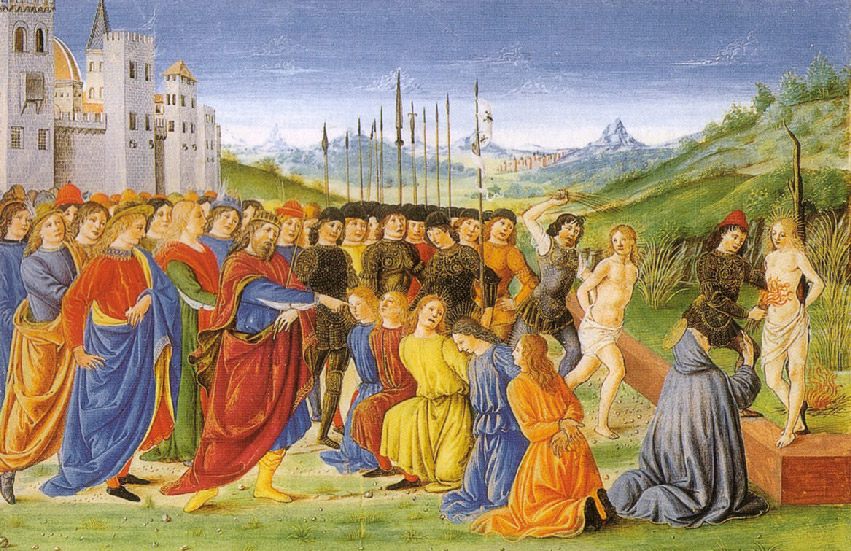 The Seven Brothers, and St. Felicitas their Mother – Martyrs

THE illustrious martyrdom of these Saints happened at Rome, under the Emperor Antoninus. The seven brothers were the sons of St. Felicitas, a noble, pious, Christian widow in Rome, who, after the death of her husband, served God in a state of continency and employed herself wholly in prayer, fasting, and works of charity. By the public and edifying example of this lady and her whole family many idolaters were moved to renounce the worship of their false gods, and to embrace the Faith of Christ. This excited the anger of the heathen priests, who complained to the emperor that the boldness with which Felicitas publicly practised the Christian religion drew many from the worship of the immortal gods, who were the guardians and protectors of the empire, and that, in order to appease these false gods, it was necessary to compel this lady and her children to sacrifice to them. Publius, the prefect of Rome, caused the mother and her sons to be apprehended and brought before him, and, addressing her, said, “Take pity on your children, Felicitas; they are in the bloom of youth, and may aspire to the greatest honors and preferments.” The holy mother answered, “Your pity is really impiety, and the compassion to which you exhort me would make me the most cruel of mothers.” Then turning herself towards her children, she said to them, “My sons, look up to heaven, where Jesus Christ with His Saints expects you. Be faithful in His love, and fight courageously for your souls.” Publius, being exasperated at this behavior, commanded her to be cruelly buffeted; he then called the children to him one after another, and used many artful speeches, mingling promises with threats to induce them to adore the gods. His arguments and threats were equally in vain, and the brothers were condemned to be scourged. After being whipped, they were remanded to prison, and the prefect, despairing to overcome their resolution, laid the whole process before the emperor. Antoninus gave an order that they should be sent to different judges, and be condemned to different deaths. Januarius was scourged to death with whips loaded with plummets of lead. The two next, Felix and Philip, were beaten with clubs till they expired. Sylvanus, the fourth, was thrown headlong down a steep precipice. The three youngest, Alexander, Vitalis, and Martialis, were beheaded, and the same sentence was executed upon the mother four months after.

Reflection. —What afflictions do parents daily meet with from the disorders into which their children fall through their own bad example
203 Lives Of The Saints By Alban Butler, Benziger Bros. Edition www.globalgrey.co.uk
or neglect! Let them imitate the earnestness of St. Felicitas in forming to perfect virtue the tender souls which God hath committed to their charge, and with this Saint they will have the greatest of all comforts in them, and will by His grace count as many Saints in their family as they are blessed with children.