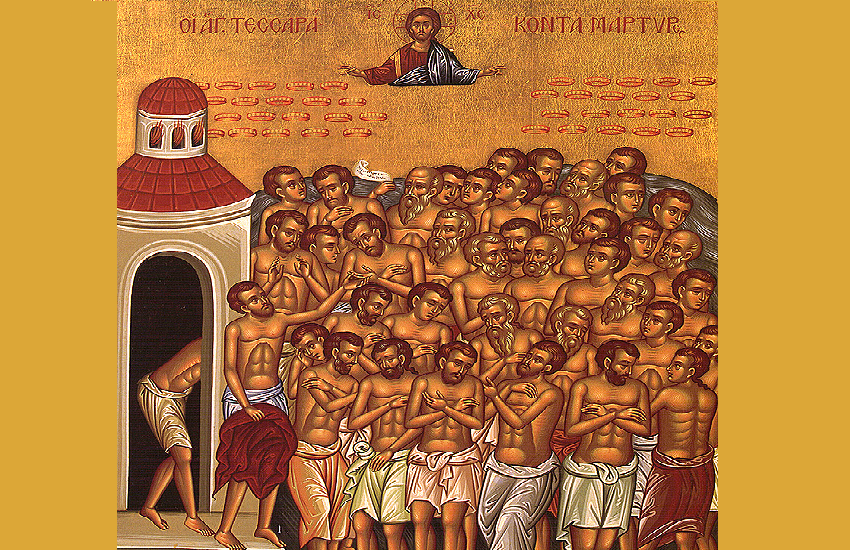 The Forty Martyrs of Sebaste

THE FORTY MARTYRS were soldiers quartered at Sebaste in Armenia, about the year 320. When their legion was ordered to offer sacrifice they separated themselves from the rest and formed a company of martyrs. After they had been torn by scourges and iron hooks they were chained together and led to a lingering death. It was a cruel winter, and they were condemned to lie naked on the icy surface of a pond in the open air till they were frozen to death. But they ran undismayed to the place of their combat, joyfully stripped off their garments, and with one voice besought God to keep their Tanks unbroken. “Forty,” they cried, “we have come to combat: grant that forty may be crowned.” There were warm baths hard by, ready for any one amongst them who would deny Christ. The soldiers who watched saw angels descending with thirty-nine crowns, and, while he wondered at the deficiency in the number, one of the confessors lost heart, renounced his faith, and, crawling to the fire, died body and soul at the spot where he expected relief. But the soldier was inspired to confess Christ and take his place, and again the number of forty was complete. They remained steadfast while their limbs grew stiff and frozen, and died one by one. Among the Forty there was a young soldier who held nut longest against the cold, and when the officers came to cart away the dead bodies they found him still breathing. They were moved with pity, and wanted to leave him alive in the hope that he would still change his mind. But his mother stood by, and ‘this valiant woman could not bear to see her son separated from the band of martyrs. She exhorted him to persevere, and lifted his frozen body into the cart. He was just able to make a sign of recognition, and was borne away, to be thrown into the flames with the dead bodies of his brethren.
78 Lives Of The Saints By Alban Butler, Benziger Bros. Edition www.globalgrey.co.uk

Reflection. —All who live the life of grace are one in Christ. But besides this there are many specialties—of religion, of community life, or at least of aspirations in prayer, and pious works. Thank God if He has bound you to others by these spiritual ties; remember the character you have to support, and pray that the bond which unites you here may last for eternity.