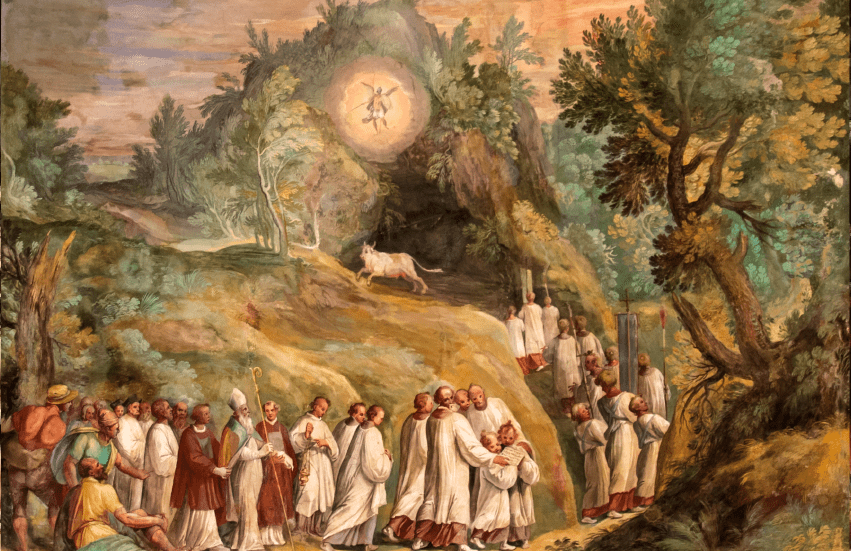 The Apparition of St. Michael the Archangel

IT is manifest, from the Holy Scriptures, that God is pleased to make frequent use of the ministry of the heavenly spirits in the dispensations of His providence in this world, and especially towards man. Hence the name of Angel (which is not properly a denomination of nature, but office) has been appropriated to them. The angels are all pure spirits; they are, by a property of their nature, immortal, as every spirit is. They have the power of moving or conveying themselves from place to place, and such is their activity that it is not easy for us to conceive it. Among the holy archangels, there are particularly distinguished in Holy Writ Sts. Michael, Gabriel, and Raphael. St. Michael, whom the Church honors this day, was the prince of the faithful angels who opposed Lucifer and his associates in their revolt against Gad. As the devil is the sworn enemy of God’s holy Church, St. Michael is its special protector against his assaults and stratagems. This holy archangel has ever been honored in the Christian Church as her guardian under God, and as the protector of the faithful; for God is pleased to employ the zeal and charity of the good angels and their leader against the malice of the devil. To thank His adorable goodness for this benefit of His merciful providence is this festival instituted by the Church in honor of the good angels, in which devotion she has been encouraged by several apparitions of this glorious archangel. Among others, it is recorded that St. Michael, in a vision, admonished the Bishop of Siponto to build a church in his honor on Mount Gargano, near Manfredonia, in the kingdom of Naples. When the Emperor Otho III. had, contrary to his word, put to death, for rebellion, Crescentius, a Roman senator, being touched with remorse he cast himself at the feet of St. Romuald, who, in satisfaction for his crime, enjoined him to walk barefoot, on a penitential pilgrimage, to St. Michael’s on Mount Gargano, which penance he performed in 1002. It is mentioned in particular of this special guardian and protector of the Church that, in the persecution of Antichrist, he will powerfully stand up in her defence: “At that time shall Michael rise up, the great prince, who standeth for the children of thy people.”

Reflection. —St. Michael is not only the protector of the Church, but of every faithful soul. He defeated the devil by humility: we are enlisted in the same warfare. His arms were humility and ardent love of God: the same must be our weapons. We ought to regard this archangel as our leader under God: and, courageously resisting the devil in all his assaults, to cry out, Who can be compared to God?