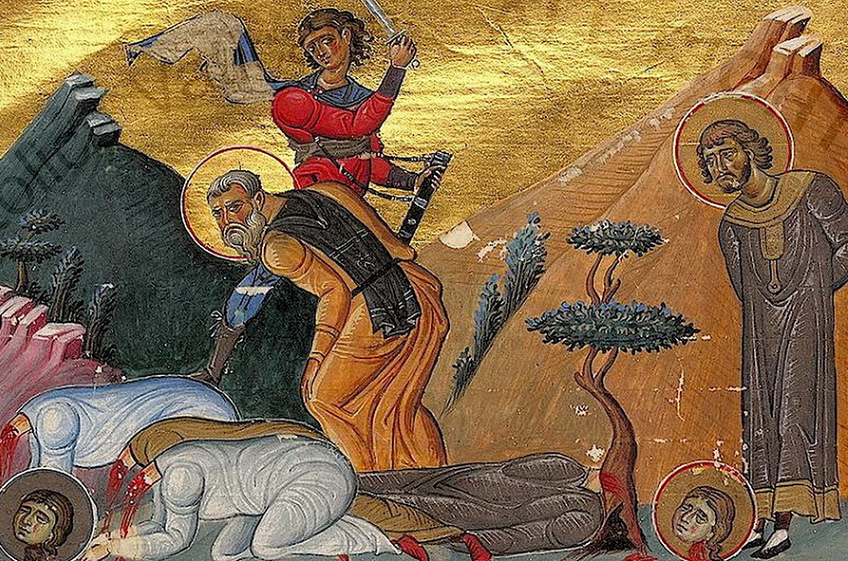 IN the seventh year of Diocletian’s persecution, continued by Galerius Maximianus, when Firmilian, the most bloody governor of Palestine, had stained Cæsarea with the blood of many illustrious martyrs, Adrian and Eubulus came out of the country called Magantia to Cæsarea, in order to visit the holy confessors there. At the gates of the city they were asked, as others were, whither they were going, and upon what errand. They ingenuously confessed the truth, and were brought before the president, who ordered them to be tortured and their sides to be torn with iron hooks, and then condemned them to be exposed to wild beasts. Two days after, when the pagans at Cæsarea celebrated the festival of the public Genius, Adrian was exposed to a lion, and not being despatched by that beast, but only mangled, was at length killed by the sword. Eubulus was treated in the same manner two days later. The judge offered him his liberty if he would sacrifice to idols; but the Saint preferred a glorious death, and was the last that suffered in this persecution at Cæsarea, which had now continued twelve years, under three successive governors, Flavian, Urban, and Firmilian. Divine vengeance pursuing the cruel Firmilian, he was that same year beheaded for his crimes, by the emperor’s order, as his predecessor Urban had been two years before.

Reflection. —It is in vain that we take the name of Christians, or pretend to follow Christ, unless we carry our crosses after Him. It is in vain that we hope to share in His glory, and in His kingdom, if we accept not the condition. We cannot arrive at heaven by any other road but that which Christ held, Who bequeathed His cross to all His elect as their portion and inheritance in this world.