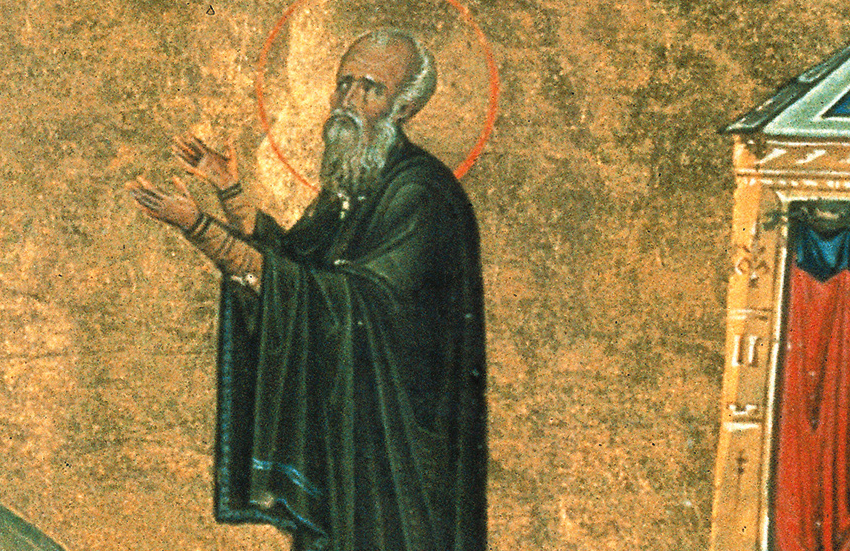 ABRAHAM was a rich nobleman of Edessa. At his parents’ desire he married, but escaped to a cell near the city as soon as the feast was over. He walled up the cell-door, leaving only a small window through which he received his food. There for fifty years he sang God’s praises and implored mercy for himself and for all men. The wealth which fell to him on his parents’ death he gave to the poor. As many sought him for advice and consolation, the Bishop of Edessa, in spite of his humility, ordained him priest. St. Abraham was sent, soon after his ordination, to an idolatrous city which had hitherto been deaf to every messenger. He was insulted, beaten, and three times banished, but he returned each time with fresh zeal. For three years he pleaded with God for those souls, and in the end prevailed. Every citizen came to him for Baptism. After providing for their spiritual needs he went back to his cell more than ever convinced of the power of prayer. His brother died, leaving an only daughter, Mary, to the Saint’s care. He placed her in a cell near his own, and devoted himself to training her in perfection. After twenty years of innocence she fell, and fled in despair to a distant city, where she drowned the voice of conscience in sin. The Saint and his friend St. Ephrem prayed earnestly for her during two years. Then he went disguised to seek the lost sheep, and had the joy of bringing her back to the desert a true penitent. She received the gift of miracles, and her countenance after death shone as the sun. St. Abraham died five years before her, about 360. All Edessa came for his last blessing and to secure his relics.

Reflection. —Oh, that we realized the omnipotence of prayer! Every soul was created to glorify God eternally; and it is in the power of every one to add by the salvation of his neighbor to the glory of God. Let us make good use of this talent of prayer, lest our brother’s blood be required of us at the last.