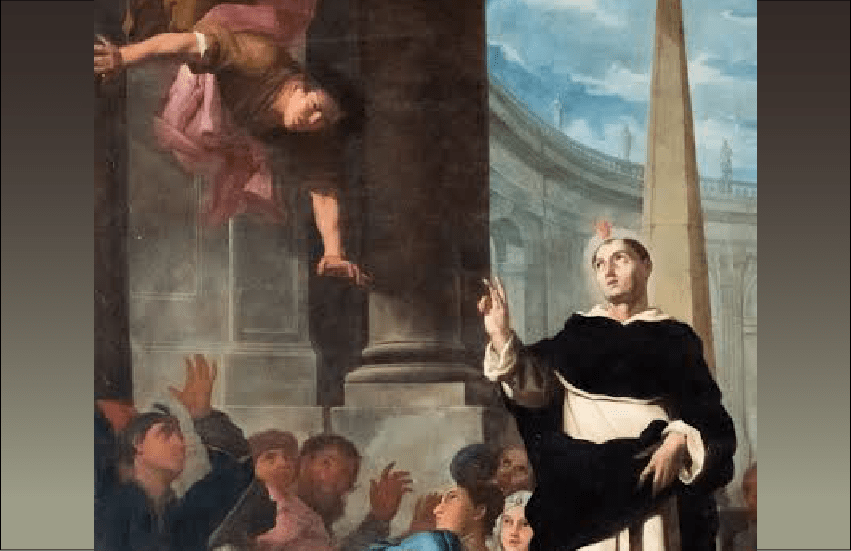 CH’s wonderful apostle, the “Angel of the Judgment,” was born at Valencia in Spain, in 1350, and at the age of eighteen professed in the Order of St. Dominic. After a brilliant course of study he became master of sacred theology. For three years he read only the Scriptures, and knew the whole Bible by heart. He converted the Jews of Valencia, and their synagogue became a church. Grief at the great schism then afflicting the Church reduced him to the point of death; but Our Lord Himself in glory bade him go forth to convert sinners, “for My judgment is nigh.” This miraculous apostolate lasted twenty-one years. He preached throughout Europe, in the towns and villages of Spain, Switzerland, France, Italy, England, Ireland, Scotland. Everywhere tens of thousands of sinners were reformed; Jews, infidels, and heretics were converted. Stupendous miracles enforced his words. Twice each day the ” miracle bell ” summoned the sick, the blind, the lame to be cured. Sinners the most obdurate became Saints; speaking only his native Spanish, he was understood in all tongues. Processions of ten thousand penitents followed him in perfect order. Convents, orphanages, hospitals, arose in his path. Amidst all, his humility remained profound, his prayer constant. He always prepared for preaching by prayer. Once, however, when a person of high rank was to be present at his sermon he neglected prayer for study. The nobleman was not particularly struck by the discourse which had been thus carefully worked up; but coming again to hear the Saint, unknown to the latter, the second sermon made a deep impression on his soul. When St. Vincent heard of the difference, he remarked that in the first sermon it was Vincent who had preached, but in the second, Jesus Christ. He fell ill at Vannes in Brittany, and received the crown of everlasting glory in 1419.

Reflection. —”Whatever you do,” said St. Vincent, “think not of yourself, but of God.” In this spirit he preached, and God spoke by him; in this spirit, if we listen, we shall hear the voice of God.