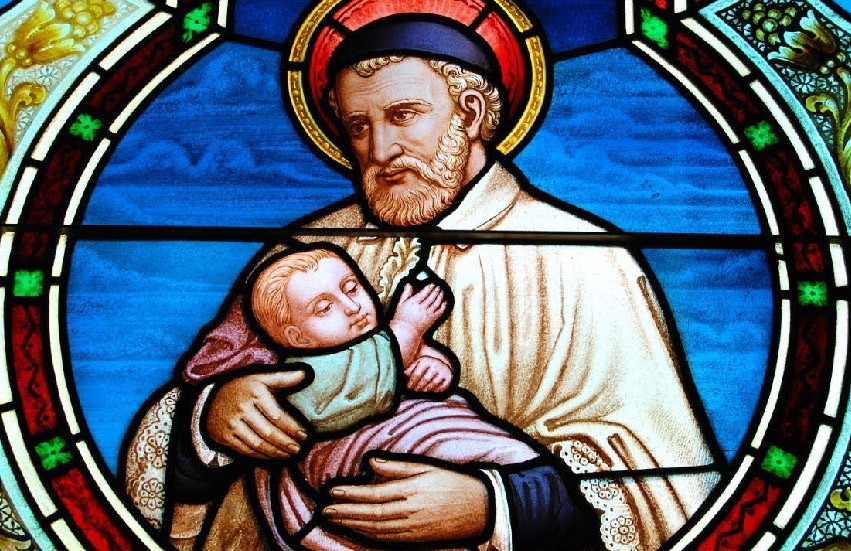 ST. VINCENT was born in 1576. In after-years, when adviser of the queen and oracle of the Church in France, he loved to recount how, in his youth, he had guarded his father’s pigs. Soon after his ordination he was captured by corsairs, and carried into Barbary. He converted his renegade master, and escaped with him to France. Appointed chaplain-general of the galleys of France, his tender charity brought hope into those prisons where hitherto despair had reigned. A mother mourned her imprisoned son. Vincent put on his chains and took his place at the oar, and gave him to his mother. His charity embraced the poor, young and old, provinces desolated by civil war, Christians enslaved by the infidel. The poor man, ignorant and degraded, was to him the image of Him Who became as “a leper and no man.” “Turn the medal,” he said, “and you then will see Jesus Christ.” He went through the streets of Paris at night, seeking the children who were left there to die. Once robbers rushed upon him, thinking he carried a treasure, but when he opened his cloak, they recognized him and his burden, and fell at his feet. Not only was St. Vincent the saviour of the poor, but also of the rich, for he taught them to do works of mercy. When the work for the foundlings was in danger of failing from want of funds, he assembled the ladies of the Association of Charity. He bade his most fervent daughters be present to give the spur to the others. Then he said, “Compassion and charity have made you adopt these little creatures as your children. You have been their mothers according to grace, when their own mothers abandoned them. Cease to be their mothers, that you may become their judges; their life and death are in your hands. I shall now take your votes: it is time to pronounce sentence” The tears of the assembly were his only answer, and the work was continued. The Society of St. Vincent, the Priests of the Mission, and 25,000 Sisters of Charity still comfort the afflicted with the charity of St. Vincent of Paul. He died in 1660.

Reflection. —Most people who profess piety ask advice of directors about their prayers and spiritual exercises. Few inquire whether they are not in danger of damnation from neglect of works of charity.