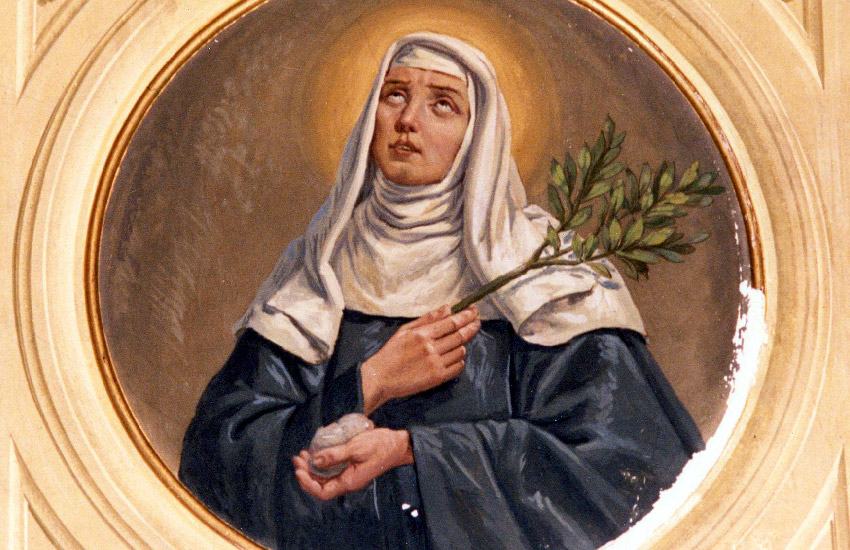 VERONICA’S parents were peasants of a village near Milan. From her childhood she toiled hard in the house and the field, and accomplished cheerfully every menial task. Gradually the desire for perfection grew within her; she became deaf to the jokes and songs of her companions, and sometimes, when reaping and hoeing, would hide her face and weep. Knowing no letters, she began to be anxious about her learning, and rose secretly at night to teach herself to read. Our Lady told her that other things were necessary, but not this. She showed Veronica three mystical letters which would teach her more than books. The first signified purity of intention; the second, abhorrence of murmuring or criticism; the third, daily meditation on the Passion. By the first she learned to begin her daily duties for no human motive, but for God alone; by the second, to carry out what she had thus begun by attending to her own affairs, never judging her neighbor, but praying for those who manifestly erred; by the third she was enabled to forget her own pains and sorrows in those of her Lord, and to weep hourly, but silently, over the memory of His wrongs. She had constant ecstasies, and saw in successive visions the whole life of Jesus, and many other mysteries. Yet, by a special grace, neither her raptures nor her tears ever interrupted her labors, which ended only with death. After three years’ patient waiting she was received as a lay-sister in the convent of St. Martha at Milan. The community was extremely poor, and Veronica’s duty was to beg through the city for their daily food. Three years after receiving the habit she was afflicted with secret but constant bodily pains, yet never would consent to be relieved of any of her labors, or to omit one of her prayers. By exact obedience she became a living copy of the rule, and obeyed with a smile the least hint of her Superior. She sought to the last the most hard and humbling occupations, and in their performance enjoyed some of the highest favors ever granted to a Saint. She died in 1497, on the day she had foretold, after a six months’ illness, aged fifty-two years, and in the thirtieth of her religious profession.

Reflection. —When Veronica was urged in sickness to accept some exemption from her labors, her one answer was, “I must work while I can, while I have time.” Dare we, then, waste ours?

ALL states furnish abundant means for attaining to sanctity and Christian perfection, and it is only, owing to our sloth and tepidity that we neglect to make use of them. This saint could boast of no worldly advantages either by birth or fortune. Her parents maintained their family by hard labor in a village near Milan, and were both very pious; her father never sold a horse, or anything else he dealt in, without being more careful to acquaint the purchaser with all that was secretly faulty in it, than to recommend its good qualities. His narrow circumstances prevented his giving his daughter any schooling, so that she never learned to read; but his own, and his devout wife’s example, and fervent though simple instructions, filled her tender heart from the cradle with lively sentiments of virtue. The pious {136} maid from her infancy applied herself to continual prayer, was very attentive to the instructions given in the catechism; and the uninterrupted consideration of the holy mysteries, and the important truths of religion, engrossed her whole soul to themselves. She was, notwithstanding, of all others, the most diligent and indefatigable in labor; and so obedient to her parents and masters, even in the smallest trifles, so humble and submissive to her equals, that she seemed to have no will of her own. Her food was coarse and very sparing, and her drink the same which the poorer sort of people used in that country, water, except sometimes whey, or a little milk. At her work she continually conversed in her heart with God; insomuch that in company she seemed deaf to their discourses, mirth, and music. When she was weeding, reaping, or at any other labor in the fields, she strove to work at a distance from her companions, to entertain herself the more freely with her heavenly spouse. The rest admired her love of solitude, and on coming to her, always found her countenance cheerful, yet often bathed in tears, which they sometimes perceived to flow in great abundance; though they did not know the source to be devotion: so carefully did Veronica conceal what passed in her soul between her and God.

Through a divine call to a religious and conventual state of life, she conceived a great desire to become a nun, in the poor, austere, and edifying convent of St. Martha, of the order of St. Austin in Milan. To qualify herself for this state, being busied the whole day at work, she sat up at night to learn to read and write, which the want of an instructor made a great fatigue to her. One day being in great anxiety about her learning, the Mother of God, to whom she had always recommended herself, in a comfortable vision bade her banish that anxiety; for it was enough if she knew three letters: The first, purity of the affections, by placing her whole heart on God alone, loving no creature, but in him and for him; the second, never to murmur, or be impatient at the sins, or any behavior of others, but to bear them with interior peace and patience, and humbly to pray for them; the third, to set apart some time every day to meditate on the passion of Christ. After three years’ preparation, she was admitted to the religious habit in St. Martha’s. Her life was entirely uniform, perfect, and fervent in every action, no other than a living copy of her rule, which consisted in the practice of evangelical perfection reduced to certain holy exercises. Every moment of her life she studied to accomplish it to the least tittle, and was no less exact in obeying the order or direction of any superior’s will. When she could not obtain leave to watch in the church so long as she desired, by readily complying, she deserved to hear from Christ, that obedience was a sacrifice the most dear to him, who, to obey his Father’s will, came down from heaven, becoming obedient even unto death. She lay three years under a lingering illness, all which time she would never be exempted from any duty of the house, or part of her work, or make use of the least indulgence, though she had leave; her answer always was, “I must work while I can, while I have time.” It was her delight to help and serve every one. She always sought with admirable humility the last place, and the greatest drudgery. It was her desire to live always on bread and water. Her silence was a sign of her recollection and continual prayer, in which her gift of abundant and almost continual tears was most wonderful. She nourished them by constant meditation on her own miseries, on the love of God, the joys of heaven, and the sacred passion of Christ. She always spoke of her own sinful life, as she called it, though it was most innocent, with the most feeling sentiments of compunction. She was favored by God with many extraordinary visits and comforts. By moving exhortations to virtue, she softened and converted several obdurate sinners. She died at the hour which she had foretold, in the year 1497, and the fifty-second of her age. Her sanctity was confirmed by miracles. Pope Leo X., by a bull in 1517, permitted her to be honored in her monastery in the same manner as if she had been beatified according to the usual form. The bull may be seen in Bollandus. Her name is inserted on this day in the Roman Martyrology, published by Benedict XIV., in the year 1749; but on the 28th of this month, in that of the Austin friars, approved by the same pope.

Christian perfection consists very much in the performance of our ordinary actions, and the particular duties of our respective stations. God, as the good father and great master of the family of the world, allots to every one his proper place and office in it; and it is in this variety of states by which it subsists; and in their mutual dependence upon each other, that its good order and beauty consist. It is the most holy and wise appointment of providence and the order of nature, that the different stations in the world be filled. Kings and subjects, rich and poor, reciprocally depend upon each other; and it is the command of God that every one perform well the part which is assigned him. It is, then, by the constant attendance on all the duties of his state, that a person is to be sanctified. By this all his ordinary actions will be agreeable sacrifices to God, and his whole life a continued chain of good works. It is not only in great actions, or by fits and starts, but in all that we do, and in every moment, that we are bound to live to God. The regulation of this point is of essential importance in a virtuous life, that every action may be performed with regularity, exactitude in all its circumstances, and the utmost fervor, and by the most pure motive, referred solely to divine honor, in union with the most holy actions and infinite merits of Christ. Hence St. Hilary says, “When the just man performs all his actions, with a pure and simple view to the divine honor and glory, as the apostle admonishes us, his whole life becomes an uninterrupted prayer; and as he passes his days and nights in the accomplishment of the divine will, it is true to say, that the whole course of a holy life is a constant meditation on the law of God.” Nevertheless this axiom, that the best devotion is the constant practice of a person’s ordinary duties, is abused by some, to excuse a life of dissipation. Everyone is bound to live to himself in the first place, and to reserve leisure for frequent exercises of devotion; and it is only by a spirit of perfect self-denial, humility, compunction, and prayer, and by an assiduous attention of the soul to God, that our exterior ordinary actions will be animated by the motives of divine faith and charity, and the spirit of true piety nourished in our breasts; in this consists the secret of a Christian life in all states.

Connection for our times: In a world full of sin and unlawful authority, let us take Saint Veronica’s example and practice the virtue of true obedience, to God over man.