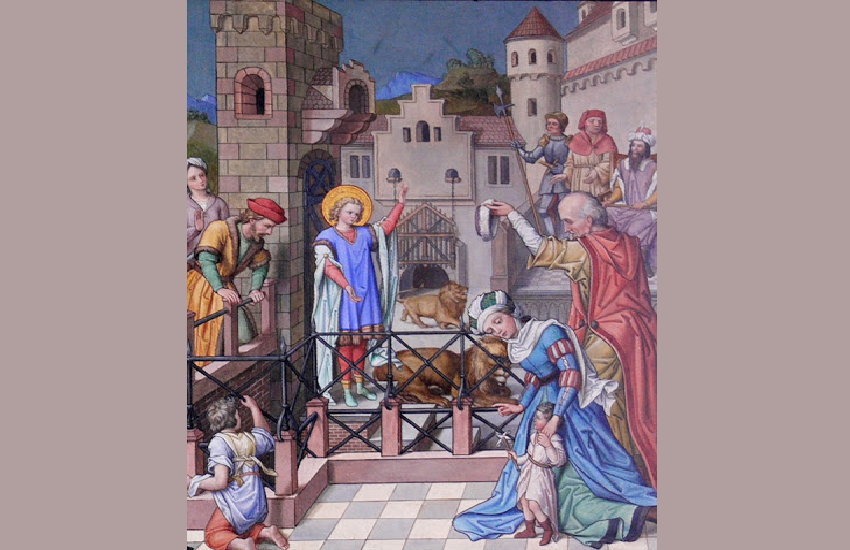 ST. VENANTIUS was born at Camerino in Italy, and at the age of fifteen was seized as a Christian and carried before a judge. As it was found impossible to shake his constancy either by threats or promises, he was condemned to be scourged, but was miraculously saved by an angel. He was then burnt with torches and hung over a low fire that he might be suffocated by the smoke. The judge’s secretary, admiring the steadfastness of the Saint, and seeing an angel robed in white, who trampled out the fire and again set free the youthful martyr, proclaimed his faith in Christ, was baptized with his whole family, and shortly after won the martyr’s crown himself. Venantius was then carried before the governor, who, unable to make him renounce his faith, cast him into prison with an apostate, who vainly strove to tempt him. The governor then ordered his teeth and jaws to be broken, and had him thrown into a furnace, from which the angel once more delivered him. The Saint was again led before the judge, who at sight of him fell headlong from his seat and expired, crying, “The God of Venantius is the true God; let us destroy our idols.” This circumstance being told to the governor, he ordered Venantius to be thrown to the lions; but these brutes, forgetting their natural ferocity, crouched at the feet of the Saint. Then, by order of the tyrant, the young martyr was dragged through a heap of brambles and thorns, but again God manifested the glory of His servant; the soldiers suffering from thirst, the Saint knelt on a rock and signed it with a cross, when immediately a jet of clear, cool water spurted up from the spot. This miracle converted many of those who beheld it, whereupon the governor had Venantius and his converts beheaded together in the year 250. The bodies of these martyrs are kept in the church at Camerino which bears the Saint’s name.

Reflection. —Love of suffering marks the most perfect degree in the love of God. Our Lord Himself was consumed with the desire to suffer, because He burnt with the love of God. We must begin with patience and detachment. At last we shall learn to love the sufferings which conform us to the Passion of our Redeemer.