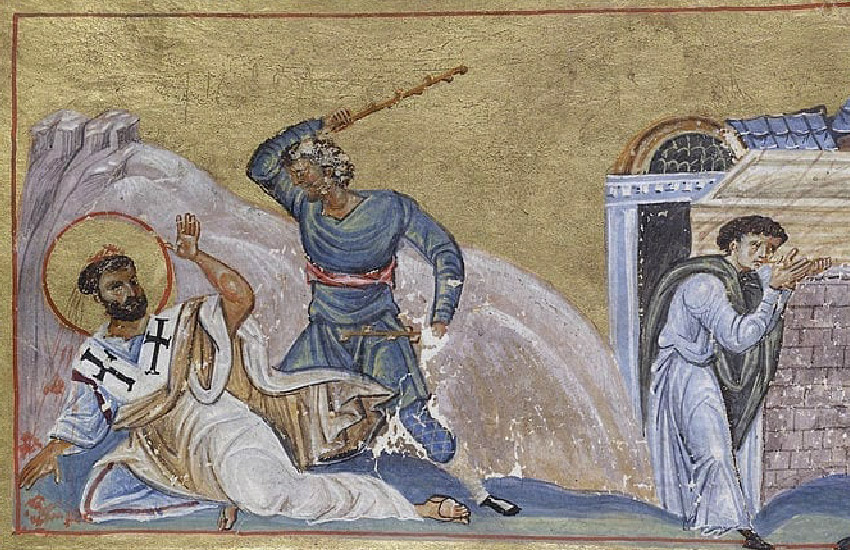 TIMOTHY was a convert of St. Paul. He was born at Lystra in Asia Minor. His mother was a Jewess, but his father was a pagan; and though Timothy had read the Scriptures from his childhood, he had not been circumcised as a Jew. On the arrival of St. Paul at Lystra the youthful Timothy, with his mother and grandmother, eagerly embraced the faith. Seven years later, when the Apostle again visited the country, the boy had grown into manhood, while his good heart, his austerities and zeal had won the esteem of all around him; and holy men were prophesying great things of the fervent youth. St. Paul at once saw his fitness for the work of an evangelist. Timothy was forthwith ordained, and from that time became the constant and much-beloved fellow-worker of the Apostle. In company with St. Paul he visited the cities of Asia Minor and Greece—at one time hastening on in front as a trusted messenger, at another lingering behind to confirm in the faith some recently founded church. Finally, he was made the first Bishop of Ephesus; and here he received the two epistles which bear his name, the first written from Macedonia and the second from Rome, in which St. Paul from his prison gives vent to his longing desire to see his “dearly beloved son,” if possible, once more before his death. St. Timothy himself not many years after the death of St. Paul, won his martyr’s crown at Ephesus. As a child Timothy delighted in reading the sacred books, and to his last hour he would remember the parting words of his spiritual father, “Attende lectioni—Apply thyself to reading.”

Reflection. —St. Paul, in writing to Timothy, a faithful and well-tried servant of God, and a bishop now getting on in years, addresses him as a child, and seems most anxious about his perseverance in faith and piety. The letters abound in minute personal instructions for this end. It is therefore remarkable what great stress the Apostle lays on the avoiding of idle talk, and on the application to holy reading. These are his chief topics. Over and over again he exhorts his son Timothy to “avoid tattlers and busybodies; to give no heed to novelties; to shun profane and vain babblings, but to hold the form of sound words; to be an example in word and conversation; to attend to reading, to exhortation, and to doctrine.”

St. Timothy, the beloved disciple of St. Paul, was of Lycaonia, and probably of the city Lystra. His father was a Gentile, but his mother Eunice a Jewess. She, with Lois his grandmother, embraced the Christian religion, and St. Paul commends their faith. Timothy had made the holy scriptures his study from his infancy. When St. Paul preached in Lycaonia, in the year 51, the brethren of Iconium and Lystra gave him so advantageous a character of the young man, that the apostle, being deprived of St. Barnaby, took him for the companion of his labors, but first circumcised him at Lystra. For though the Jewish ceremonies ceased to be obligatory from the death of Christ, it was still lawful to use them (but not as of precept and obligation) till about the time of the destruction of Jerusalem with the temple, that the synagogue might be buried with honor. Therefore St. Paul refused to circumcise Titus, born of Gentile parents, to assert the liberty of the gospel, and to condemn those who erroneously affirmed circumcision to be still of precept in the New Law. On the other side, he circumcised Timothy, born of a Jewess, by that condescension to render him the more acceptable to the Jews, and to make it appear that himself was no enemy to their law. St. Chrysostom here admires the prudence, steadiness, and charity of St. Paul; and we may add, the voluntary obedience of the disciple. St. Austin extols his zeal and disinterestedness in immediately forsaking his country, his house, and his parents, to follow this apostle, to share in his poverty and sufferings. After he was circumcised, St. Paul, by the imposition of hands, committed to him the ministry of preaching, his rare virtue making ample amends for his want of age. From that time the apostle regarded him not only as his disciple and most dear son, but as his brother, and the companion of his labors. He calls him a man of God, and tells the Philippians, that he found no one so truly united to him in heart and sentiments, as Timothy. This esteem of the apostle is a sufficient testimony of the extraordinary merit of the disciple, whose vocation and entrance into the ministry was accompanied with prophecies in his behalf. St. Paul travelled from Lystra over the rest of Asia, sailed into Macedon, and preached at Philippi, Thessalonica, and Ber[oe]a, in the year 52. Being compelled to quit this last city by the fury of the Jews, he left Timothy behind him, to confirm the new converts there. On St. Paul’s arrival at Athens he sent for him, but being informed that the Christians of Thessalonica lay under a very heavy persecution for the faith, he soon after deputed him to go thither, to comfort and encourage them under it; and he returned to St. Paul, then at Corinth, to give him an account of his success in that commission. Upon this the apostle wrote his first epistle to the Thessalonians. From Corinth St. Paul went to Jerusalem, and then to Ephesus, where he spent two years. Here he formed a resolution of returning into Greece, and sent Timothy and Erastus before him through Macedon, to apprise the faithful in those parts of his intention, and to prepare the alms intended to be sent to the Christians of Jerusalem.

Timothy had a particular order to go afterwards to Corinth, to correct certain abuses, and to revive in the minds of the faithful there the doctrine which the apostle had taught them; who, writing soon after to the Corinthians, earnestly recommended this disciple to them. St. Paul waited in Asia for his return, and then went with him into Macedon and Achaia. St. Timothy left him at Philippi, but rejoined him at Troas. The apostle on his return to Palestine was imprisoned, and after two years custody at Cæsarea, was sent to Rome. Timothy seems to have been with him all or most of this time, and is named by him in the titles of his epistles to Philemon, and to the Philippians and Thessalonians, in the years 61 and 62. St. Timothy himself suffered imprisonment for Christ, and gloriously confessed his name, in the presence of many witnesses; but was set at liberty. He was ordained bishop by a prophecy, and a particular order of the Holy Ghost. He received by this imposition of hands, not only the grace of the sacrament, and the authority to govern the church, but also the power of miracles, and the other exterior gifts of the Holy Ghost. St. Paul being returned from Rome into the East, in the year 64, left St. Timothy at Ephesus, to govern that church, to oppose false teachers, and to ordain priests, deacons, and even bishops. For St. Chrysostom and other fathers observe, that he committed to him the care of all the churches of Asia: and St. Timothy is always named the first bishop of Ephesus. St. Paul wrote his first epistle to Timothy from Macedon, in 64; and his second, in 65, from Rome, while there in chains, to press him to come to Rome, that he might see him again before he died. It is an effusion of his heart, full of tenderness towards this his dearest son. In it he encourages him, endeavors to renew and stir up in his soul that spirit of intrepidity, and that fire of the Holy Ghost, with which he was filled at his ordination; gives him instructions concerning the heretics of that time, and adds a lively description of such as would afterwards arise. We learn that St. Timothy drank only water: but his austerities having prejudiced his health, on account of his weak stomach and frequent infirmities, St. Paul ordered him to use a little wine. The fathers observe that he only says a little, even in that necessity, because the flesh is to be kept weak, that the spirit may be vigorous and strong. St. Timothy was then young: perhaps about forty. It is not improbable that he went to Rome to confer with his master. In the year 64 he was made by St. Paul bishop of Ephesus, before St. John arrived there, who resided also in that city as an apostle, and exercising a general inspection over all the churches of Asia. St. Timothy is styled a martyr in the ancient martyrologies. His acts, in some copies ascribed to the famous Polycrates, bishop of Ephesus, but which seem to have been written at Ephesus, in the fifth or sixth age, and abridged by Photius, relate, that under the emperor Nerva, in the year 97, St. John being still in the isle of Patmos, St. Timothy was slain with stones and clubs by the heathens, while he was endeavoring to oppose their idolatrous ceremonies on one of their festivals called Catagogia, kept on the 22d of January, on which the idolaters walked in troops, every one carrying in one hand an idol, and in the other a club. St. Paulinus, Theodorus Lector, and Philostorgius, inform us, that his relics were with great pomp translated to Constantinople in the year 356, in the reign of Constantius. St. Paulinus witnesses that the least portion of them wrought many miracles wherever they were distributed. These precious remains, with those of St. Andrew. and St. Luke, were deposited under the altar, in the church of the apostles in that city, where the devils, by their howlings, testified how much they felt their presence, says St. Jerome; which St. Chrysostom also confirms.

Connection for our times: One thing that stands out in the life of Timothy is the power of the Holy Ghost in the office of a Bishop. In our times, we struggle under weak leadership from the majority of our bishops. There are good bishops, to be sure, and they should be praised, but it is sadly a rare occurrence. Let this be a reminder for us to pray fervently for our bishops, as the same power of the Holy Ghost that ordained Timothy is still active in the succession of bishops to our day.