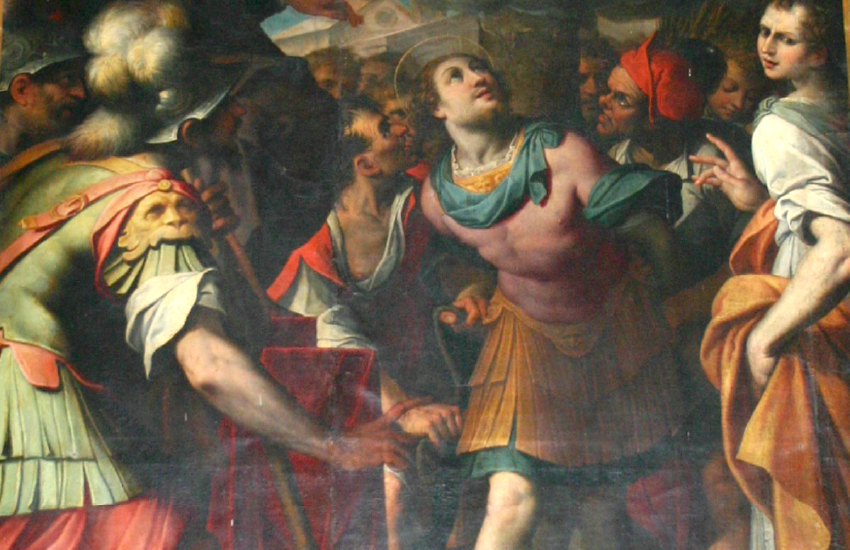 ST. THEODORE was born of a noble family in the East, and enrolled while still a youth in the imperial army. Early in 306 the emperor put forth an edict requiring all Christians to offer sacrifice, and Theodore had just joined the legion and marched with them into Pontus, when he had to choose between apostasy and death. He declared before his commander that he was ready to be cut in pieces and offer up every limb to his Creator, Who had died for him. Wishing to conquer him by gentleness, the commander left him in peace for a while, that he might think over his resolution; but Theodore used his freedom to set on fire the great temple of Isis, and made no secret of this act. Still his judge entreated him to renounce his faith and save his life; but Theodore made the sign of the cross, and answered: “As long as I have breath, I will confess the name of Christ.” After cruel torture, the judge bade him think of the shame to which Christ had brought him. “This shame,” Theodore answered, “I and all who invoke His name take with joy.” He was condemned to be burnt. As the flame rose, a Christian saw his soul rise like a flash of light to heaven.

Reflection. —We are enlisted in the same service as the holy martyrs, and we too must have courage and constancy if we would be perfect soldiers of Jesus Christ. Let us take our part with them in confessing the faith of Christ and despising the world, that we may have our part with them in Christ’s kingdom.
Lives Of The Saints By Alban Butler, Benziger Bros. Edition www.globalgrey.co.uk