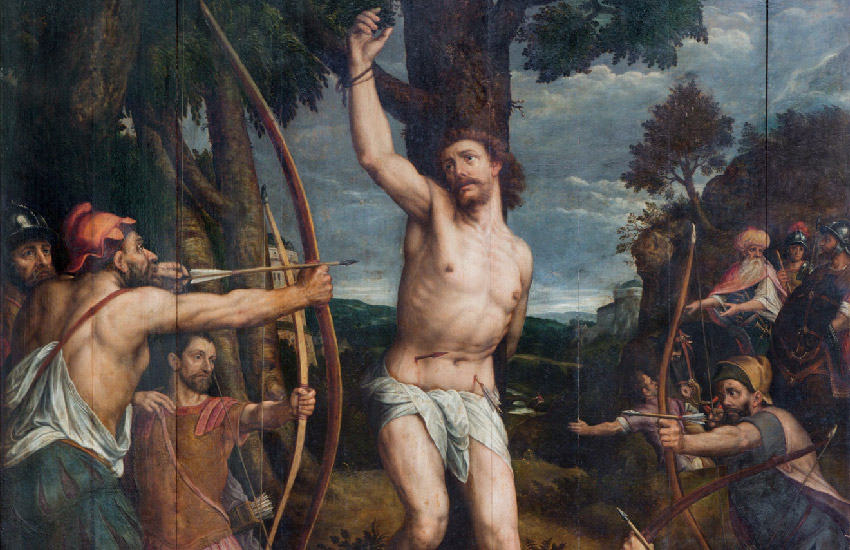 SEBASTIAN was an officer in the Roman army, esteemed even by the heathen as a good soldier, and honored by the Church ever since as a champion of Jesus Christ. Born at Narbonne, Sebastian came to Rome about the year 284, and entered the lists against the powers of evil. He found the twin brothers Marcus and Marcellinus in prison for the faith, and, when they were near yielding to the entreaties of their relatives, encouraged them to despise flesh and blood, and to die for Christ. God confirmed his words by miracle: light shone around him while he spoke; he cured the sick by his prayers; and in this divine strength he led multitudes to the faith, among them the Prefect of Rome, with his son Tiburtius. He saw his disciples die before him, and one of them came back from heaven to tell him that his own end was near. It was in a contest of fervor and charity that St. Sebastian found the occasion of martyrdom. The Prefect of Rome, after his conversion, retired to his estates in Campania, and took a great number of his fellow-converts with him to this place of safety. It was a question whether Polycarp the priest or St. Sebastian should accompany the neophytes. Each was eager to stay and face the danger at Rome, and at last the Pope decided that the Roman church could not spare the services of Sebastian. He continued to labor at the post of danger till he was betrayed by a false disciple. He was led before Diocletian, and, at the emperor’s command, pierced with arrows and left for dead. But God raised him up again, and of his own accord he Went before the emperor and conjured him to stay the persecution of the Church. Again sentenced, he was at last beaten to death by clubs, and crowned his labors by the merit of a double martyrdom.

Reflection. —Your ordinary occupations will give you opportunities of laboring for the faith. Ask help from St. Sebastian. He was not a priest nor a religious, but a soldier.