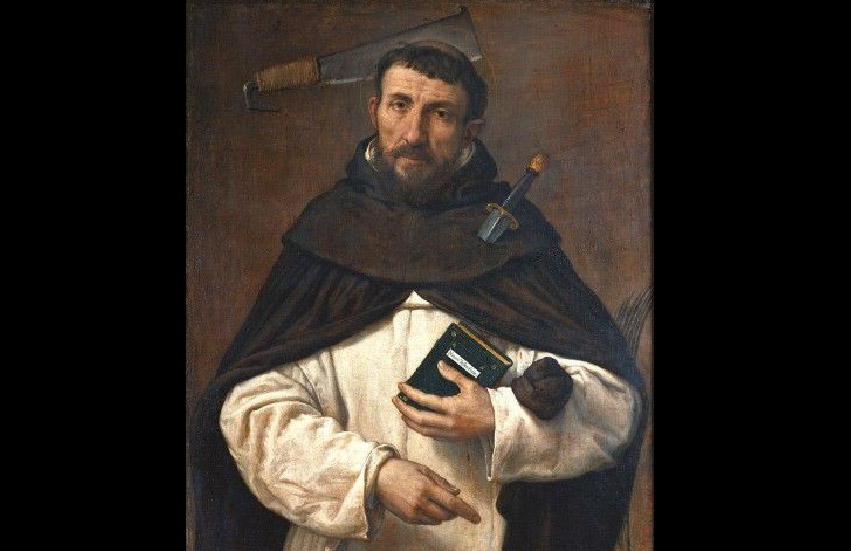 IN 1205, the glorious martyr Peter was born at Verona of heretical parents. He went to a Catholic school, and his Manichean uncle asked what he learnt. “The Creed,” answered Peter; “I believe in God, Creator of heaven and earth.” No persuasion could shake his faith, and at fifteen he received the habit from St. Dominic himself at Bologna. After ordination, he preached to the heretics of Lombardy, and converted multitudes. St. Peter was constantly obliged to dispute with heretics, and although he was able to confound them, still the devil took occasion thence to tempt him once against faith. Instantly he had recourse to prayer before an image of Our Lady, and heard a voice saying to him the words of Jesus Christ in the Gospel, “I have prayed for thee, Peter, that thy faith may not fail; and thou shalt confirm thy brethren in it.” Once when exhorting a vast crowd under the burning sun, the heretics defied him to procure shade. He prayed, and a cloud overshadowed the audience. In spite of his sanctity, he was foully slandered and even punished for immorality. He submitted humbly, but complained in prayer to Jesus crucified. The crucifix spoke, “And I, Peter, what did I do?” Every day, as he elevated at Mass the precious blood, he prayed, “Grant, Lord, that I may die for Thee, Who for me didst die.” His prayer was answered. The heretics, confounded by him, sought his life. Two of them attacked him as he was returning to Milan, and struck his head with an axe. St. Peter fell, commended himself to God, dipped his finger in his own blood, and wrote on the ground, “I believe in God, Creator of heaven and earth.” They then stabbed him in the side, and he received his crown.

Reflection. —From a boy, St. Peter boldly professed his faith among heretics. He spent his life in preaching the faith to heretics, and received the glorious and long-desired crown of martyrdom from heretics. We are surrounded by heretics. Are we courageous, firm, zealous, full of prayer for their conversion, unflinching in our profession of faith?