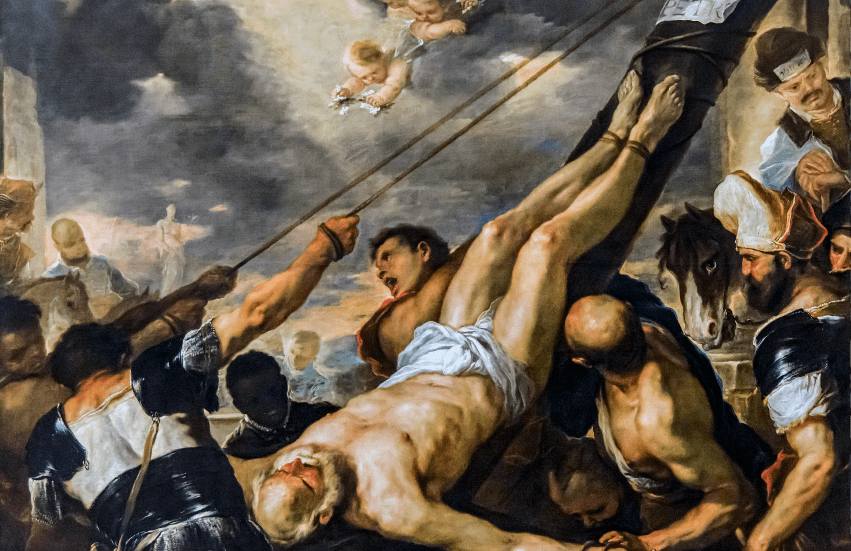 PETER was of Bethsaida in Galilee, and as he was fishing on the lake was called by Our Lord to be one of His apostles. He was poor and unlearned, but candid, eager, and loving. In his heart, first of all, grew up the conviction, and from his lips came the confession, “Thou art the Christ, the Son of the living God;” and so Our Lord chose him, and fitted him to be the Rock of His Church, His Vicar on earth, the head and prince of His apostles, the Centre and very principle of the Church’s oneness, the source of all spiritual powers, and the unerring teacher of His truth. All Scripture is alive with him; but after Pentecost he stands out in the full grandeur of his office. He fills the vacant apostolic throne; admits the Jews by thousands into the fold; opens it to the Gentiles in the person of Cornelius; founds, and for a time rules, the Church at Antioch, and sends Mark to found that of Alexandria. Ten years after the Ascension he went to Rome, the centre of the majestic Roman Empire, where were gathered the glories and the wealth of the earth and all the powers of evil. There he established his Chair, and for twenty-five years labored with St. Paul in building up the great Roman Church. He was crucified by order of Nero, and buried on the Vatican Hill. He wrote two Epistles, and suggested and approved the Gospel of St. Mark. Two hundred and sixty years after St. Peter’s martyrdom came the open triumph of the Church. Pope St. Sylvester, with bishops and clergy and the whole body of the faithful, went through Rome in procession to the Vatican Hill, singing the praises of God till the seven hills rang again. The first Christian emperor, laying aside his diadem and his robes of state, began to dig the foundations of St. Peter’s Church. And now on the site of that old church stands the noblest temple ever raised by man; beneath a towering canopy lie the great apostles, in death, as in life, undivided; and there is the Chair of St. Peter. All around rest the martyrs of Christ—Popes, Saints, Doctors, from east and west—and high over all, the words, “Thou art Peter, and on this Rock I will build My Church.” It is the threshold of the apostles and the Centre of the world.

Reflection. —Peter still lives on in his successors, and rules and feeds the flock committed to him. The reality of our devotion to him is the surest test of the purity of our faith.