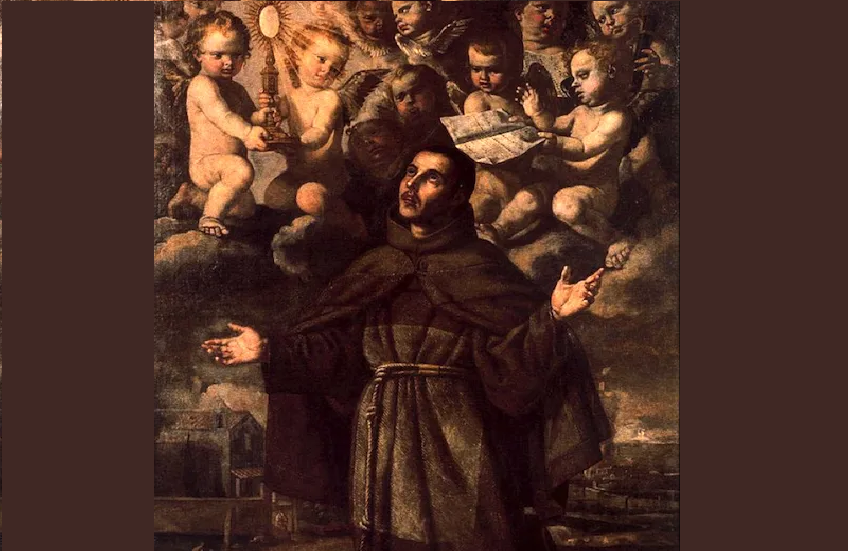 FROM a child Paschal seems to have been marked out for the service of God; and amidst his daily labors he found time to instruct and evangelize the rude herdsmen who kept their flocks on the hills of Arragon. At the rage of twenty-four he entered the Franciscan Order, in which, however, he remained, from humility, a simple lay-brother, and occupied himself, by preference, with the roughest and most servile tasks. He was distinguished by an ardent love and devotion to the Blessed Sacrament. He would spend hours on his knees before the tabernacle—often he was raised from the ground in the fervor of his prayer—and there, from the very and eternal Truth, he drew such stores of wisdom that, unlettered as he was, he was counted by all a master in theology and spiritual science. Shortly after his profession he was called to Paris on business connected with his Order. The journey was full of peril, owing to the hostility of the Huguenots, who were numerous at the time in the south of France; and on four separate occasions Paschal was in imminent danger of death at the hands of the heretics. But it was not God’s will that His servant should obtain the crown of martyrdom which, though judging himself all unworthy of it, he so earnestly desired, and he returned in safety to his convent, where he died in the odor of sanctity, May 15, 1592.
As Paschal was watching his sheep on the mountainside, he heard the consecration bell ring out from a church in the valley below, where the villagers were assembled for Mass. The Saint fell on his knees, when suddenly there stood before him an angel of God, bearing in his hands the Sacred Host, and offering it for his adoration. Learn from this how pleasing to Jesus Christ are those who honor Him in this great mystery of His love; and how to them especially this promise is fulfilled: “I will not leave you orphans: I will come unto you ” (John xiv. 18) .

Reflection. —St. Paschal teaches us never to suffer a day to pass without visiting Jesus in the narrow chamber where He, Whom the heaven itself cannot contain, abides day and night for our sake.