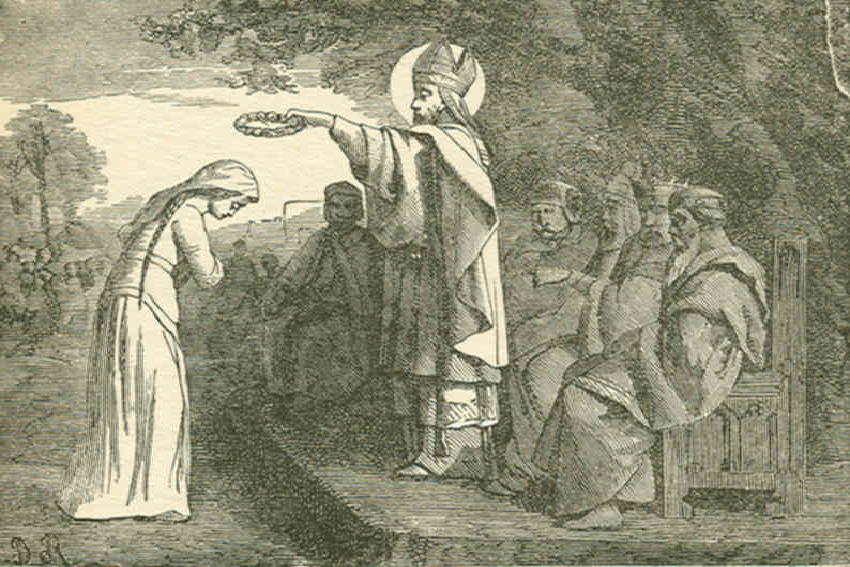 ST. MEDARD, one of the most illustrious prelates of the Church of France in the sixth century, was born of a pious and noble family, at Salency, about the year 457. From his childhood he evinced the most tender compassion for the poor. On one occasion he gave his coat to a destitute blind man, and when asked why he had done so, he answered that the misery of a fellow-member in Christ so affected him that he could not help giving him part of his own clothes. Being promoted to the priesthood in the thirty-third year of his age, he became a bright ornament of that sacred order. He preached the word of God with an unction which touched the hearts of the most hardened; and the influence of his example, by which he enforced the precepts which he delivered from the pulpit, seemed irresistible. In 530, Alomer, the thirteenth bishop of that country, dying, St. Medard was unanimously chosen to fill the see, and was consecrated by St. Remigius, who had baptized King Clovis in 496, and was then exceeding old. Our Saint’s new dignity did not make him abate anything of his austerities, and, though at that time seventy-two years old, he thought himself obliged to redouble his labors. Though his diocese was very wide, it seemed not to suffice for his zeal, which could not be confined; wherever he saw the opportunity of advancing the honor of God, and of abolishing the remains of idolatry, he overcame all obstacles, and by his zealous labors and miracles the rays of the Gospel dispelled the mists of idolatry throughout the whole extent of his diocese. What rendered this task more difficult and perilous was the savage and fierce disposition of the ancient inhabitants of Flanders, who were the most barbarous of all the nations of the Gauls and Franks. Our Saint, having completed this great work in Flanders, returned to Noyon, where he shortly after fell sick, and soon rested from his labors at an advanced age, in 545. The whole kingdom lamented his death as the loss of their common father and protector. His body was buried in his own cathedral, but the many miracles wrought at his tomb so moved King Clotaire that he translated the precious remains to Soissons.

Reflection. —The Church takes delight in styling her founder “THE AMIABLE JESUS,” and He likewise says of Himself, “I am meek and humble of heart.”