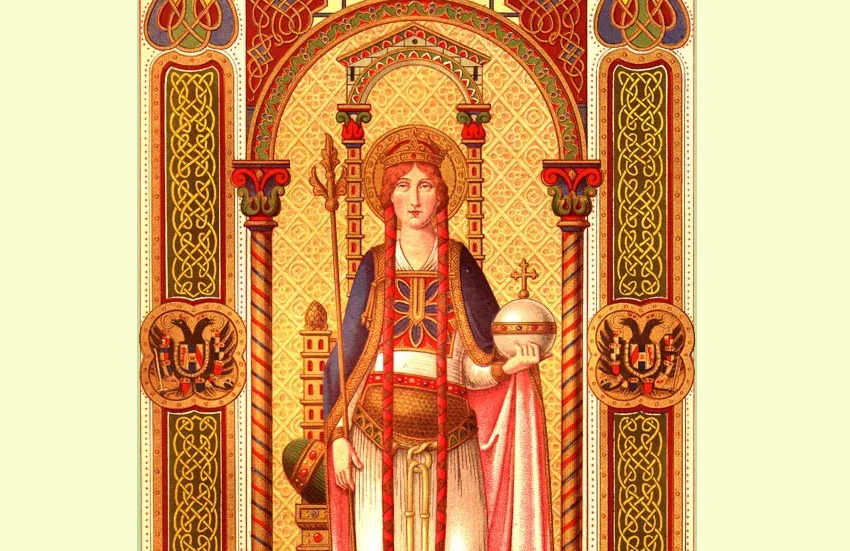 THIS princess was daughter of Theodoric, a powerful Saxon count. Her parents placed her very young in the monastery of Erford, of which her grandmother Maud was then abbess. Our Saint remained in that house, an accomplished model of all virtues, till her parents married her to Henry, son of Otho, Duke of Saxony, in 913, who was afterwards chosen king of Germany. He was s pious and victorious prince, and very tender of his subjects. Whilst by his arms he checked the insolence of the Hungarians and Danes, and enlarged his dominions by adding to them Bavaria, Maud gained domestic victories over her spiritual enemies more worthy of a Christian and far greater in the eyes of Heaven. She nourished the precious seeds of devotion and humility in her heart by assiduous prayer and meditation. It was her delight to visit, comfort, and exhort the sick and the afflicted; to serve and instruct the poor, and to afford her charitable succor to prisoners. Her husband, edified by her example, concurred with her in every pious undertaking which she projected. After twenty-three years’ marriage God was pleased to call the king to himself, in 936. Maud, during his sickness, went to the church to pour forth her soul in prayer for him at the foot of the altar. As soon as she understood, by the tears and cries of the people, that he had expired, she called for a priest that was fasting to offer the holy sacrifice for his soul. She had three sons: Otho, afterwards emperor; Henry, Duke of Bavaria; and St. Brunn, Archbishop of Cologne. Otho was crowned king of Germany in 937, and emperor at Rome in 962, after his victories over the Bohemians and Lombards. The two oldest sons conspired to strip Maud of her dowry, on the unjust pretence that she had squandered the revenues of the state on the poor. The unnatural princes at length repented of their injustice, and restored to her all that had been taken from her. She then became more liberal in her alms than ever, and founded many churches, with five monasteries. In her last sickness she made her confession to her grandson William, the Archbishop of Mentz, who yet died twelve days before her, on his road home. She again made a public confession before the priests and monks of the place, received a second time the last sacraments, and, lying on a sack-cloth, with ashes on her head, died on the 14th of March in 968.

Reflection. —The beginning of true virtue is most ardently to desire it, and to ask it of God with the utmost assiduity and earnestness. Fervent prayer, holy meditation, and reading pious books, are the principal means by which this virtue is to be constantly improved, and the interior life of the soul to be strengthened.