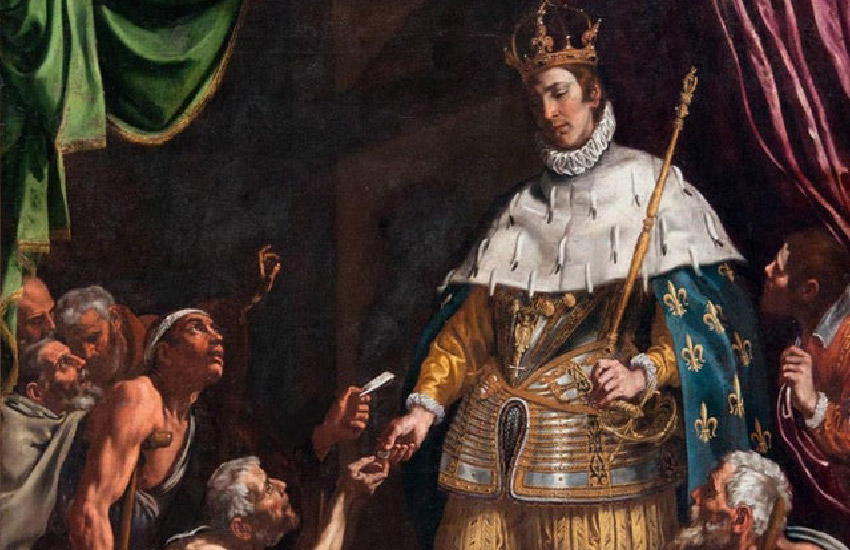 THE mother of Louis told him she would rather see him die than commit a mortal sin, and he never forgot her words. King of France at the age of twelve, he made the defence of God’s honor the aim of his life. Before two years, he had crushed the Albigensian heretics, and forced them by stringent penalties to respect the Catholic faith. Amidst the cares of government, he daily recited the Divine Office and heard two Masses, and the most glorious churches in France are still monuments of his piety. When his courtiers remonstrated with Louis for his law that blasphemers should be branded on the lips, he replied, “I would willingly have my own lips branded to root out blasphemy from my kingdom.” The fearless protector of the weak and the oppressed, he was chosen to arbitrate in all the great feuds of his age, between the Pope and the Emperor, between Henry III. and the English barons. In 1248, to rescue the land which Christ had trod, he gathered round him the chivalry of France, and embarked for the East. There, before the infidel, in victory or defeat, on the bed of sickness or a captive in chains, Louis showed himself ever the same,—the first, the best, and the bravest of Christian knights. When a captive at Damietta, an Emir rushed into his tent brandishing a dagger red with the blood of the Sultan, and threatened to stab him also unless he would make him a knight, as the Emperor Frederick had Facardin. Louis calmly replied that no unbeliever could perform the duties of a Christian knight. In the same captivity he was offered his liberty on terms lawful in themselves, but enforced by an oath which implied a blasphemy, and though the infidels held their swords’ points at his throat, and threatened a massacre of the Christians, Louis inflexibly refused. The death of his mother recalled him to France; but when order was reestablished he again set forth on a second crusade. In August, 1270, his army landed at Tunis, and, though victorious over the enemy, succumbed to a malignant fever. Louis was one of the victims. He received the Viaticum kneeling by his camp-bed, and gave up his life with the same joy that he had given all else for the honor of God.

Reflection. —If we cannot imitate St. Louis in dying for the honor of God, we can at least resemble him in resenting the blasphemies offered against God by the infidel, the heretic, and the scoffer.