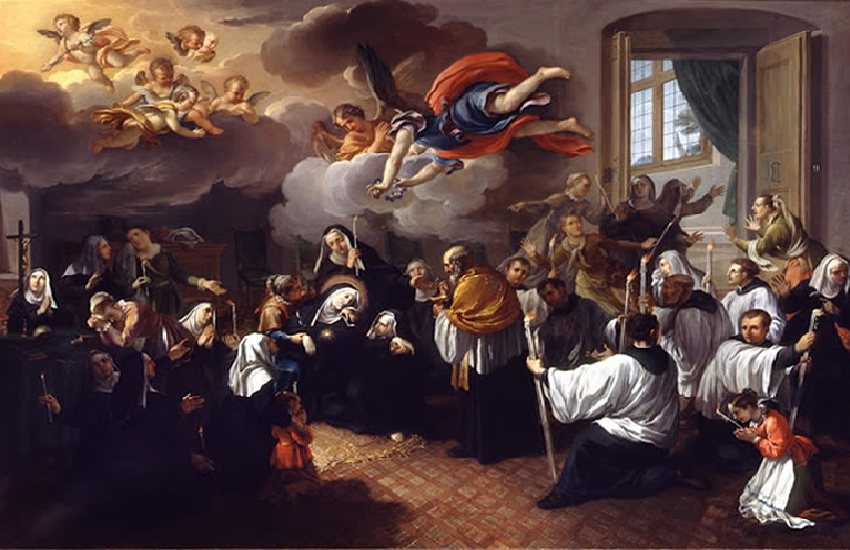 JULIANA FALCONIERI was born in answer to prayer, in 1270. Her father built the splendid church of the Annunziata in Florence, while her uncle, Blessed Alexius, became one of the founders of the Servite Order. Under his care Juliana grew up, as he said, more like an angel than a human being. Such was her modesty that she never used a mirror or gazed upon the face of a man during her whole life. The mere mention of sin made her shudder and tremble, and once hearing a scandal related she fell into a dead swoon. Her devotion to the sorrows of Our Lady drew her to the Servants of Mary; and, at the age of fourteen, she refused an offer of marriage, and received the habit from St. Philip Benizi himself. Her sanctity attracted many novices, for whose direction she was bidden to draw up a rule, and thus with reluctance she became foundress of the “Mantellate.” She was with her children as their servant rather than their mistress, while outside her convent she led a life of apostolic charity, converting sinners, reconciling enemies, and healing the sick by sucking with her own lips their ulcerous sores. She was sometimes rapt for whole days in ecstasy, and her prayers saved the Servite Order when it was in danger of being suppressed. She was visited in her last hour by angels in the form of white doves, and Jesus Himself, as a beautiful child, crowned her with a garland of flowers. She wasted away through a disease of the stomach, which prevented her taking food. She bore her silent agony with constant cheerfulness, grieving only for the privation of Holy Communion. At last, when, in her seventieth year, she had sunk to the point of death, she begged to be allowed once more to see and adore the Blessed Sacrament. It was brought to her cell, and reverently laid on a corporal, which was placed over her heart. At this moment she expired, and the Sacred Host disappeared. After her death the form of the Host was found stamped upon her heart in the exact spot over which the Blessed Sacrament ì had been placed. Juliana died A. D. 1340.

Reflection. —”Meditate often,” says St. Paul of the Cross, “on the sorrows of the holy Mother, sorrows inseparable from those of her beloved Son. If you seek the Cross, there you will find the Mother; and where the Mother is, there also is the Son.”