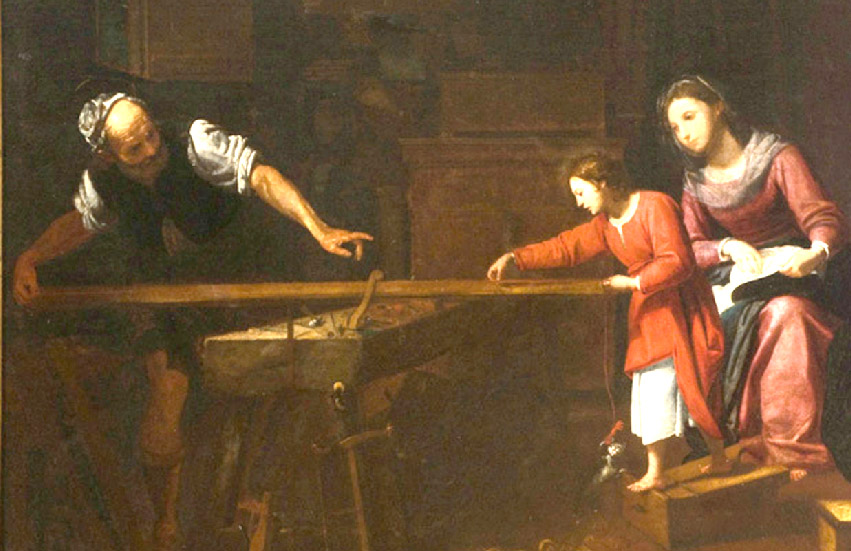 This feast was established in 1955 by Pope Pius XII. It has a strong connection to the Message of Our Lady of Fatima.

First, May has traditionally been considered the Month of Mary. All Catholics are quite familiar with numerous Marian devotions reserved for this month, including the Crowning of Mary by one of the new First Communicants. This is also the month Our Lady chose for Her first apparition to the three shepherd children of Fatima (13 May 1917).

However, in the late 19th century May 1st was chosen as “International Workers’ Day” by Socialists and Communists at an international commerce, in part to commemorate the Haymarket Square riots of Chicago (4 May 1886). Thus, May 1st became an important festival for those who promote the errors of atheistic communism – which Our Lady warned about at Fatima.

In an effort to limit the evils of a growing worldwide communist worker movement, and to curb the unbridled greed of unrestrained capitalism, Pope Leo XIII expounded Catholic teaching that supports the true dignity of every worker: employee and employer alike (See Rerum Novarum, 1891). Subsequent Popes continued to elaborate this “social teaching” in accordance with the principles of Christ and the Gospel, e.g. Pius XI’s Quadragesimo Anno (1931) and Pius XII’s 1942 Christmas Message. Nevertheless, many nations in the world succumbed to the errors of Marxist materialistic atheism.

This is the context in which Pius XII established the feast of St. Joseph the Worker on May 1st in 1955. Traditionally, May 1st had been the feast of the Apostles St. Philip and St. James (which was transferred to May 11th). In 1847, Pius IX had extended a feast under the patronage of St. Joseph to the universal Church and set it for the Third Sunday of Easter. In 1913, St. Pius X transferred this feast to the Wednesday, the weekday dedicated to St. Joseph, just prior to the Third Sunday of Easter. It is this solemnity which Pius XII then transferred to May 1st in order to “Christianize” a day that had been devoted to the world of materialistic work that denies the supernatural and even the very existence of God.

As the solemnity of “St. Joseph the Worker, Spouse of the Blessed Virgin Mary”, Pius XII sought St. Joseph’s patronage for all workers and still paid due reverence and honor to our Blessed Mother on the first day of Her month. By this feast he encouraged all workers to foster a devotion to St. Joseph, the most perfect model any one could have. Here are a few passages from the Breviary[1] for today:

“In order to impress upon men’s minds the dignity of human work and the principles according to which it should be carried on, Pius XII instituted the feast of St. Joseph the Workman that he might serve as model and aid to all workers. From his example, all who exercise various crafts or perform the various kinds of work should learn for what reason and in what spirit they are to earn their pay.

“Thus, while obeying the first command of God, to subdue the earth and to take care of their economic needs, they may at the same time gain the reward of eternal life. For he who took care of the Holy Family of Nazareth by his skill and labour will not fail to extend his protection to his coworkers and to bless them with dwellings in Heaven.

“Most appropriately, the Pope decreed that this feast should be celebrated on the first of May, the day which workers have adopted as their own. The choice gives high hope that this day, dedicated to St. Joseph the Workman, will henceforth no longer inflame hatred and incite dissensions, but, as it recurs yearly, will rather invite all to work ever more earnestly to provide what is still needed for civil peace. There is hope also that the recurrence of this feast will stimulate those in charge of the public welfare to concern themselves with the problems of the just order of human society.”