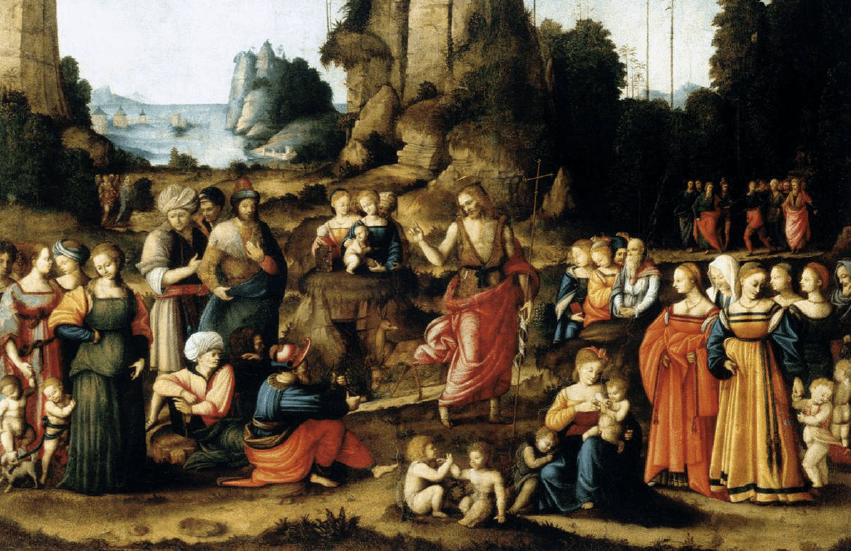 THE birth of St. John was foretold by an angel of the Lord to his father, Zachary, who was offering incense in the Temple. It was the office of St. John to prepare the way for Christ, and before he was born into the world he began to live for the Incarnate God. Even in the womb he knew the presence of Jesus and of Mary, and he leaped with joy at the glad coming of the son of man. In his youth he remained hidden, because He for Whom he waited was hidden also. But before Christ’s public life began, a divine impulse led St. John into the desert; there, with locusts for his food and haircloth on his skin, in silence and in prayer, he chastened his own soul. Then, as crowds broke in upon his solitude, he warned them to flee from the wrath to come, and gave them the baptism of penance, while they confessed their sins. At last there stood in the crowd One Whom St. John did not know, till a voice within told him that it was his Lord. With the baptism of St. John, Christ began His penance for the sins of His people, and St. John saw the Holy Ghost descend in bodily form upon Him. Then the Saint’s work was done. He had but to point his own disciples to the Lamb, he had but to decrease as Christ increased. He saw all men leave him and go after Christ. “I told you,” he said, “that I am not the Christ. The friend of the Bridegroom rejoiceth because of the Bridegroom’s voice. This my joy therefore is fulfilled.” St. John had been cast into the fortress of Machærus by a worthless tyrant whose crimes be had rebuked, and he was to remain there till he was beheaded, at the will of a girl who danced before this wretched king. In this time of despair, if St. John could have known despair, some of his old disciples visited him. St. John did not speak to them of himself, but he sent them to Christ, that they might see the proofs of His mission. Then the Eternal Truth pronounced the panegyric of the Saint who had lived and breathed for Him alone: “Verily I say unto you, Among them that are born of women there hath not risen a greater than John the Baptist”

Reflection. —St. John was great before God because he forgot himself and lived for Jesus Christ, Who is the source of all greatness. Remember that you are nothing; your own will and your own desires can only lead to misery and sin. Therefore sacrifice every day some one of your natural inclinations to the Sacred Heart of Our Lord, and learn little by little to lose yourself in Him.