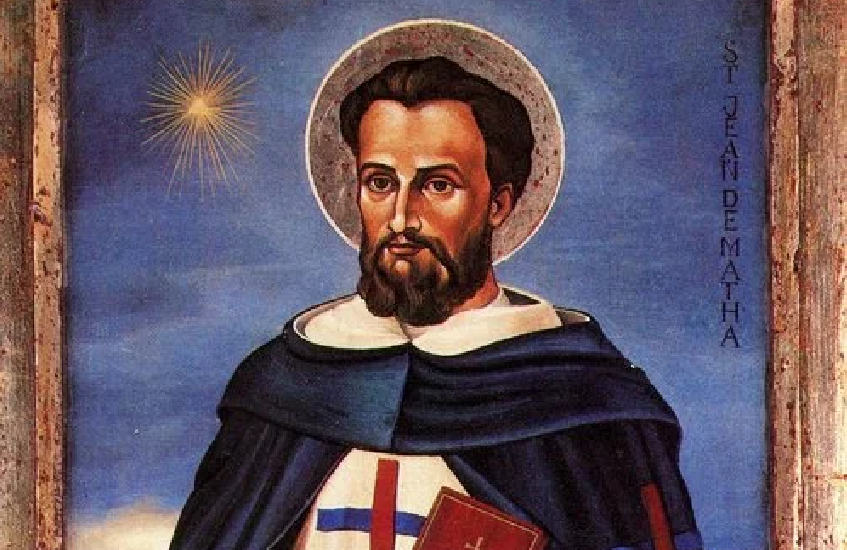 THE life of St. John of Matha was one long course of self-sacrifice for the glory of God and the good of his neighbor. As a child, his chief delight was serving the poor; and he often told them he had come into the world for no other end but to wash their feet. He studied at Paris with such distinction that his professors advised him to become a priest, in order that his talents might render greater service to others; and, for this end, John gladly sacrificed his high rank and other worldly advantages. At his first Mass an angel appeared, clad in white, with a red and blue cross on his breast, and his hands reposing on the heads of a Christian and a Moorish captive. To ascertain what this signified, John repaired to St. Felix of Valois, a holy hermit living near Meaux, under whose direction he led a life of extreme penance. The angel again appeared, and they then set out for Rome, to learn the will of God from the lips of the Sovereign Pontiff, who told them to devote themselves to the redemption of captives. For this purpose they founded the Order of the Holy Trinity. The religious fasted every day, and gathering alms throughout Europe took them to Barbary, to redeem the Christian slaves. They devoted themselves also to the sick and prisoners in all countries. The charity of St. John in devoting his life to the redemption of captives was visibly blessed by God. On his second return from Tunis he brought back one hundred and twenty liberated slaves. But the Moors attacked him at sea, over- i powered his vessel, and doomed it to destruction, with all on board, by taking away the rudder and sails, and leaving it to the mercy of the winds. St. John tied his cloak to the mast, and prayed, saying, “Let God arise, and let His enemies be scattered. O Lord, Thou wilt save the humble, and wilt bring down the eyes of the proud.” Suddenly the wind filled the small sail, and, without guidance, carried the ship safely in a few days to Ostia, the port of Rome, three hundred leagues from Tunis. Worn out by his heroic labors, John died in 1213, at the age of fifty-three.

Reflection. —Let us never forget that our blessed Lord, bade us love our neighbor not only as ourselves, but as He loved us, Who afterwards sacrificed Himself for us. you!
Lives Of The Saints By Alban Butler, Benziger Bros. Edition www.globalgrey.co.uk

Saint John was born in France in 1160. His parents were wealthy and sent him away to
school so that he could receive the best education. He used the money his parents sent him
to help the poor. He spent his free time performing other works of charity and paid visits to
the local hospital to tend the sick.

When John graduated, he moved to a hermitage so he could spend his days in quiet prayer,
but his friends visited him so often that he saw this as a sign from God that he was called to
serve others as a priest. He entered the seminary and was ordained when he was 32 years
old.

While Father Matha was celebrating his first Mass, he had a vision of Christ holding the
hands of two men in chains—on one side was a Christian and on the other was a Moor.
Father Matha lived during the time of the Crusades when Christians fought religious wars
against the Moors. Thousands of Christians had been captured by the Moors and were
forced into slavery, and some were tortured if they would not deny their faith. After his
vision, John thought of a plan to rescue the Christian slaves. He would offer a ransom for

John went to Rome to ask Pope Innocent III for permission to put his plan into action. The
pope was so impressed with John’s idea that he approved the founding of a new religious
order led by John. The community was called the Order of the Holy Trinity. They became
known as the Trinitarians.

The men who joined the order went to Morocco, Tunis, and Spain to ransom Christian slaves
and return them to their homes. The Trinitarians collected the money to pay for the
ransoms by begging for coins from average people and by asking for larger donations from
wealthy benefactors.

John spent the rest of his life working for the freedom of Christians around the world.

Connection for our time: Today Christians face a great persecution in many countries, as
they did during the times of Muslim invasion and slavery. We also face a great slavery of
vice to all the temptations the modern world offers. Let us pray for the intercession of this
great saint for both Christians who are taken captive in other nations, as well as those who
are taken captive by vice all over the world.