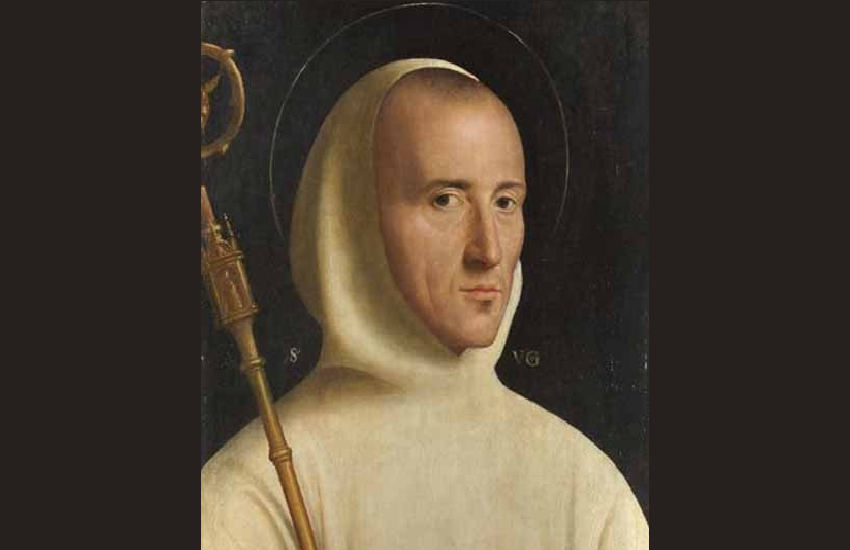 IT was the happiness of this Saint to receive from his cradle the strongest impressions of piety by the example and care of his illustrious and holy parents. He was born at Chateau-neuf, in the territory of Valence in Dauphiné, in 1053. His father, Odilo, who served his country in an honorable post in the army, labored by all the means in his power to make his soldiers faithful servants of their Creator, and by severe punishments to restrain vice. By the advice of his son, St. Hugh, he afterwards became a Carthusian monk, and died at the age of a hundred, having received Extreme Unction and Viaticum from the hands of his son. Our Saint likewise assisted, in her last moments, his mother, who had for many years, under his direction, served God in her own house, by prayer, fasting, and plenteous alms-deeds. Hugh, from the cradle, appeared to be a child of benediction. He went through his studies with great applause, and having chosen to serve God in an ecclesiastical state, he accepted a canonry in the cathedral of Valence. His great sanctity and learning rendered him an ornament of that church, and he was finally made Bishop of Grenoble. He set himself at once to reprove vice and to reform abuses, and so plentiful was the benediction of Heaven upon his labors that he had the comfort to see the face of his diocese in a short time exceedingly changed. After two years he privately resigned his bishopric, presuming on the tacit consent of the Holy See, and, putting on the habit of St. Bennet, he entered upon a novitiate in the austere abbey of Casa-Dei in Auvergne. There he lived a year, a perfect model of all virtues to that house of Saints, till Pope Gregory VII. commanded him, in virtue of holy obedience, to resume his pastoral charge.

He earnestly solicited Pope Innocent II. for leave to resign his bishopric, that he might die in solitude, but was never able to obtain his request. God was pleased to purify his soul by a lingering illness before He called him to Himself. Some time before his death he lost his memory for everything but his prayers. He closed his penitential course on the 1st of April in 1132, wanting only two months of being Eighty years old, of which he had been fifty-two years bishop. Miracles attested the sanctity of his happy death, and he was canonized by Innocent II. in 1134.

Reflection. —Let us learn from the example of the Saints to shun the tumult of the world as much as our circumstances will allow, and give ourselves up to the exercises of holy solitude, prayer, and pious reading.