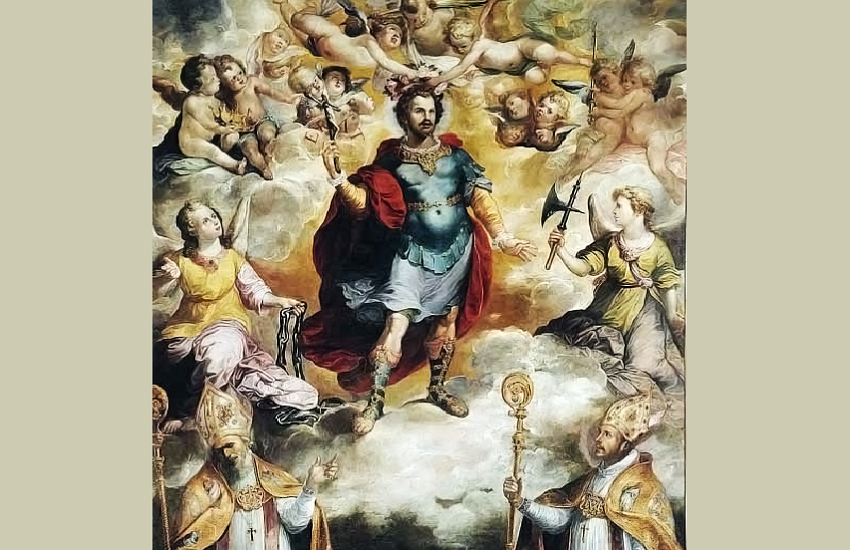 LEOVIGILD, King of the Visigoths, had two sons, Hermenegild and Recared, who reigned conjointly with him. All three were Arians, but Hermenegild married a. zealous Catholic, the daughter of Sigebert, Ring of France, and by her holy example was converted to the faith. His father, on hearing the news, denounced him as a traitor, and marched to seize his person. Hermenegild tried to rally the Catholics of Spain in his defence, but they were too weak to make any stand, and, after a two years fruitless struggle, he surrendered on the assurance of a free pardon. When safely in the royal camp, the king had him loaded with fetters and cast into a foul dungeon at Seville. Tortures and bribes were in turn employed to shake his faith, but Hermenegild wrote to his father that he held the crown as nothing, and preferred to lose sceptre and life rather than betray the truth of God. At length, on Easter night, an Arian bishop entered his cell, and promised him his father’s pardon if he would but receive Communion at his hands. Hermenegild indignantly rejected the offer, and knelt with joy for his depth-stroke. The same night a light streaming from his cell told the Christians who were watching near that the martyr had won his crown, and was keeping his Easter with the Saints in glory.
Leovigild on his death-bed, though still an Arian, bade Recared seek out St. Leander, whom he had himself cruelly persecuted, and, following Hermenegild’s example, be received by him into the Church. Recared did so, and on his father’s death labored so earnestly for the extirpation of Arianism that he brought over the whole nation of the Visigoths to the Church. “Nor is it to be wondered,” says St. Gregory, “that he came thus to be a preacher of the true faith, seeing that he was brother of a martyr, whose merits did help him to bring so many into the lap of God’s Church.”
Reflection. —St. Hermenegild teaches us that constancy and sacrifice are the hest arguments for the Faith, and the surest way to win souls to God.