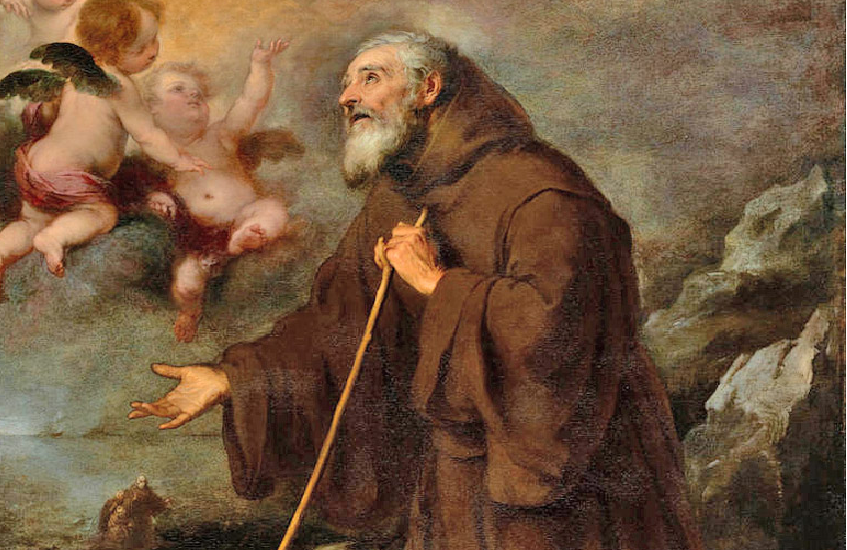 AT the age of fifteen Francis left his poor home at Paola in Calabria, to live as a hermit in a cave by the sea-coast. In time disciples gathered round him, and with them, in 1436, he founded the “Minims,” so called to show that they were the least of monastic Orders. They observed a perpetual Lent, and never touched meat, fish, eggs, or milk. Francis himself made the rock his bed; his best garment was a hair-shirt, and boiled herbs his only fare. As his body withered his faith grew powerful, and he “did all things in Him Who strengthened him.” He cured the sick, raised the dead, averted plagues, expelled evil spirits, and brought sinners to penance. A famous preacher, instigated by a few misguided monks, set to work to preach against St. Francis and his miracles. The Saint took no notice of it, and the preacher, finding that he made no way with his hearers, determined to see this poor hermit and confound him in person. The Saint received him kindly, gave him a seat by the fire, and listened to a long exposition of his own frauds. He then quietly took some glowing embers from the fire, and closing his hands upon them unhurt, said, “Come, Father Anthony, warm yourself, for you are shivering for want of a little charity” Father Anthony, falling at the Saint’s feet, asked for pardon, and then, having received his embrace, quitted him, to become his panegyrist and attain himself to great perfection. When the avaricious King Ferdinand of Naples offered him money for his convent, Francis told him to give it back to his oppressed subjects, and softened his heart by causing blood to flow from the ill-gotten coin. Louis XI. of France, trembling at the approach of death, sent for the poor hermit to ward off the foe whose advance neither his fortresses nor his guards could check. Francis went by the Pope’s command, and prepared the king for a holy death. The successors of Louis showered favors on the Saint, his Order spread throughout Europe, and his name was reverenced through the Christian world. He died at the age of ninety-one, on Good Friday, 1507, with the crucifix in his hand, and the last words of Jesus on hiss lips, “Into Thy hands, O Lord, I commend my spirit.”

Reflection. —Rely in all difficulties upon God. That which enabled St. Francis to work miracles will in proportion do wonders for yourself, by giving you strength and consolation.