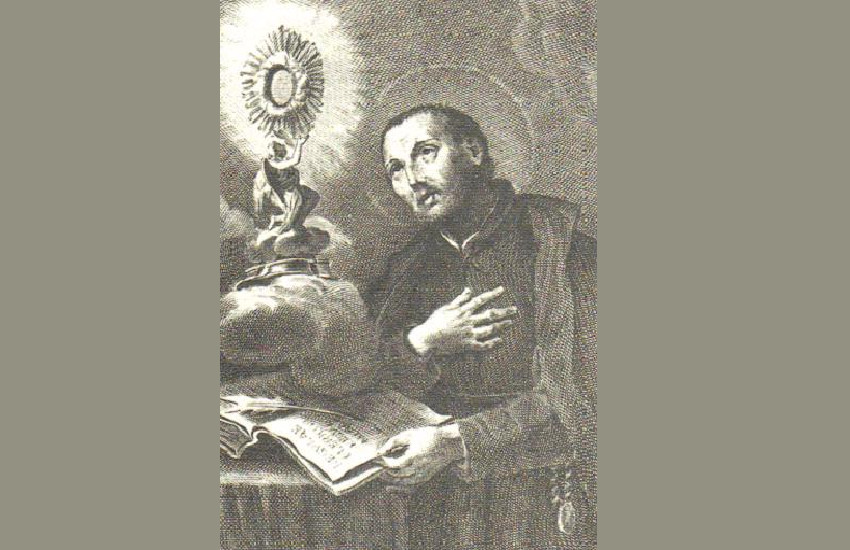 FRANCIS was born in the kingdom of Naples, of the princely family of Caracciolo. In childhood he shunned all amusements, recited the Rosary regularly, and loved to visit the Blessed Sacrament and to distribute his food to the poor. An attack of leprosy taught him the vileness of the human body and the vanity of the world.

Almost miraculously cured, he renounced his home to study for the priesthood at Naples, where he spent his leisure hours in the prisons or visiting the Blessed Sacrament in unfrequented churches. God called him, when only twenty-five, to found an Order of Clerks Regular, whose rule was that each day one father fasted on bread and water, another took the discipline, a third wore a hair-shirt, while they always watched by turns in perpetual adoration before the Blessed Sacrament. They took the usual vows, adding a fourth—not to desire dignities. To establish his Order, Francis undertook many journeys through Italy and Spain, on foot and without money, content with the shelter and crusts given him in charity. Being elected general, he redoubled his austerities, and devoted seven hours daily to meditation on the Passion, besides passing most of the night praying before the Blessed Sacrament. Francis was commonly called the Preacher of Divine Love. But it was before the Blessed Sacrament that his ardent devotion was most clearly perceptible. In presence of his divine Lord his face usually emitted brilliant rays of light; and he often bathed the ground with his tears when he prayed, according to his custom, prostrate on his face before the tabernacle, and constantly repeating, as one devoured by internal fire, “The zeal of Thy house hath eaten me up.” He died of fever, aged forty-four, on the eve of Corpus Christi, 1608, saying, “Let us go, let us go to heaven!” When his body was opened after death, his heart was found as it were burnt up, and these words imprinted around it: “Zelus domus Tuæ comedit me”—”The zeal of Thy house hath eaten me up.”

Reflection. —It is for men, and not for angels, that our blessed Lord resides upon the altar. Yet angels throng our churches to worship Him while men desert Him. Learn from St. Francis to avoid such ingratitude, and to spend, as he did, every possible moment before the Most Holy Sacrament.