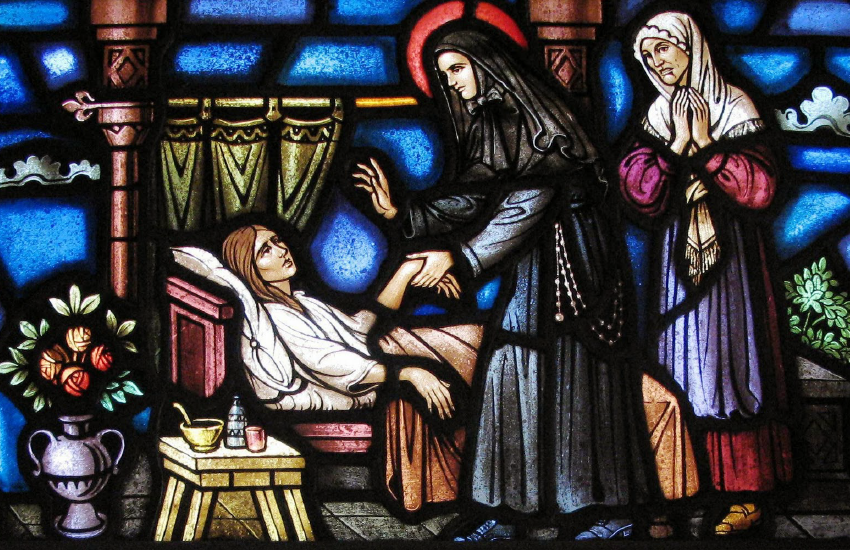 Saint Frances Xavier Cabrini was born at St. Angelo on July 15, 1850. A few hours after her birth a clock of white doves alighted in the courtyard, in which her father had spread the grain to dry. Fearing that the doves might damage the grain, he drove them away, but vainly so. They returned again and again, it was a happy omen! When seven, she was confirmed, and at ten she received first holy Communion. As a child, she was so modest and amiable that she was name “the little Saint.” She like to play with dolls dressed as Nuns, who she ruled as a little abbess, and making small paper boats, she would fill them with violets, and placing them on the water, she imagined she was sending Missionaries to pagan lands. She received her early education from her Sister Rose, a licensed teach. When thirteen, she entered the school of the Daughters of the Sacred Heart at Arluno, and at eighteen, having succeeded brilliantly in her studies, was granted a normal school certificate. Then she went home, losing her parents through death in the flowing years.

She landed in America on March 31, 1889, and immediately set to work, a work that lasted until her death. For the Italian children, she erected schools, kindergartens, orphanages, hospitals and free dispensaries. She became active in all kinds of social welfare work. In 37 years she erected 67 houses in Europe and America.

Reflection. — “Therefore I endure all things for the sake of the elect, that they also may obtain the salvation which is in Christ Jesus, with heavenly glory.” (2 Tim. 2, 10)