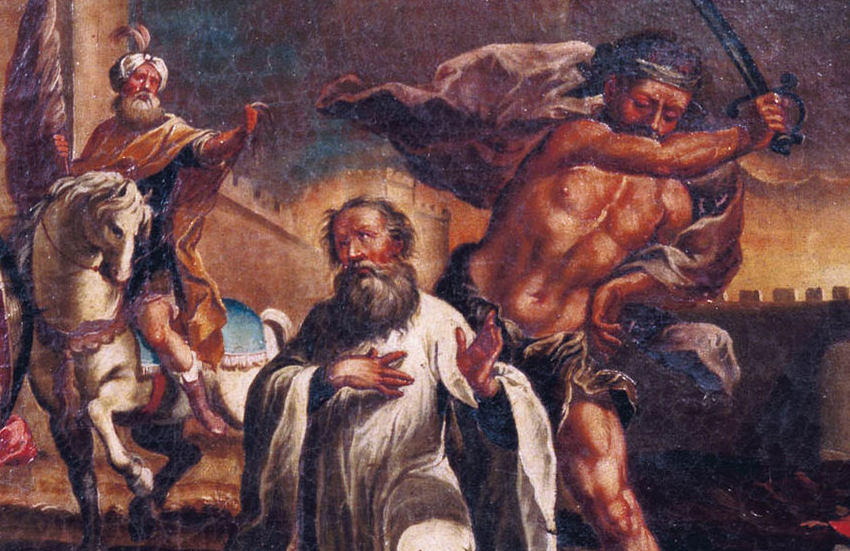 ST. EULOGIUS was of a senatorian family of Cordova, at that time the capital of the Moors in Spain. Our Saint was educated among the clergy of the Church of St. Zoilus, a martyr who suffered with nineteen others under Diocletian. Here he distinguished himself, by his virtue and learning, and, being made priest, was placed at the head of the chief ecclesiastical school at Cordova. He joined assiduous watching, fasting, and prayer to his studies, and his humility, mildness, and charity gained him the affection and respect of every one. During the persecution raised against the Christians in the year 850, St. Eulogius was thrown into prison and there wrote his Exhortation to Martyrdom, addressed to the virgins Flora and Mary, who were beheaded the 24th of November, 851. Six days after their death Eulogius was set at liberty. In the year 852 several others suffered the like martyrdom. St. Eulogius encouraged all these martyrs to their triumphs, and was the support of that distressed flock. The Archbishop of Toledo dying in 858. St. Eulogius was elected to succeed him; but there was some obstacle that hindered him from being consecrated, though he did not outlive his election two months. A virgin, by name Leocritia, of a noble family among the Moors, had been instructed from her infancy in the Christian religion by one of her relatives, and privately baptized. Her father and mother used her very ill, and scourged her day and night to compel her to renounce the Faith. Having made her condition known to St. Eulogius and his sister Anulona, intimating that she desired to go where she might freely exercise her religion, they secretly procured her the means of getting away, and concealed her for some time among faithful friends. But the matter was at length discovered, and they were all brought before the cadi, who threatened to have Eulogius scourged to death. The Saint told him that his torments would be of no avail, for he would never change his religion. Whereupon the cadi gave orders that he should be carried to the palace and be presented before the king’s council. Eulogius began boldly to propose the truths of the Gospel to them. But, to prevent their hearing him, the council condemned him immediately to lose his head. As they were leading him to execution, one of the guards gave him a blow on the face, for having spoken against Mahomet; he turned the other cheek, and patiently received a second. He received the stroke of death with great cheerfulness, on the 11th of March, 859. St. Leocritia was beheaded four days after him, and her body thrown into the river Guadalquivir, but taken out by the Christians.

Reflection. —Beg of God, through the intercession of these holy martyrs, the gift of perseverance. Their example will supply you with an admirable rule for obtain., ing this crowning gift. Remember that you have renounced the world and the devil once for all at your Baptism. Do not hesitate; do not look back; do not listen to suggestions against faith or virtue; but advance, day by day, along the road which you have chosen, to Gods Who is your portion forever. Mass.
Lives Of The Saints By Alban Butler, Benziger Bros. Edition www.globalgrey.co.uk