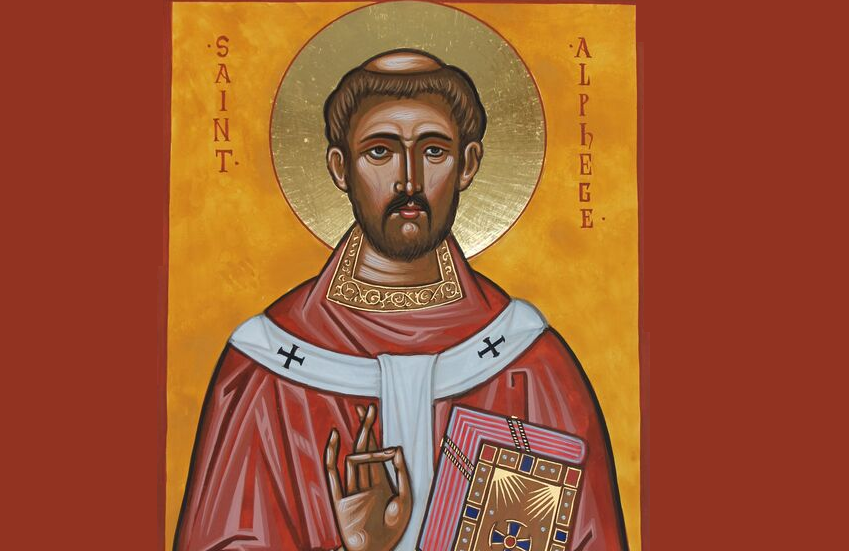 ST. ELPHEGE was born in the year 954, of a noble Saxon family. He first became a monk in the monastery of Deerhurst, near Tewkesbury, England, and afterwards lived as a hermit near Bath, where he founded a community under the rule of St. Benedict, and became its first abbot. At thirty years of age he was chosen Bishop of Winchester, and twenty-two years later he became Archbishop of Canterbury. In 1011, when the Danes landed in Kent and took the city of Canterbury, putting all to fire and sword, St. Elphege was captured and carried off in the expectation of a large ransom. He was unwilling that his ruined church and people should be put to such expense, and was kept in a loathsome prison at Greenwich for seven months. While so confined some friends came and urged him to lay a tax upon his tenants to raise the sum demanded for his ransom. “What reward can I hope for,” said he, “if I spend upon myself what belongs to the poor? Better give up to the poor what is ours, than take from them the little which is their own.” As he still refused to give ransom, the enraged Danes fell upon him in a fury, beat him with the blunt sides of their weapons, and bruised him with stones until one, whom the Saint had baptized shortly before, put an end to his sufferings by the blow of an axe. He died on Easter Saturday, April 19, 1012, his last words being a prayer for his murderers. His body was first buried in St. Paul’s, London, but was afterwards translated to Canterbury by King Canute. A church dedicated to St. Elphege still stands upon the place of his martyrdom at Greenwich.

Reflection. —Those who are in high positions should consider themselves as stewards rather than masters of the wealth or power intrusted to them for the benefit of the poor and weak. St. Elphege died rather than extort his ransom from the poor tenants of the Church lands.