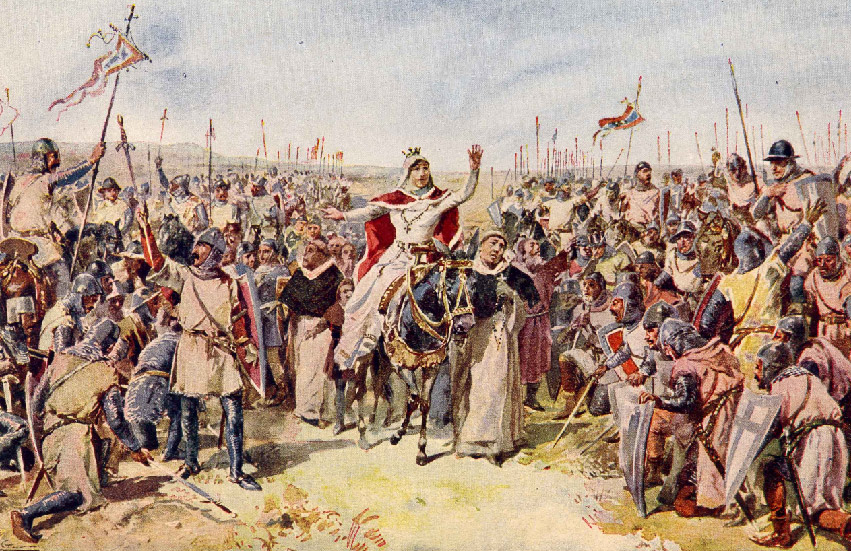 ELIZABETH was born in 1271. She was daughter of Pedro III. of Arragon, being named after her aunt, St. Elizabeth of Hungary. At twelve years of age she was given in marriage to Denis, King of Portugal, and from a holy child became a saintly wife. She heard Mass and recited the Divine Office daily, but her devotions were arranged with such prudence that they interfered with no duty of her state. She prepared for her frequent communions by severe austerities, fasting thrice a week, and by heroic works of charity. She was several times called on to make peace between her husband and her son Alphonso, who had taken up arms against him. Her husband tried her much, both by his unfounded jealousy and by his infidelity to herself. A slander affecting Elizabeth and one of her pages made the king determine to slay the youth, and he told a lime-burner to cast into his kiln the first page who should arrive with a royal message. On the day fixed the page was sent; but the boy, who was in the habit of hearing Mass daily, stopped on his way to do so. The king, in suspense, sent a second page, the very originator of the calumny, who, coming first to the kiln, was at once cast into the furnace and burned. Shortly after, the first page arrived from the church, and took back to the king the lime-burner’s reply that his orders had been fulfilled. Thus hearing Mass saved the page’s life and proved the queen’s innocence. Her patience, and the wonderful sweetness with which she even cherished the children of her rivals, completely won the king from his evil ways, and he became a devoted husband and a truly Christian king. She built many charitable institutions and religious houses, among others a convent of Poor Clares. After her husband’s death, she wished to enter their Order; but being dissuaded by her people, who could not do without her, she took the habit of the Third Order of St. Francis, and spent the rest of her life in redoubled austerities and almsgiving. She died at the age of sixty-five, while in the act of making peace between her children.

Reflection. —In the Holy Sacrifice of the Altar St. Elizabeth daily found strength to bear with sweetness suspicion and cruelty; and by that same Holy Sacrifice her innocence was proved. What succor do we forfeit by neglect of daily Mass!