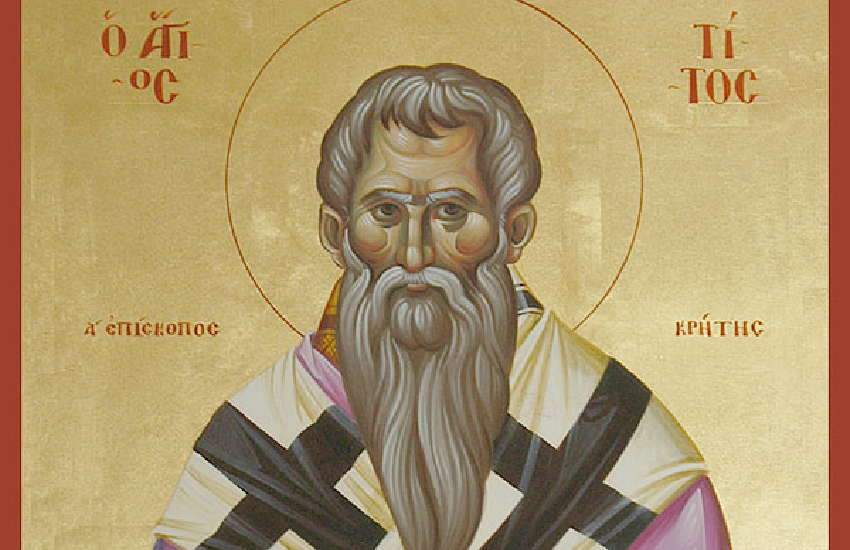 St. Titus, the first bishop of the island of Crete, died about the end of the First Century of our era. He received from St. Paul and Epistle, which with the two Epistles to St. Timothy, forms the group known in the New Testament as the Pastoral Epistles.

ST. DOROTHY was a young virgin, celebrated at Cæsarea, where she lived, for her angelic virtue. Her parents seem to have been martyred before her in the Diocletian persecution, and when the Governor Sapricius came to Cæsarea he called her before him, and sent this child of martyrs to the home where they were waiting for her.
She was stretched upon the rack, and offered marriage if she would consent to sacrifice, or death if she refused. But she replied that “Christ was her only Spouse, and death her desire.” She was then placed in charge of two women who had fallen away from the faith, in the hope that they might pervert her; but the fire of her own heart rekindled the flame in theirs, and led them back to Christ. When she was set once more on the rack, Sapricius himself was amazed at the heavenly look she wore, and asked her the cause of her joy. “Because,” she said, “I have brought back two souls to Christ, and because I shall soon be in heaven rejoicing with the angels.” Her joy grew as she was buffeted in the face and her sides burned with plates of red-hot iron. “Blessed be Thou,” she cried, when she was sentenced to be beheaded,—”blessed be Thou, O Thou Lover of souls! Who dost call me to Paradise, and invitest me to Thy nuptial chamber.”
St. Dorothy suffered in the dead of winter, and it is said that on the road to her passion a lawyer called Theophilus, who had been used to calumniate and persecute the Christians, asked her, in mockery, to send him “apples or roses from the garden of her Spouse.” The Saint promised to grant his request, and, just before she died, a little child stood by her side bearing three apples and three roses. She bade him take them to Theophilus and tell him this was the present which he sought from the garden of her Spouse. St. Dorothy had gone to heaven, and Theophilus was still making merry over his challenge to the Saint when the child entered his room. He saw that the child was an angel in disguise, and the fruit and flowers of no earthly growth. He was converted to the faith, and then shared in the martyrdom of St. Dorothy.

Reflection. —Do you wish to be safe in the pleasures and happy in the troubles of the world? Pray for heavenly desires, and say, with St. Philip, “Paradise, Paradise!” you!
Lives Of The Saints By Alban Butler, Benziger Bros. Edition www.globalgrey.co.uk

We are to celebrate today, the Feast of a holy Bishop of the Apostolic Age — a Disciple of
the Apostle St. Paul. Little is known of his life; but, by addressing to him one of his inspired
Epistles, the Apostle of the Gentiles has immortalized his memory. Wheresoever the Faith of
Christ has been or shall be preached, Titus’ name has been venerated by the Faithful; and
as long as the world lasts, the holy Church will read to her children this Epistle, which was
written, indeed, to a simple Bishop of the Isle of Crete, but was dictated by the Holy Ghost,
and therefore destined to be a part of those Sacred Scriptures, which contain the word of
God. The counsels and directions given in this admirable Letter, were the rule of the holy
Bishop, for whom St. Paul entertained a very strong affection. St. Titus had the honour of
establishing the Christian Religion in that famous Island, which was one of the strong-holds
of Paganism. He survived his master, who was put to death by Nero. Like St . John, he
sweetly slept in Christ at a very advanced age, respected and loved by the Church he had
founded. As we have already observed, his life left but few traces behind it; but these few
are sufficient to prove him to have been one of those wonderful men, whom God chose as
the directors of his infant Church.

Titus, Bishop of Crete, was initiated into the christian faith by Paul the Apostle; and being
prepared by the sacraments, he shed so bright a light of sanctity on the infant Church, that
he merited to be chosen as one of the Disciples of the Doctor of the Gentiles. Being called to
bear the burden of preaching the Gospel, so ardent and persevering was he in the discharge
of that duty, that he endeared himself to St. Paul so much, as to make the Apostle say in
one of his Epistles, that being come to Troas, to preach the faith in that city, he found no
rest for his heart, because he found not there his brother Titus. And having, a short time
after this, gone to Macedonia, he thus expresses his affection for his disciple in these terms:
But God who comforteth the humble, comforted us by the coming of Titus.

Being sent to Corinth by the Apostle, he acquitted himself in this mission (which mainly
consisted in collecting the alms given by the piety of the faithful towards alleviating the
distress of the Hebrew Church) with so much prudence and patience, that he not only
confirmed the Corinthians in the faith of Christ, but made them so desirous of a visit from
Paul, who had been their first teacher in the faith, that they shed tears of longing affection.
After having undertaken several journeys, both by sea and land, in order to sow the seed of
the divine word among people of various tongues and countries; and after having
supported, with great firmness of soul, countless anxieties and fatigues, in order to plant
the standard of the Cross;–he landed at the island of Crete in company with his master St.
Paul. The Apostle made him Bishop of the Church which he had founded in that island: and
it is not to be doubted but that Titus so discharged his duty as that he became a model to
the Faithful, according to the advice given to him by his master, in good works, in doctrine,
in integrity, in gravity.

Thus did he become a shining light, pouring forth the rays of Christian faith on them that
were sitting in the darkness of idolatry and lies, as in the shadow of death. Tradition tells us
that he passed into Dalmatia, where he laboured with extraordinary zeal to enlist that
people under the banner of the Cross. At length, full of days and merit, in the ninety-fourth
year of his age, he slept in the Lord the death of the just, and was buried in the Church in
which the Apostle had appointed him Minister of the word. St. John Chrysostom and St.
Jerome pass great eulogium upon this holy Bishop, and his name is inscribed in the Roman
Martyrology on the day above mentioned; but in establishing his Feast to be celebrated,
with an Office and Mass, throughout the catholic world, by the clergy secular and regular,
the Sovereign Pontiff Pius the Ninth ordered it to be kept on the first vacant day following
the anniversary of the Saint&#39;s death.
Credit to catholicharboroffaithandmorals.com

Connection for our time: Saint Titus was a force of conversion in pagan lands, an integral
part of spreading the faith to new territory. We too find ourselves in a land that has been

largely paganized today, and we might call to mind the fervor and conviction a man like
Titus would have in his mission. Let us pray for his intercession as we seek to spread again
the Gospel of Christ in a land that has descended into a new form of paganism.