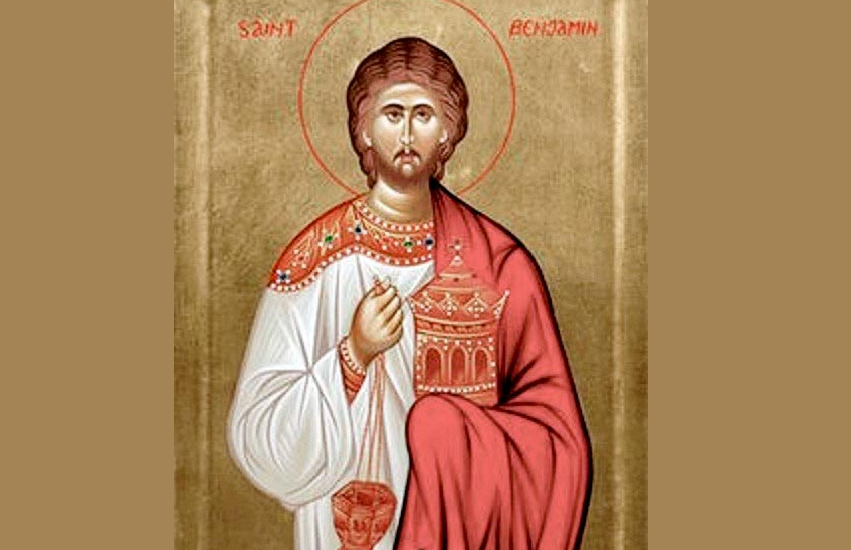 ISDEGERDES, Son of Sapor III., put a stop to the cruel persecutions against the Christians in Persia, which had been begun by Sapor II., and the Church had enjoyed twelve years’ peace in that kingdom, when in 420 it was disturbed by the indiscreet zeal of Abdas, a Christian bishop, who burned down the Pyræum, or Temple of Fire, the great divinity of the Persians. King Isdegerdes thereupon demolished all the Christian churches in Persia, put to death Abdas, and raised a general persecution against the Church, which continued forty years with great fury. Isdegerdes died the year following, in 421. But his son and successor, Varanes, carried on the persecution with greater inhumanity. The very recital of the cruelties he exercised on the Christian strikes us with horror. Among the glorious champions of Christ was St. Benjamin, a deacon. The tyrant caused him to be beaten and imprisoned. He had lain a year in the dungeon, when an ambassador from the emperor obtained his release on condition that he should never speak to any of the courtiers about religion. The ambassador passed his word in his behalf that he would not; but Benjamin, who was a minister of the Gospel, declared that he should miss no opportunity of announcing Christ. The king, being informed that he still preached the Faith in his kingdom, ordered him to be apprehended, caused reeds to be run in between the nails and the flesh, both of his hands and feet, and to be thrust into other most tender parts, and drawn out again, and this to be frequently repeated with violence. Lastly, a knotty stake was thrust into his bowels, to rend and tear them, in which torment he expired in the year 424.

Reflection. —We entreat you, O most holy martyrs, who cheerfully suffered most cruel torments for God our Saviour and His love, on which account you are now most intimately and familiarly united to Him, that you pray to the Lord for us miserable sinners, covered with filth, that He infuse into us the grace of Christ, that it may enlighten our souls that we may love Him.