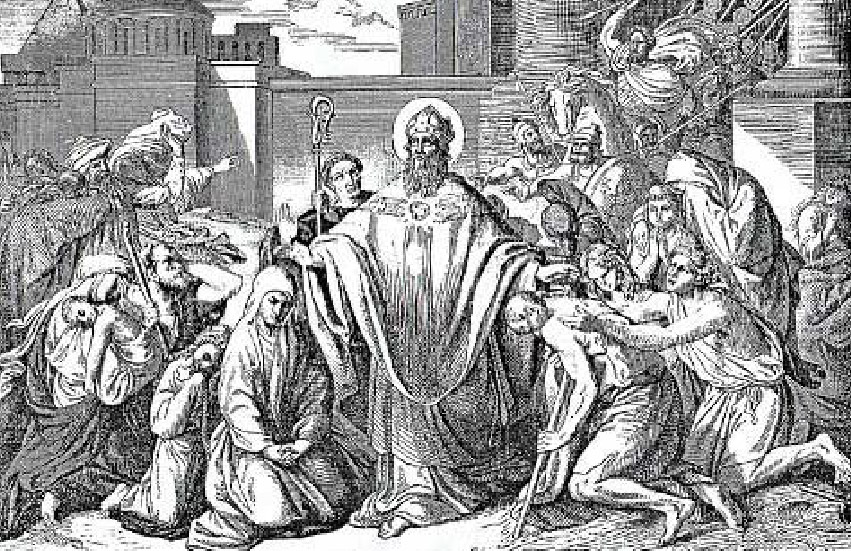 ATHANASIUS was born in Egypt towards the end of the third century, and was from his youth pious, learned, and deeply versed in the sacred writings, as befitted one whom God had chosen to be the champion and defender of His Church against the Arian heresy. Though only a deacon he was chosen by his bishop to go with him to the Council of Nicæa, in 325, and attracted the attention of all by the learning and ability with which he defended the faith. A few months later, he became Patriarch of Alexandria, and for forty-six years he bore, often well-nigh alone, the whole brunt of the Arian assault. On the refusal of the Saint to restore Arius to Catholic communion, the emperor ordered the Patriarch of Constantinople to do so. The wretched heresiarch took an oath that he had always believed as the Church believes; and the patriarch, after vainly using every effort to move the emperor, had recourse to fasting and prayer, that God Would avert from the Church the frightful sacrilege. The day came for the solemn entrance of Arius into the great church of Sancta Sophia. The heresiarch and his party set out glad and in triumph. But before he reached the church, death smote him swiftly and awfully, and the dreaded sacrilege was averted. St. Athanasius stood unmoved against four Roman emperors; was banished five times; was the butt of every insult, calumny, and wrong the Arians could devise, and lived in constant peril of death. Though firm as adamant in defence of the Faith, he was meek and humble, pleasant and winning in converse, beloved by his flock, unwearied in labors, in prayer, in mortifications, and in zeal for souls. In the year 373 his stormy life closed in peace, rather that his people would have it so than that his enemies were weary of persecuting him. He left to the Church the whole and ancient Faith, defended and explained in writings rich in thought and learning, clear, keen, and stately in expression. He is honored as one of the greatest of the Doctors of the Church.

Reflection. —The Catholic Faith, says St. Augustine, is more precious far than all the riches and treasures of earth; more glorious and greater than all its honors, all its possessions. This it is which saves sinners, gives light to the blind, restores penitents, perfects the just, and is the crown of martyrs.