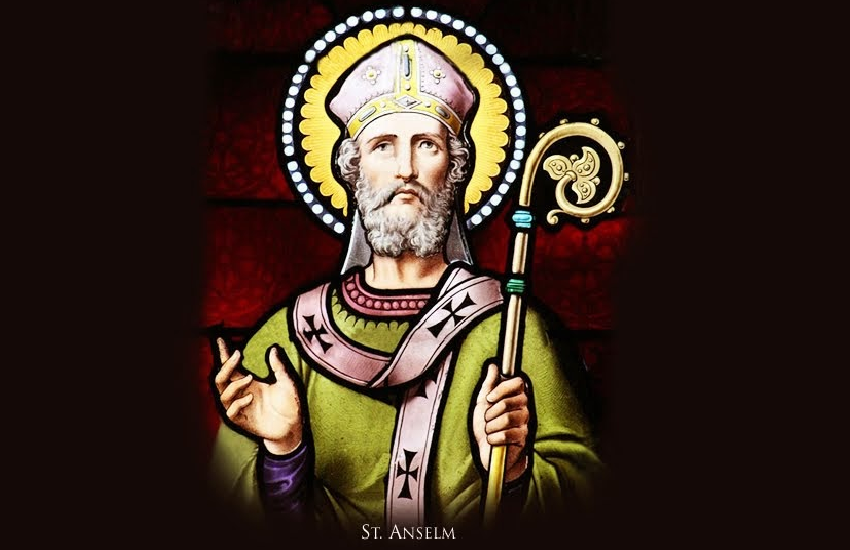 ANSELM was a native of Piedmont. When a boy of fifteen, being forbidden to enter religion, he for a while lost his fervor, left his home, and went to various schools in France. At length his vocation revived, and he became a monk at Bec in Normandy. The fame of his sanctity in this cloister led William Rufus, when dangerously ill, to take him for his confessor, and to name him to the vacant see of Canterbury. Now began the strife of Anselm’s life. With new health the king relapsed into his former sins, plundered the Church lands, scorned the archbishop’s rebukes, and forbade him to go to Rome for the pallium. Anselm went, and returned only to enter into a more bitter strife with William’s successor, Henry I. This sovereign claimed the right of investing prelates with the ring and crozier, symbols of the spiritual jurisdiction which belongs to the Church alone. The worldly prelates did not scruple to call St. Anselm a traitor for his defence of the Pope’s supremacy; on which the Saint rose, and with calm dignity exclaimed, “If any man pretends that I violate my faith to my king because I will not reject the authority of the Holy See of Rome, let him stand forth, and in the name of God I will answer him as I ought” No one took up the challenge; and to the disappointment of the king, the barons sided with the Saint, for they respected his courage, and saw that his cause was their own. Sooner than yield, the archbishop went again into exile, till at last the king was obliged to submit to the feeble but inflexible old man. In the midst of his harassing cares, St. Anselm found time for writings which have made him celebrated as the father of scholastic theology; while in metaphysics and in science he had few equals. He is yet more famous for his devotion to our blessed Lady, whose Feast of the Immaculate Conception he was the first to establish in the West. He died in 1109.

Reflection. —Whoever, like St. Anselm, contends for the Church’s rights, is fighting on the side of God against the tyranny of Satan.