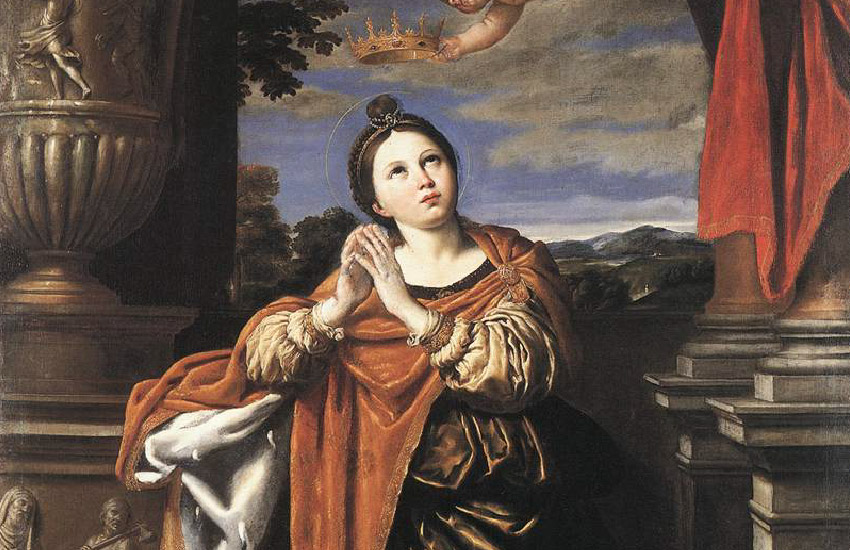 AGNES was but twelve years old when she was led to the altar of Minerva at Rome and commanded to obey the persecuting laws of Diocletian by offering incense. In the midst of the idolatrous rites she raised her hands to Christ, her Spouse, and made the sign of the life-giving cross. She did not shrink when she was bound hand and foot, though the gyves slipped from her young hands, and the heathens who stood around were moved to tears. The bonds were not needed for her, and she hastened gladly to the place of her torture. Next, when the judge saw that pain had no terrors for her, he inflicted an insult worse than death: her clothes were stripped off, and she had to stand in the street before a pagan crowd; yet even this did not daunt her. “Christ,” she said, “will guard His own.” So it was. Christ showed, by a miracle, the value which He sets upon the custody of the eyes. Whilst the crowd turned away their eyes from the spouse of Christ, as she stood exposed to view in the street, there was one young man who dared to gaze at the innocent child with immodest eyes. A flash of light struck him blind, and his companions bore him away half dead with pain and terror.

Lastly, her fidelity to Christ was proved by flattery and offers of marriage. But she answered, “Christ is my Spouse: He chose me first, and His I will be.” At length the sentence of death was passed. For a moment she stood erect in prayer, and then bowed her neck to the sword. At one stroke her head was severed from her body, and the angels bore her pure soul to Paradise.

Reflection. —Her innocence endeared St. Agnes to Christ, as it has endeared her to His Church ever since. Even as penitents we may imitate this innocence of hers in our own degree. Let us strictly guard our eyes, and Christ, when He sees that we keep our hearts pure for love of Him, will renew our youth and give us back the years which the canker-worm has wasted.

St. Jerome says, that the tongues and pens of all nations are employed in the praises of this saint, who overcame both the cruelty of the tyrant and the tenderness of her age, and crowned the glory of chastity with that of martyrdom. St. Austin observes, that her name signifies chaste in Greek, and lamb in Latin. She has been always looked upon in the church as a special patroness of purity, with the immaculate Mother of God and St. Thecla. Rome was the theatre of the triumph of St. Agnes; and Prudentius says, that her tomb was shown within sight of that city.

She suffered not long after the beginning of the persecution of Dioclesian, whose bloody edicts appeared in March in the year of our Lord 303. We learn from St. Ambrose and St. Austin, that she was only thirteen years of age at the time of her glorious death. Her riches and beauty excited the young noblemen of the first families of Rome, to vie with one another in their addresses, who should gain her in marriage. Agnes answered them all, that she had consecrated her virginity to a heavenly spouse, who could not be beheld by mortal eyes. Her suitors finding her resolution impregnable to all their arts and importunities, accused her to the governor as a Christian; not doubting but threats and torments would overcome her tender mind, on which allurements could make no impression. The judge at first employed the mildest expressions and most inviting promises; to which Agnes paid no regard, repeating always, that she could have no other spouse than Jesus Christ. He then made use of threats, but found her soul endowed with a masculine courage, and even desirous of racks and death.

At last, terrible fires were made, and iron hooks, racks, and other instruments of torture displayed before her, with threats of immediate execution. The young virgin surveyed them all with an undaunted eye; and with a cheerful countenance beheld the fierce and cruel executioners surrounding her, and ready to dispatch her at the word of command. She was so far from betraying the least symptom of fear, that she even expressed her joy at the sight, and offered herself to the rack. She was then dragged before the idols, and commanded to offer incense: “but could by no means be compelled to move her hand, except to make the sign of the cross,” says St. Ambrose. The governor seeing his measures ineffectual, said he would send her to a house of prostitution, where what she prized so highly should be exposed to the insults of the debauchees. Agnes answered that Jesus Christ was too jealous of the purity of his spouses, to suffer it to be violated in such a manner; for he was their defender and protector. “You may,” said she, “stain your sword with my blood, but will never be able to profane my body, consecrated to Christ.” The governor was so incensed at this, that he ordered her to be immediately led to the public brothel, with liberty to all persons to abuse her person at pleasure.

Many young profligates ran thither, full of the wicked desire of gratifying their lust; but were seized with such awe at the sight of the saint, that they durst not approach her; one only excepted, who, attempting to be rude to her, was that very instant, by a flash, as it were, of lightning from heaven, struck blind, and fell trembling to the ground. His companions, terrified, took him up, and carried him to Agnes, who was at a distance, singing hymns of praise to Christ, her protector. The virgin by prayer restored him to his sight and health. The chief prosecutor of the saint, who at first sought to gratify his lust and avarice, now labored to satiate his revenge, by incensing the judge against her; his passionate fondness being changed into anger and rage. The governor wanted not others to spur him on; for he was highly exasperated to see himself baffled, and set at defiance by one of her tender age and sex. Therefore, resolved upon her death, he condemned her to be beheaded.

Agnes, transported with joy on hearing this sentence,and still more at the sight of the executioner, “went to the place of execution more cheerfully,” says St. Ambrose, “than others go to their wedding.” The executioner had secret instructions to use all means to induce her to a compliance: but Agnes always answered she could never offer so great an injury to her heavenly spouse; and having made a short prayer, bowed down her neck to adore God, and receive the stroke of death. The spectators wept to see so beautiful and tender a virgin loaded with fetters, and to behold her fearless under the very sword of the executioner, who with a trembling hand cut off her head at one stroke. Her body was buried at a small distance from Rome, near the Nomentan road. A church was built on the spot in the time of Constantine the Great, and was repaired by pope Honorius in the seventh century.

The feast of St. Agnes is mentioned in all Martyrologies, both of the East and West, though on different days. It was formerly a holyday for the women in England, as appears from the council of Worcester, held in the year 1240. St. Ambrose, St. Austin, and other fathers have wrote her panegyric. St. Martin of Tours was singularly devout to her. Thomas à Kempis honored her as his special patroness, as his works declare in many places. He relates many miracles wrought, and graces received through her intercession.

Marriage is a holy state, instituted by God, and in the order of providence and nature the general or most ordinary state of those who live in the world. Those, therefore, who upon motives of virtue, and in a Christian and holy manner engage in this state, do well. Those, nevertheless, who for the sake of practising more perfect virtue, by a divine call, prefer a state of perpetual virginity, embrace that which is more perfect and more excellent. Dr. Wells, a learned Protestant, confesses that Christ declares voluntary chastity, for the kingdom of heaven’s sake, to be an excellency, and an excellent state of life. This is also the manifest inspired doctrine of St. Paul, and in the revelations of St. John, spotless virgins are called, in a particular manner, the companions of the Lamb, and are said to enjoy the singular privilege of following him wherever he goes. The tradition of the church has always been unanimous in this point; and among the Romans, Greeks Syrians, and Barbarians, many holy virgins joyfully preferred torments and death to the violation of their integrity, which they bound themselves by vow to preserve without defilement, in mind or body. The fathers, from the very disciples of the apostles, are all profuse in extolling the excellency of holy virginity, as a special fruit of the incarnation of Christ, his divine institution, and a virtue which has particular charms in the eyes of God, who delights in chaste minds, and chooses to dwell singularly in them. They often repeat that purity raises men, even in this mortal life, to the dignity of angels; purifies the soul, fits it for a more perfect love of God and a closer application to heavenly things, and disengages the mind and heart from worldly thoughts and affections. It produces in the soul the clearest resemblance to God. Chastity is threefold; that of virgins, that of widows, and that of married persons; in each state it will receive its crown, as St. Ambrose observes, but in the first is most perfect, so that St. Austin calls its fruit an hundred fold, and that of marriage sixty fold; but the more excellent this virtue is, and the higher its glory and reward, the more heroic and the more difficult is its victory; nor is it perfect unless it be embellished with all other virtues in an heroic degree, especially divine charity and the most profound humility.

Connection for our times: Impurity is perhaps the most dominant vice in our age, and the onslaught of this vice seems to grow with each passing day. Let us take inspiration for Saint Agnes who so valiantly fought against the threats to her purity, at such a tender age. May it be a reminder to protect our children from the threats of impure vice that infest every corner of society.