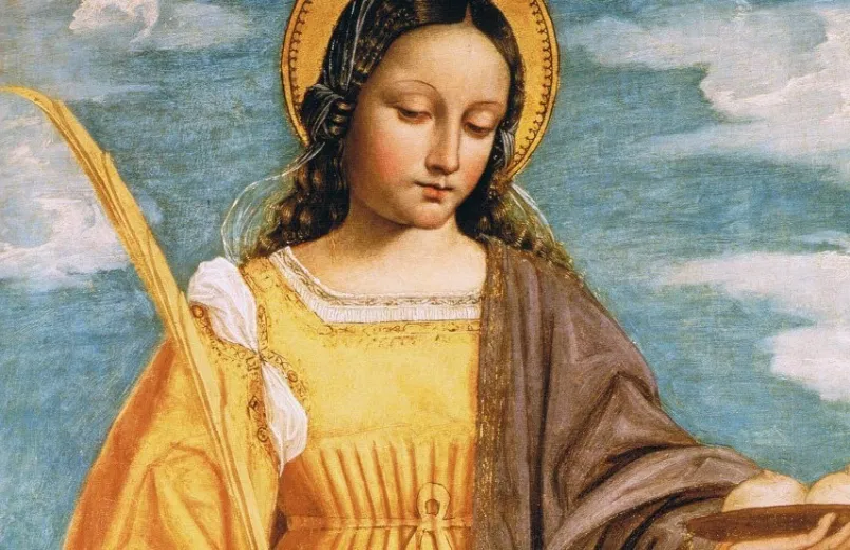 ST. AGATHA was born in Sicily, of rich and noble parents—a child of benediction from the first, for she was promised to her parents before her birth, and consecrated from her earliest infancy to God. In the midst of dangers and temptations she served Christ in purity of body and soul, and she died for the love of chastity. Quintanus, who governed Sicily under the Emperor Decius, had heard the rumor of her beauty and wealth, and he made the laws against the Christians a pretext for summoning her from Palermo to Catania, where he was at the time. “O Jesus Christ!” she cried, as she set out on this dreaded journey, “all that I am is Thine; preserve me against the tyrant.”
And Our Lord did indeed preserve one who had given herself so utterly to Him. He kept her pure and undefiled while she was imprisoned for a whole month under charge of an evil woman. He gave her strength to reply to the offer of her life and safety, if she would but consent to sin, “Christ alone is my life and my salvation.” When Quintanus turned from passion to cruelty, and cut off her breasts, Our Lord sent the Prince of His apostles to heal her. And when, after she had been rolled naked upon potsherds, she asked that her torments might be ended, her Spouse heard her prayer and took her to Himself.
St. Agatha gave herself without reserve to Jesus Christ; she followed Him in virginal purity, and then looked to Him for protection. And down to this day Christ has shown His tender regard for the very body of St. Agatha. Again and again, during the eruptions of Mount Etna, the people of Catania have exposed her veil for public veneration, and found safety by this means; and in modern times, on opening the tomb in which her body lies waiting for the resurrection, they beheld the skin still entire, and felt the sweet fragrance which issued from this temple of the Holy Ghost.

Reflection. —Purity is a gift of God: we can gain it and preserve it only by care and diligence in avoiding all that may prove an incentive to sin.
Lives Of The Saints By Alban Butler, Benziger Bros. Edition www.globalgrey.co.uk

This holy virgin and martyr, St Agatha, is held in great veneration by the Greek as well as
the Latin Church; and although her original Acts have not been preserved, many well-
authenticated facts concerning her martyrdom are found in the Bollandists, Surius, and
others.

St Agatha was a native of Sicily, and descended of a noble and opulent family. These
circumstances, added to her extraordinary beauty, inflamed Quintianus, a man of consular
dignity, with such love of her, that he resolved to compel her to become his wife. The edicts
of the emperor Decius against the Christians having been published, he ordered Agatha to
be arrested as a Christian, and conducted to Catania, where he then resided.

The holy virgin, St Agatha, having heard the proclamation against the Christians, retired to
a solitary place in order to avoid the snares of Quintinus, concerning which she had received
some intimation.

The emissaries of the governor, however, discovered her place of concealment, and after
having been arrested, she prayed after the following manner: “O Jesus Christ, Lord of all
things, Thou seest my heart, and knowest my desire, which is to possess only Thee, since I
have consecrated myself entirely to Thee. Preserve me, dear Lord, from this tyrant, and

enable me to overcome the devil, who layeth snares for my soul.

When St Agatha appeared before Quintianus, in order the more easily to overcome her
modesty, he gave her up to Aphrodisia, an abominable woman, who, together with her
daughters, publicly professed immodesty. In her infamous house the saint suffered greater
torture than the darkest and most fetid dungeon could afford. All the arts of Aphrodisia and
her partners in crime were unceasingly applied, in order to induce the saint to comply with
the wishes of Quintianus; but Agatha, who from her infancy had been consecrated to Jesus
Christ, was enabled by his divine grace to overcome all their attempts.

Quintianus, having been informed that the efforts of Aphrodisia for an entire month had
been employed in vain, commanded that the saint should be again brought before him. He
upbraided her, that, being a free woman and noble, she had allowed herself to be seduced
into the humble servitude of the Christians.

The holy virgin courageously confessed that she was a Christian, and that she knew of no
nobility more illustrious, nor liberty more real, than to be a servant of Jesus Christ.

Quintianus, irritated at her rebuke, commanded her to be buffeted and led to prison. The
following day she was again summoned, and asked whether she had resolved to save her
life.

St Agatha replied: “God is my life and my salvation.” The governor then put her to the
torture, which was executed with barbarous cruelty.

Quintianus then remanded the saint to prison, commanding that her wounds should be left
undressed, in order that she might expire under the torture.

But at midnight St. Peter appeared to her in a vision, perfectly cured her wounds, and freed
her from all pain; during the entire of that night there appeared in the interior of the prison
so resplendent a light that the guards fled in terror, leaving the door of her dungeon open,
so that she could have escaped, as the other prisoners advised her, but that she was
unwilling, as she said, to lose by flight the crown which was being prepared for her in
heaven.

Quintianus, nothing moved by her miraculous cure, but on the contrary more irritated, after
four days devised new torments for the saint.

He commanded that she should be rolled over broken tiles, mixed with burning coals; but
she endured all with constancy; and while the tyrant was planning fresh torments, the saint,
perceiving that her life was drawing to a close, made the following prayer:

“O Lord, my Creator, who hast preserved me from infancy, hast given me strength to
overcome these torments, and hast taken from me the love of the world, receive now my
soul. It is time that I should at last pass from this miserable life to the fruition of Thy glory.”

Just as she had finished these words, she tranquilly expired, and went to be united to God,
to praise him and love him forever. This happened in 251. Her name is mentioned in the
Canon of the Mass.

Connection for our times: The story of Saint Agatha reminds us of the holy purity of the
Virgins of the Church. Even in the face of brutal torture, this great saint kept her faith and
purity. Our world is saturated with vice and impurity, and we are in need of that holy purity
that Saint Agatha demonstrated for us. Let us pray for her great intercession as we fight the
scourge of immodesty and impurity in our day.