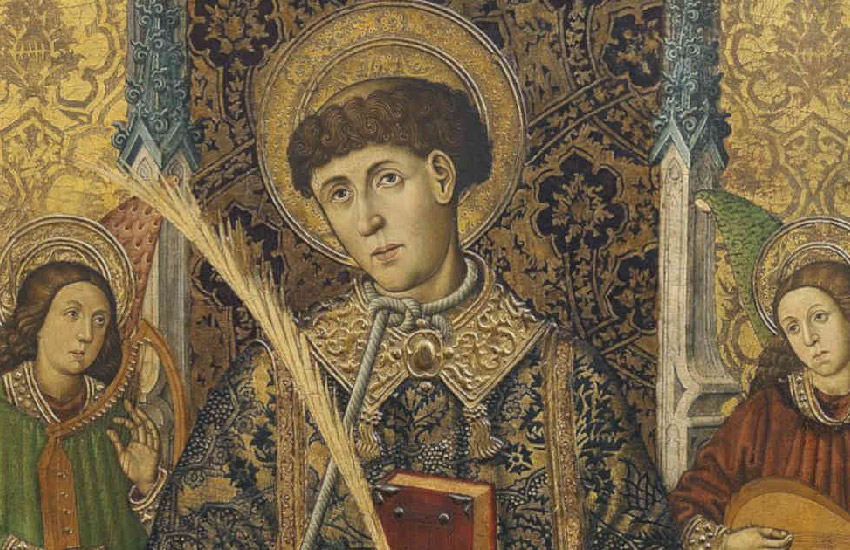 THE most glorious martyr St. Vincent was born, some say at Saragossa, others at Valentia, but most authors, and most probably, at Osca, now Huesca, in Granada. He was instructed in the sacred sciences and in Christian piety by Valerius, the bishop of that city, who ordained him his deacon, and appointed him, though very young, to preach and instruct the people. Dacian, a most bloody persecutor, was then governor of Spain. The emperors Dioclesian and Maximian published their second and third bloody edicts against the Christian clergy in the year 303, which in the following year were put in force against the laity. It seems to have been before these last that Dacian put to death eighteen martyrs at Saragossa, who are mentioned by Prudentius, and in the Roman Martyrology, January the 16th, and that he apprehended Valerius and Vincent. They spilt some of their blood at Saragossa, but were then conducted to Valentia, where the governor let them lie long in prison, suffering extreme famine and other miseries. The proconsul hoped that this lingering torture would shake their constancy; but when they were brought out before him, he was surprised to see them still intrepid in mind, and vigorous in body, and reprimanded his officers, as if they had not treated the prisoners according to his orders. Then, turning to the champions of Christ, he employed alternately threats and promises to induce them to sacrifice. Valerius, who had an impediment in his speech, making no answer, Vincent said to him “Father, if you order me, I will speak.” “Son,” said Valerius, “as I committed to you the dispensation of the word of God, so I now charge you to answer in vindication of the faith which we defend.” The holy deacon then acquainted the judge that they were ready to suffer every thing for the true God, and little regarded either his threats or promises in such a cause. Dacian contented himself with banishing Valerius. As for St. Vincent, he was determined to assail his resolution by every torture his cruel temper could suggest. St. Austin assures us, that he suffered torments far beyond what any man could possibly have endured, unless supported by a supernatural strength; and that he preserved such a peace and tranquillity in his words, countenance, and gestures in the midst of them, as astonished his very persecutors, and visibly appeared as something divine; while the rage and destruction of Dacian’s soul was as visible in the violent agitations of his body, by his eyes sparkling with fury, and his faltering voice.

The martyr was first stretched on the rack by his hands and feet, drawn by cords and pulleys, till his joints were almost torn asunder: while he hung in this posture, his flesh was unmercifully torn off with iron hooks. Vincent, smiling, called the executioners weak and faint-hearted. Dacian thought they spared him, and caused them to be beaten, which afforded the champion an interval of rest: but they soon returned to him, resolved fully to satisfy the cruelty of their master, who excited them all the while to exert their utmost strength. They twice stayed their hands to take breath, and let his wounds grow cold; then began with fresh vigor to rend and tear his body, which they did in all its limbs and parts with such cruelty, that his bones and bowels were in most places exposed bare to sight. The more his body was mangled, the more did the divine presence cherish and comfort his soul, and spread a greater joy on his countenance. The judge, seeing the streams of blood which flowed from all the parts of his body, and the frightful condition to which it was reduced, was obliged to confess, with astonishment, that the courage of the young nobleman had vanquished him; and his rage seemed somewhat abated. Hereupon he ordered a cessation of his torments, begging of the saint for his own sake, that if he could not be prevailed upon to offer sacrifice to the gods, he would at least give up the sacred books to be burnt, according to the order of the late edicts. The martyr answered, that he feared his torments less than that false compassion which he testified. Dacian, more incensed than ever, condemned him to the most cruel of tortures, that of fire upon a kind of gridiron, called by the acts the legal torture. The saint walked with joy to the frightful engine, so as almost to get the start of his executioners, such was his desire to suffer. He mounted cheerfully the iron bed, in which the bars were framed like scythes, full of sharp spikes made red-hot by the fire underneath. On this dreadful gridiron, the martyr was stretched out at length, and bound fast down. He was not only scourged thereon, but, while one part of his body was broiling next the fire, the other was tortured by the application of red-hot plates of iron. His wounds were rubbed with salt, which the activity of the fire forced the deeper into his flesh and bowels. All the parts of his body were tormented in this manner, one after the other, and each several times over. The melted fat dropping from the flesh, nourished and increased the flames; which, instead of tormenting, seemed, as St. Austin says, to give the martyr new vigor and courage; for the more he suffered, the greater seemed to be the inward joy and consolation of his soul. The rage and confusion of the tyrant exceeded all bounds: he appeared not able to contain himself, and was continually inquiring what Vincent did and what he said; but was always answered, that he suffered with joy in his countenance, and seemed every moment to acquire new strength and resolution. {195} He lay unmoved, his eyes turned towards heaven, his mind calm, and his heart fixed on God in continual prayer. At last, by the command of the proconsul, he was thrown into a dungeon and his wounded body laid on the floor strewed with broken potsherds, which opened afresh his ghastly wounds, and cut his bare flesh. His legs were set in wooden stocks, stretched very wide, and strict orders were given that he should be left without provisions, and that no one should be admitted to see or speak to him. But God sent his angels to comfort him, with whom he sung the praises of his protector. The jailer observing through the chinks the prison filled with light, and the saint walking and praising God, was converted upon the spot to the Christian faith, and afterwards baptized. At this news Dacian chafed, and even wept through rage, but ordered some repose should be allowed the prisoner. The faithful were then permitted to see him, and coming in troops wiped and kissed his wounds, and dipped cloths in his blood, which they kept as an assured protection for themselves and their posterity. After this a soft bed was prepared for him, on which he was no sooner laid but he expired, the happy moment he had not ceased to pray for ever since his torments, and his first call to martyrdom.

Dacian commanded his body to be thrown on a marshy field among rushes; but a crow defended it from wild beasts and birds of prey. The acts in Ruinart and Bollandus, and the sermon attributed to St. Leo, add, that it was then tied to a great stone and cast into the sea in a sack, but miraculously carried to the shore, and revealed to two Christians. They laid it in a little chapel out of the walls of Valentia, where God honored these relics with many miracles, as the acts and St. Austin witness. Prudentius informs us that the iron on which he lay, and other instruments of his passion, were likewise preserved with veneration. Childebert, king of France, or rather of Paris, besieging Saragossa, wondered to see the inhabitants busied continually in making processions. Being informed they carried the stole of St. Vincent about the walls in devout prayer, and had been miraculously protected by that martyr’s intercession, he raised the siege upon condition that relic should be given him. This he with great solemnity brought to Paris, and enriched with it the magnificent church and abbey of St. Vincent, now called St. Germain-des-Prés, which he built in 559, and which his successor Clotaire caused to be dedicated. In the year 855, his sacred bones were discovered at Valentia, and conveyed into France, and deposited in the abbey of Castres, now an episcopal see in Languedoc, where they remain; but several portions have been given to the abbey of St. Germain-des-Prés at Paris, and other churches; and part was burnt at Castres by the Huguenots about the end of the sixteenth century.

God never more visibly manifested his power, nor gave stronger or more wonderful proofs of his tenderness and love for his church, than when he suffered it to groan under the most violent oppression and persecution; nor does his grace anywhere appear more triumphant than in the victories of his martyrs under the severest trials, and in the heroic virtues which they displayed amidst torments and insults. Under the slightest disappointments and afflictions we are apt to fall into discouragement, and to imagine, by our sloth and impatience, that our situation is of all others the most unhappy and intolerable. If nature feels, and we implore the divine mercy, and a deliverance, if this may be conducive to God’s honor, we must be careful never to sink under the trials, or consent to the least secret murmuring: we must bear them if not with joy, at least with perfect submission; and remain assured that God only seems to withdraw himself from us, that we may follow him more earnestly, and unite ourselves more closely to him.

Connection for our times: Our current day and the last few decades in the Church have been some of the most difficult in history. There is no need to go over the litany of problems that befall Catholics all over the world, either in their parish or in their society. It is during these times that God raises up the greatest of Saints, who as if defying all logic, convert nations and hardened hearts for the glory of God. Let us pray that this happens swiftly for us.