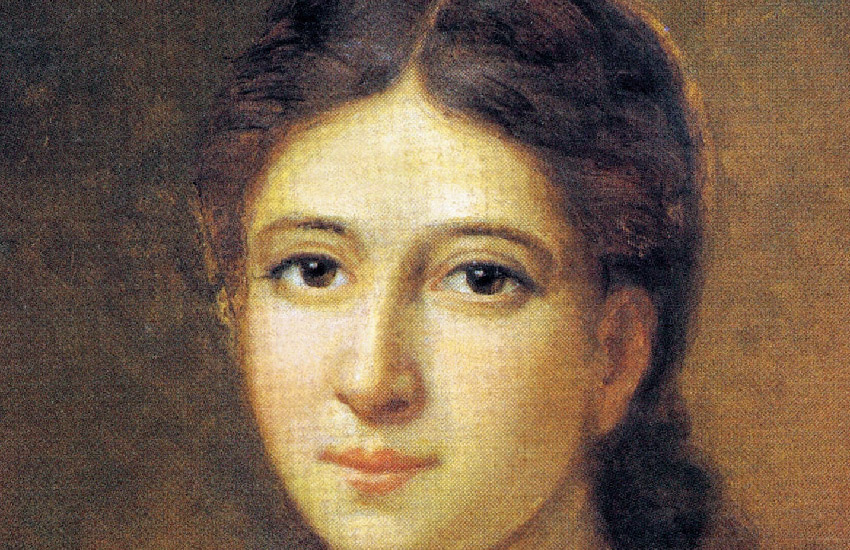 Pauline Jaricot is the foundress of the work of the Catholic Mission, a world-wide organization which funds and supports the work of Catholic missionaries. She was born in France in 1799. One of the most illustrious heroines which the Church has given to the world in modern times is without doubt the sweet French girl, Pauline Marie Jaricot. Many were the obstacles which this noble child had to confront to surrender herself to God, among which were the loss of her mother at an early age, while at the same time falling prey to a violent disorder which attacked both body and mind, and was excruciatingly painful. She suffered chest palpitations that were most violent, almost causing suffocation. During those dreadful years of torment there were some moments of relief at intervals, the most appreciable one at the end of a novena made to St. Philomena. Unable to pray at the a shrine of the Saint’s Pauline decide to go to Paray-le-Monial, to the Sanctuary of the Sacred Heart, which inspired her to try to journey to Rome to see the Holy Father to plead the cause of St. Philomena. The trek almost killed her because of her weakened condition brought on by her illness. When she and her party reached the summit of Mount Cenis in the Alps, a glorious view burst on their gaze: A beautiful child suddenly appeared—–no one knew whence he came—–and approaching the carriage where Pauline lay, smiled on her sweetly and presented her with a beautiful white rose, which exhaled a delightful fragrance. The guides had never seen the child, who disappeared as quickly as he came, nor could they form any idea of who he might be. they realized that the rose could not have bloomed so high in the mountains. No such flowers were known to that region of snow. Pauline prayed continually to the Virgin Mary and to St. Philomena. During the journey she suffered a serious relapse and once more all hope of saving her was lost. yet she rallied after a few days they began again toward the Eternal City. She did see the Pontiff who recognized her as a Saint, asking her to pray for him when she reached Heaven. Pauline replied: “Yes, Holy Father, I promise to do so, but if on my return from Mugnano [to pray to St. Philomena], I come back well and go on foot to the Vatican, will Your Holiness deign to proceed without delay with the final inquiry into the cause of St. Philomena?”

The Pontiff agreed, for that indeed would be a first class miracle, which was needed for approval of devotion to her as a Saint. It was now August and the heart was horrific, so the party went by night, arriving on the eve of St. Philomena’s Feast. The next day, the Feast itself, when Pauline received Holy Communion near the urn of the Saint, she experienced such frightful pains all over her body and her heart beat so violently that she was thought to be near death; she recovered enough to make a sign to be left near the urn, on which she fixed her eyes with an expression of deepest affection. Suddenly an abundant flood of tears filled her eyes and color came back to her cheeks, and a warm glow spread throughout her limbs. Her soul was inundated with such Heavenly joy that she though she was about to enter Heaven. But it was not death, it was life: St. Philomena, the beloved, had arranged for her cure by God and she was thus preserved for many long years of toil for Christ and His Blessed Mother. The Roman pontiff had Pauline remain in Rome for a year to fully explore the validity of the cure. At the close of that year, with the blessing of Christ’s Vicar, Pauline returned to France and the Pope named St. Philomena the Patroness of the Living Rosary.

Connection for our times: Saint Pauline’s devotion to Saint Philomena reminds us of the virginal purity spoken of multiple times by Our Lady. Let us pray for purity of heart in a world saturated in sins of the flesh.