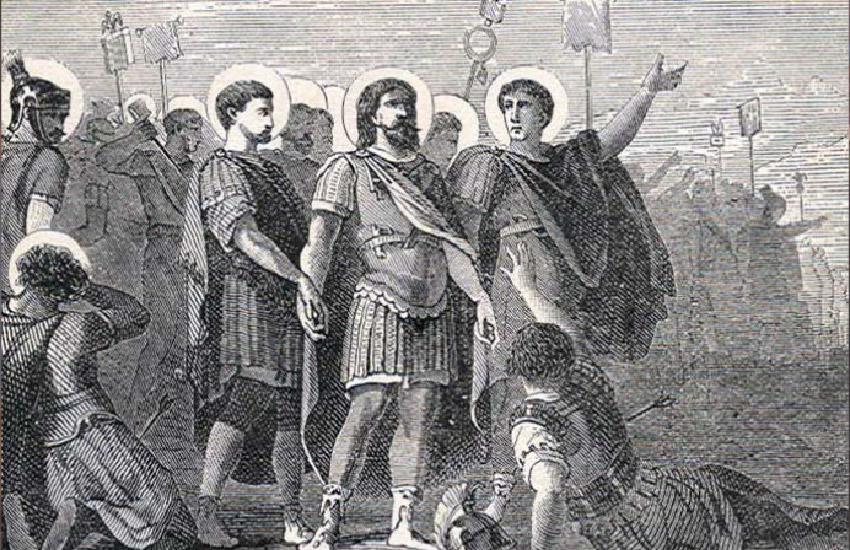 Marius, a nobleman of Persia, with his wife Martha, and two sons, Audifax and Abachum, being converted to the faith, distributed his fortune among the poor, as the primitive Christians did at Jerusalem, and came to Rome to visit the tombs of the apostles. The emperor Aurelian then persecuted the church, and by his order a great number of Christians were shut up in the amphitheatre, and shot to death with arrows, and their bodies burnt. Our saints gathered and buried their ashes with respect; for which they were apprehended, and after many torments under the governor Marcianus, Maris and his two sons were beheaded; and Martha drowned, thirteen miles from Rome, at a place now called Santa Ninfa. Their relics were found at Rome in 1590. They are mentioned with distinction in all the western Martyrologies from the sacramentary of St. Gregory. Their relics are kept principally at Rome; part in the church of St. Adrian, part in that of St. Charles, and in that of St. John of Calybite. Eginhart, sole-in-law and secretary of Charlemagne, deposited a portion of these relics, which had been sent him from Rome, in the abbey of Selghenstadt, of which he was the founder, in the diocese of
Mentz.

The martyrs and confessors triumphed over the devil by prayer; by this, poor and weak as they were, they were rendered invincible, by engaging Omnipotence itself to be their comfort, strength, and protection. If the art of praying well be the art of living well, according to the received maxim of the fathers and masters of a spiritual life, nothing is certainly of greater importance, than for us to learn this heavenly art of conversing with God in the manner we ought. We admire the wonderful effects which this exercise produced in the saints, who by it were disengaged from earthly ties and made spiritual and heavenly, perfect angels on earth; but we experience nothing of this in ourselves. Prayer was in them the channel of all graces, the means of attaining all virtues, and all the treasures of heaven. In us it is fruitless: the reason is plain; for the promises of Christ cannot fail: we ask, and receive not, because we ask amiss.

Connection for our times: At times it seems that there is nothing we can personally do to alter the reality of our surroundings, however troubling they may be. In our current time, this causes many great anxiety for a variety of reasons, stemming from government to illness, to global concerns. In the end, we can rely on prayer as the sure way to surrender to the will of God and persevere.