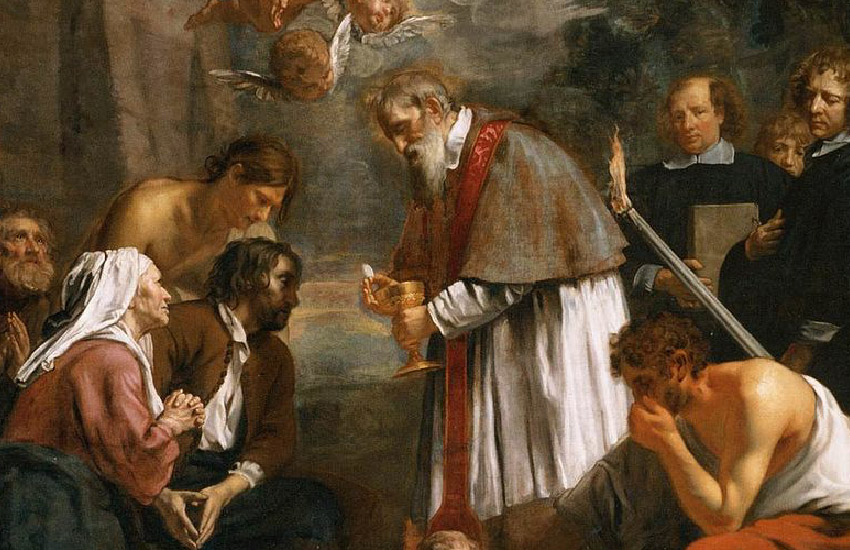 MACARIUS when a youth left his fruit-stall at Alexandria to join the great St. Antony. The patriarch, warned by a miracle of his disciple’s sanctity, named him the heir of his virtues. His life was one long conflict with self. “I am tormenting my tormentor,” replied he to one who met him bent double with a basket of sand in the heat of the day. “Whenever I am slothful and idle, I am pestered by desires for distant travel.” When he was quite worn out he returned to his cell. Since sleep at times overpowered him, he kept watch for twenty days and nights; being about to faint, he entered his cell and slept, but henceforth slept only at will. A gnat stung him; he killed it. In revenge for this softness he remained naked in a marsh till his body was covered with noxious bites and he was recognized only by his voice. Once when thirsty he received a present of grapes, but passed them untouched to a hermit who was toiling in the heat. This one gave them to a third, who handed them to a fourth; thus the grapes went the round of the desert and returned to Macarius, who thanked God for his brethren’s abstinence. Macarius saw demons assailing the hermits at prayer. They put their fingers into the mouths of some, and made them yawn. They closed the eyes of others, and walked upon them when asleep. They placed vain and sensual images before many of the brethren, and then mocked those who were captivated by them. None vanquished the devils effectually save those who by constant vigilance repelled them at once. Macarius visited one hermit daily for four months, but never could speak to him, as he was always in prayer; so he called him an ” angel on earth.” After being many years Superior, Macarius fled in disguise to St. Pachomius, to begin again as his novice; but St. Pachomius, instructed by a vision, bad, rim return to his brethren, who loved him as their father. In his old age, thinking nature tamed, he determined to spend five days alone in prayer. On the third day the cell seemed on fire, and Macarius came forth. God permitted this delusion, he said, lest he be ensnared by pride. At the age of seventy-three he was driven into exile and brutally outraged by the Arian heretics. He died A. D. 394.

Reflection: Prayer is the breath of the soul. But St. Macarius teaches us that mind and body must be brought to subjection before the soul is free to pray.

Connection for our times: Let us remember that the true battle is between the principalities and dominions (Eph. 6) and that we must stand in the Truth of our Faith against all heresy. During this global apostasy, let us pray fervently for the Consecration of Russia to the Immaculate Heart of Mary.