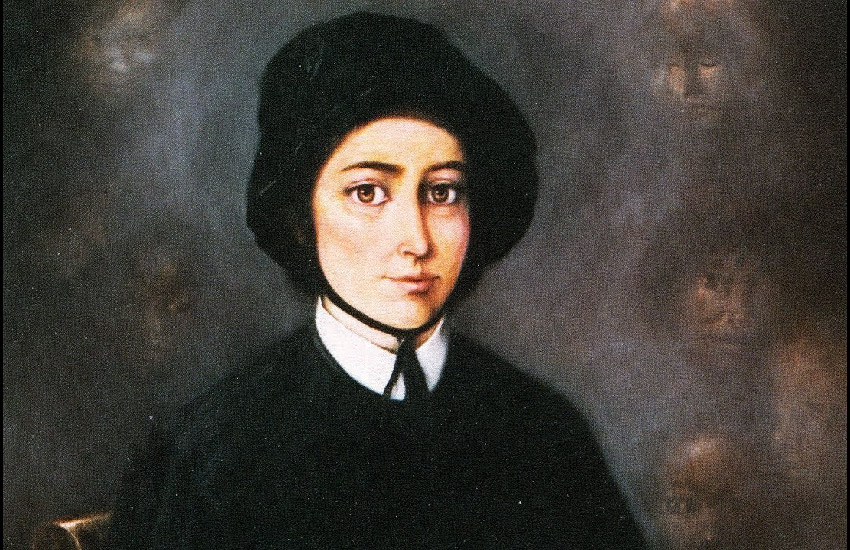 Elizabeth Ann Bayley Seton was the first native born American to be canonized by the Catholic Church.Born two years before the American Revolution, Elizabeth grew up in the upper class of New York society. She was a prolific reader, and read everything from the Bible to contemporary novels. In spite of her high society background, Elizabeth’s early life was quiet, simple, and often lonely. As she grew a little older, the Bible was to become her continual instruction, support and comfort -and she would continue to love the Scriptures for the rest of her life.

In 1794, Elizabeth married the wealthy young William Seton, with whom she was deeply in love. The first years of their marriage were happy and prosperous. Elizabeth wrote in her diary at first autumn, “My own home at twenty-the world-that and heaven too-quite impossible.”
This time of Elizabeth’s life was to be a brief moment of earthly happiness before the many deaths and partings she was to suffer. Within four years, William’s father died, leaving the young couple in charge of William’s seven half brothers and sisters, as well as the family’s importing business.

Events moved quickly from there with devastating effect. Both William’s business and health failed. He was finally forced to file a petition of bankruptcy and, in a final attempt to save William’s health, the Setons sailed for Italy, where William had business friends. Unfortunately, William died of tuberculosis while in Italy. Elizabeth’s one consolation was that he had recently awakened to the things of God. The many enforced separations from dear ones by death and distance served to draw Elizabeth’s heart to God and eternity. The accepting and embracing of God’s will – “The Will,” as she called it – would be a keynote in her spiritual life.

Having lost her mother at an early age, Elizabeth felt great comfort in the idea that the Blessed Virgin was truly her mother. She asked the Blessed Virgin to guide her to the True Faith and officially joined the Catholic Church in 1805. At the suggestion of the president of St. Mary’s College in Baltimore, Maryland, Elizabeth started a school in that city. The school had originally been secular but once news of her entrance to Catholicism spread, several girls were removed from her school. It was then Seton, and two other young women who helped her in her work, began plans for a Sisterhood. They established the first free Catholic school in America. When the young community adopted their rule, they made provisions for Elizabeth to continue raising her children.

On March 25, 1809, Elizabeth Seton pronounced her vows of poverty, chastity, and obedience, binding for one year. From that time she was called Mother Seton.

Although Mother Seton became afflicted with tuberculosis, she continued to guide her children. The Rule of the Sisterhood was formally ratified in 1812. It was based upon the Rule St. Vincent de Paul had written for his Daughters of Charity in France. By 1818, in addition to their first school, the sisters had established two orphanages and another school. Today, six groups of sisters can trace their origins to Mother Seton’s initial foundation.

Seton’s favorite prayer was the 23rd Psalm and she developed a deep devotion to the Eucharist, Sacred Scripture, and the Virgin Mary. For the last three years of her life, Elizabeth felt that God was getting ready to call her, and this gave her great joy. Mother Seton died in 1821 at the age of 46, only sixteen years after becoming a Catholic. She was beatified by Pope John XXIII on March 17, 1963 and was canonized on September 14, 1975 by Pope Paul VI.

A wonderful prayer in Saint Elizabeth’s name is:
Lord God, you blessed Elizabeth Seton with gifts of grace as wife and mother, educator and foundress, so that she might spend her life in service to your people. Through her example and prayers may we learn to express our love for you in love for our fellow men and women. We ask this through Christ our Lord Jesus Christ, your Son, who lives and reigns with you and the Holy Spirit, one God, for ever and ever. Amen.[1]

Connection for our times: Let us be inspired in a world that lacks vocations and the traditional family roles to embrace our state in life and the Will of God in all things.