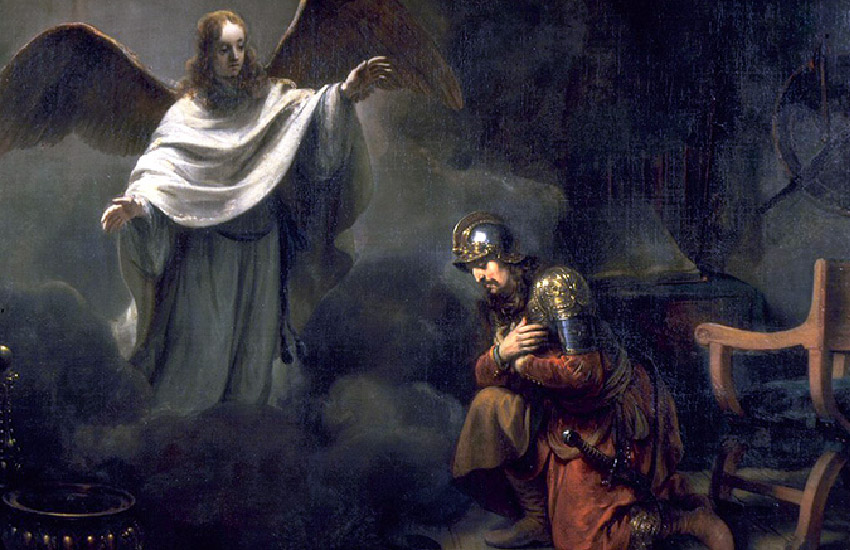 Soon after the sufferings of the Lord Jesus Christ on the Cross and His Ascension into Heaven, a centurion by the name of Cornelius settled at Caesarea in Palestine. He had lived previously in Thracian Italy. Although he was a pagan, he distinguished himself by deep piety and good deeds, as the holy Evangelist Luke says (Acts 10:1). The Lord did not disdain his virtuous life, and so led him to the knowledge of truth and to faith in Christ.

Once, Cornelius was praying in his home. An angel of God appeared to him and said that his prayer had been heard and accepted by God. The angel commanded him to send people to Joppa to find Simon, also called Peter. Cornelius immediately fulfilled the command.

While those people were on their way to Joppa, the Apostle Peter was at prayer, and he had a vision: three times a great sheet was lowered down to him, filled with all kinds of beasts and fowl. He heard a voice from Heaven commanding him to eat everything. When the apostle refused to eat food which Jewish Law regarded as unclean, the voice said: “What God hath cleansed, you must not call common” (Acts 10:15).

Through this vision the Lord commanded the Apostle Peter to preach the Word of God to the pagans. When the Apostle Peter arrived at the house of Cornelius in the company of those sent to meet him, he was received with great joy and respect by the host together with his kinsmen and comrades.

Cornelius fell down at the feet of the apostle and requested to be taught the way of salvation. Saint Peter talked about the earthly life of Jesus Christ, and spoke of the miracles and signs worked by the Savior, and of His teachings about the Kingdom of Heaven. Then Saint Peter told him of the Lord’s death on the Cross, His Resurrection and Ascension into Heaven. By the grace of the Holy Spirit, Cornelius believed in Christ and was baptized with all his family. He was the first pagan to receive Baptism.

He retired from the world and went preaching the Gospel together with the Apostle Peter, who made him a bishop. When the Apostle Peter, together with his helpers Saints Timothy and Cornelius, was in the city of Ephesus, he learned of a particularly vigorous idol-worship in the city of Skepsis. Lots were drawn to see who would go there, and Saint Cornelius was chosen.

In the city lived a prince by the name of Demetrius, learned in the ancient Greek philosophy, hating Christianity and venerating the pagan gods, in particular Apollo and Zeus. Learning about the arrival of Saint Cornelius in the city, he immediately summoned him and asked him the reason for his coming. Saint Cornelius answered that he came to free him from the darkness of ignorance and lead him to knowledge of the True Light.

The prince, not comprehending the meaning of what was said, became angry and demanded that he answer each of his questions. When Saint Cornelius explained that he served the Lord and that the reason for his coming was to announce the Truth, the prince became enraged and demanded that Cornelius offer sacrifice to the idols.

The saint asked to be shown the gods. When he entered the pagan temple, Cornelius turned towards the east and uttered a prayer to the Lord. There was an earthquake, and the temple of Zeus and the idols situated in it were destroyed. All the populace, seeing what had happened, were terrified.

The prince was even more vexed and began to take counsel together with those approaching him, about how to destroy Cornelius. They bound the saint and took him to prison for the night. At this point, one of his servants informed the prince that his wife and child had perished beneath the rubble of the destroyed temple.

After a certain while, one of the pagan priests, by the name of Barbates, reported that he heard the voice of the wife and son somewhere in the ruins and that they were praising the God of the Christians. The pagan priest asked that the imprisoned one be released, in gratitude for the miracle worked by Saint Cornelius, and the wife and son of the prince remained alive.

The joyful prince hastened to the prison in the company of those about him, declaring that he believed in Christ and asking him to bring his wife and son out of the ruins of the temple. Saint Cornelius went to the destroyed temple, and through prayer the suffering were freed.

After this the prince Demetrius, and all his relatives and comrades accepted holy Baptism. Saint Cornelius lived for a long time in this city, converted all the pagan inhabitants to Christ, and made Eunomios a presbyter in service to the Lord. Saint Cornelius died in old age and was buried not far from the pagan temple he destroyed.

Connection for our time: Cornelius reminds us that even those who have not heard the gospel, can be primed for a reception of saving truth. We live in a world that is now saturated with a neo-paganism as we have lost our faith in most of our societies. Let us ask for this great Saint’s intercession as we seek to evangelize the culture anew.