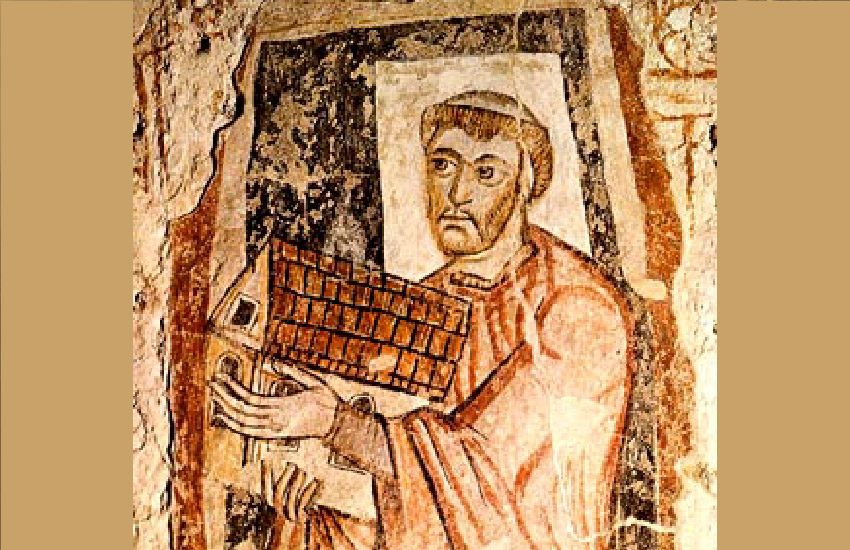 HE was nobly descended, and one of the great officers of the court of Oswi, the religious king of the Northumbers: he was very dear to his prince, and was beholden to his bounty for many fair estates, and great honors; but neither the favors of so good and gracious a king, nor the allurements of power, riches, and pleasures, were of force to captivate his heart, who could see nothing in them but dangers, and snares so much the more to be dreaded, as fraught with the power of charming.

At the age therefore of twenty-five, an age that affords the greatest relish for pleasure, he bid adieu to the world, made a journey of devotion to Rome, and at his return devoted him wholly to the studies of the scriptures and other holy exercises. Some time after his return to England, Alcfrid, son of king Oswi, being desirous to make a pilgrimage to the shrines of the apostles, engaged Biscop to bear him company to Rome. The king prevented his son’s journey; nevertheless our saint travelled thither a second time, burning with an earnest desire of improving himself in the knowledge of divine things, and in the love of God. From Rome he went to the great monastery of Lerins, then renowned for its regular discipline; there he took the monastic habit, and spent two years in the most exact observance of the rule, and penetrated in every exercise with its true spirit: after this he returned to Rome, where he received an order of pope Vitalian to accompany St. Theodorus, archbishop of Canterbury, and St. Adrian, to England. When he arrived at Canterbury, St. Theodorus committed to him the care of the monastery of SS. Peter and Paul, near that city, which abbacy he resigned to St. Adrian upon his arrival in England.

St. Bennet stayed about two years in Kent, giving himself up to religious exercises and sacred studies, under the discipline of those two excellent persons. Then he took a fourth journey to Rome, with a view of perfecting himself in ecclesiastical discipline, and the rules and practice of a monastic life; for which purpose he made a considerable stay at Rome and other places: he brought home with him a choice library, relics and pictures of Christ, the Blessed Virgin, and other saints. When he returned to Northumberland, king Egfrid (in whose father’s court St. Bennet had formerly lived) bestowed on him seventy ploughs or families of land for building a monastery; this the saint founded on the mouth of the river Were, whence it was called Weremouth. When the monastery was built, St. Bennet went over to France, and brought back with him skilful masons, who built the church for this monastery of stone, and after the Roman fashion; for till that time stone buildings were very rare in Britain, even the church of Lindisfarne was of wood, and covered over with a thatch of straw and reeds, till bishop Eadbert procured both the roof and the walls to be covered with sheets of lead, as Bede mentions.

St. Bennet also brought over glaziers from France, for the art of making glass was then unknown in Britain. In a fifth journey to Rome, St. Bennet furnished himself with a larger stock of good books, especially the writings of the fathers, also of relics and holy pictures, with which he enriched his own country. His first monastery of Weremouth was entitled from Saint Peter, prince of the apostles; and such was the edification which it gave, that the same king added to the saint a second donation of lands, consisting of forty ploughs; on which Biscop built another monastery, at a place called Girwy, now Jarrow, on the Tine, six miles distant from the former, and this latter was called St. Paul’s; these two monasteries were almost looked upon as one; and St. Bennet governed them both, though he placed in each a superior or abbot, who continued subject to him, his long journey to Rome and other avocations making this substitution necessary. In the church of St. Peter at Weremouth he placed the pictures of the Blessed Virgin, the twelve apostles, the history of the gospel, and the visions in the revelation of St. John: that of St. Paul’s at Jarrow, he adorned with other pictures, disposed in such manner as to represent the harmony between the Old and New Testament, and the conformity of the figures in one to the reality in the other. Thus Isaac carrying the wood which was to be employed in the sacrifice of himself, was explained by Jesus Christ carrying his cross, on which he was to finish his sacrifice; and the brazen serpent was illustrated by our Saviour’s crucifixion. With these pictures, and many books and relics, St. Bennet brought from Rome in his last voyage, John, abbot of St. Martin’s, precentor in St. Peter’s church, whom he prevailed with pope Agatho to send with him, and whom he placed at Weremouth to instruct perfectly his monks in the Gregorian notes, and Roman ceremonies for singing the divine office. Easterwin, a kinsman of St. Bennet, and formerly an officer in the king’s court, before he became a monk, was chosen abbot before our saint set out for Rome, and in that station behaved always as the meanest person in the house; for though he was eminently adorned with all virtues, humility, mildness, and devotion seemed always the most eminent part of his character.

This holy man died on the 6th of March, when he was but thirty-six years old, and had been four years abbot, while St. Bennet was absent in the last journey to Rome. The monks chose in his place St. Sigfrid, a deacon, a man of equal gravity and meekness, who soon after fell into a lingering decay, under which he suffered violent pains in his lungs and bowels. He died four months before our saint. With his advice, two months before his death, St. Bennet appointed St. Ceolfrid abbot of both his monasteries, being himself struck with a dead palsy, by which all the lower parts of his body were without life; he lay sick of this distemper three years, and for a considerable time was entirely confined to his bed. During this long illness, not being able to raise his voice to the usual course of singing the divine office, at every canonical hour he sent for some of his monks and while they, being divided into two choirs, sung the psalms proper for the hour of the day or night, he endeavored as well as he could to join not only his heart, but also his voice, with theirs. His attention to God he seemed never to relax, and frequently and earnestly exhorted his monks to a constant observance of the rule he had given them. “You must not think,” said he, “that the constitutions which you have received from me were my own invention, for, having in my frequent journeys visited seventeen well-ordered monasteries, I informed myself of all their laws and rules, and picking out the best among them, these I have recommended to you.” The saint expired soon after, having received the viaticum on the 12th of January, in 690.