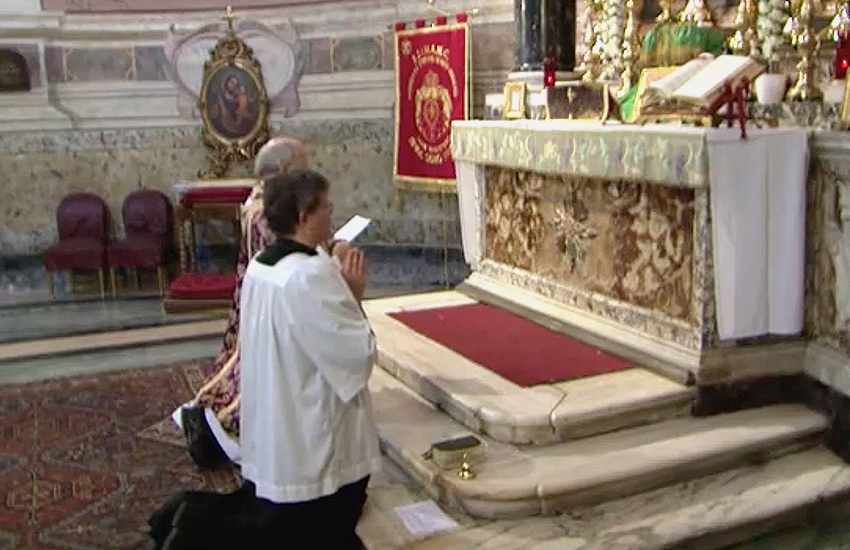 Laetare Sunday, Forth Sunday of Lent

Rejoice, O Jerusalem, and come together all you that love her; rejoice with joy, you that have been in sorrow: that you may exult and be filled from the breast of your consolation. Ps. 121, 1. I rejoiced at the things that were said to me: We shall go into the house of the Lord. Glory be …

Grant, we beseech Thee, O almighty God, that we, who justly suffer for our deeds, may be relieved by the consolation of Thy Grace. Through our Lord.

Lesson from the Epistle of blessed Paul the Apostle to the Galatians.

Brethren: For it is written that Abraham had two sons: the one by a bondwoman, and the other by a free woman. But he who was of the bondwoman, was born according to the flesh: but he of the free woman, was by promise. Which things are said by an allegory. For these are the two testaments. The one from mount Sina, engendering unto bondage; which is Agar: For Sina is a mountain in Arabia, which hath affinity to that Jerusalem which now is, and is in bondage with her children.

But that Jerusalem, which is above, is free: which is our mother. For it is written: Rejoice, thou barren, that bearest not: break forth and cry, thou that travailest not: for many are the children of the desolate, more than of her that hath a husband. Now we, brethren, as Isaac was, are the children of promise. But as then he, that was born according to the flesh, persecuted him that was after the spirit; so also it is now. But what saith the scripture? Cast out the bondwoman and her son; for the son of the bondwoman shall not be heir with the son of the free woman. So then, brethren, we are not the children of the bondwoman, but of the free: by the freedom wherewith Christ has made us free.

I rejoiced at the things that were said to me: We shall go into the house of the Lord. Let peace be in thy strength, and abundance in thy towers.

They that trust in the Lord shall be as Mount Sion: he shall not be moved forever that dwelleth in Jerusalem. Mountains are round about it: so the Lord is round about His people, from henceforth now and for ever.

At that time, Jesus went over the sea of Galilee, which is that of Tiberias. And a great multitude followed him, because they saw the miracles which he did on them that were diseased. Jesus therefore went up into a mountain, and there he sat with his disciples. Now the pasch, the festival day of the Jews, was near at hand. When Jesus therefore had lifted up his eyes, and seen that a very great multitude cometh to him, he said to Philip: Whence shall we buy bread, that these may eat?

And this he said to try him; for he himself knew what he would do. Philip answered him: Two hundred pennyworth of bread is not sufficient for them, that every one may take a little. One of his disciples, Andrew, the brother of Simon Peter, saith to him: There is a boy here that hath five barley loaves, and two fishes; but what are these among so many? Then Jesus said: Make the men sit down. Now there was much grass in the place. The men therefore sat down, in number about five thousand.

And Jesus took the loaves: and when he had given thanks, he distributed to them that were set down. In like manner also of the fishes, as much as they would. And when they were filled, he said to his disciples: Gather up the fragments that remain, lest they be lost. They gathered up therefore, and filled twelve baskets with the fragments of the five barley loaves, which remained over and above to them that had eaten. Now those men, when they had seen what a miracle Jesus had done, said: This is of a truth the prophet, that is to come into the world. Jesus therefore, when he knew that they would come to take him by force, and make him king, fled again into the mountain himself alone.

Praise ye the Lord, for He is good: sing ye to His name, for He is sweet: whatsoever He pleased He hath done in heaven and in earth.

We beseech Thee, O Lord, look favorably upon the sacrifices here before Thee, that thy may profit us both for devotion and for salvation. Through our Lord.

Jerusalem, which is built as a city, which is compact together; for thither did the tribes go up, the tribes of the Lord, to praise Thy name, O Lord.

Grant us, we beseech Thee, O merciful God, that we may treat with unfeigned veneration and ever receive with heartfelt faith Thy holy rites which we constantly celebrate. Through our Lord.