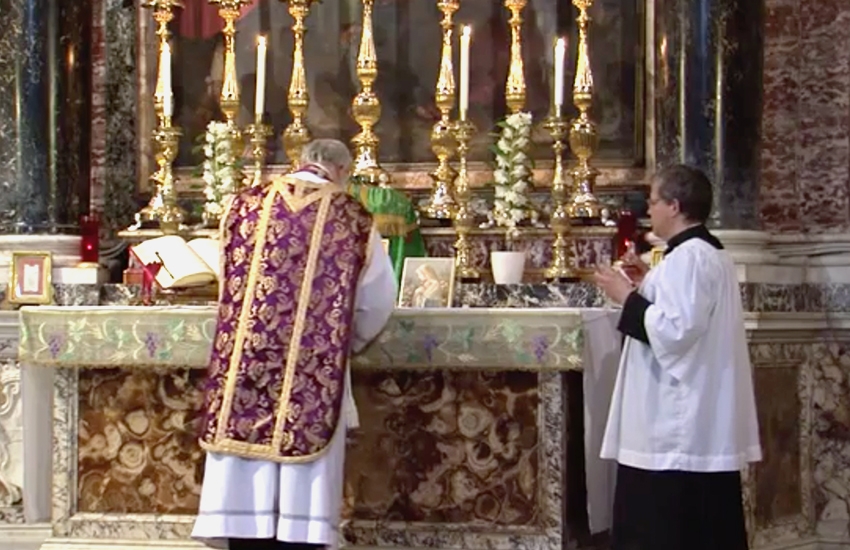 Saturday after the Second Sunday of Lent

The law of the Lord is unspotted, converting souls; the testimony of the Lord is faithful, giving wisdom to little ones. Ps. 82, 2. The heavens show forth the glory of God: and the firmament declareth the work of His hands. Glory be …

Grant salutary effect to our fasts, we beseech Thee, O Lord, that the chastising of our bodies which we have undertaken may be transformed into the growth of our souls. Through our Lord.

Grant us, we beseech Thee, O almighty God, through the intercession of the blessed Bishop Cyril, so to know Thee, the only true God, and Jesus Christ, Whom Thou hast sent, that we may serve to be numbered forever among the sheep that hear His voice. Through the same.

Lesson from the Book of Genesis.

In those days Rebecca said to her son Jacob: I heard thy father talking with Esau thy brother, and saying to him: Bring me of thy hunting, and make me meats that I may eat, and bless thee in the sight of the Lord, before I die. Now, therefore, my son, follow my counsel: And go thy way to the flock, bring me two kids of the best, that I may make of them meat for thy father, such as he gladly eateth: Which when thou hast brought in, and he hath eaten, he may bless thee before he die.

And he answered her: Thou knowest that Esau my brother is a hairy man, and I am smooth. If my father shall feel me, and perceive it, I fear lest he will think I would have mocked him, and I shall bring upon me a curse instead of a blessing. And his mother said to him: Upon me be this curse, my son: only hear thou my voice, and go, fetch me the things which I have said. He went, and brought, and gave them to his mother. She dressed meats, such as she knew his father liked. And she put on him very good garments of Esau, which she had at home with her:

And the little skins of the kids she put about his hands, and covered the bare of his neck. And she gave him the savoury meat, and delivered him bread that she had baked. Which when he had carried in, he said: My father? But he answered: I hear. Who art thou, my son? And Jacob said: I am Esau thy firstborn: I have done as thou didst command me: arise, sit, and eat of my venison, that thy soul may bless me. And Isaac said to his son: How couldst thou find it so quickly, my son? He answered: It was the will of God, that what I sought came quickly in my way.

And Isaac said: Come hither, that I may feel thee, my son, and may prove whether thou be my son Esau, or not. He came near to his father, and when he had felt him, Isaac said: The voice indeed is the voice of Jacob; but the hands are the hands of Esau. And he knew him not, because his hairy hands made him like to the elder. Then blessing him, He said: Art thou my son Esau? He answered: I am. Then he said: Bring me the meats of thy hunting, my son, that my soul may bless thee. And when they were brought, and he had eaten, he offered him wine also, which after he had drunk,

He said to him: Come near me, and give me a kiss, my son. He came near, and kissed him. And immediately as he smelled the fragrant smell of his garments, blessing him, he said: Behold the smell of my son is as the smell of a plentiful field, which the Lord hath blessed. God give thee the dew of heaven, and of the fatness of the earth, abundance of corn and wine. And let peoples serve thee, and tribes worship thee: be thou lord of thy brethren, and let thy mother’ s children bow down before thee. Cursed be he that curseth thee: and let him that blesseth thee be filled with blessings. Isaac had scarce ended his words, when Jacob being now gone out abroad, Esau came,

And brought in to his father meats made of what he had taken in hunting, saying: Arise, my father, and eat of thy son’ s venison; that thy soul may bless me. And Isaac said to him: Why! who art thou? He answered: I am thy firstborn son Esau. Isaac was struck with fear, and astonished exceedingly: and wondering beyond what can be believed, said Who is he then that even now brought me venison that he had taken, and I ate of all before thou camest? and I have blessed him, and he shall be blessed. Esau having heard his father’ s words, roared out with a great cry: and being in a great consternation, said: Bless me also, my father. And he said: Thy brother came deceitfully and got thy blessing.

But he said again: Rightly is his name called Jacob; for he hath supplanted me lo this second time: my first birthright he took away before, and now this second time he hath stolen away my blessing. And again he said to his father: Hast thou not reserved me also a blessing? Isaac answered: I have appointed him thy lord, and have made all his brethren his servants: I have established him with corn and wine, and after this, what shall I do more for thee, my son? And Esau said to him: Hast thou only one blessing, father? I beseech thee bless me also. And when he wept with a loud cry, Isaac being moved, said to him: In the fat of the earth, and in the dew of heaven from above, Shall thy blessing be.

It is good to give praise to the Lord, and to sing to Thy name, O Most Hight. To show forth Thy mercy in the morning, and Thy truth in the night.

At that time, Jesus said to the Pharisees and scribes this parable A certain man had two sons: And the younger of them said to his father: Father, give me the portion of substance that falleth to me. And he divided unto them his substance. And not many days after, the younger son, gathering all together, went abroad into a far country: and there wasted his substance, living riotously. And after he had spent all, there came a mighty famine in that country; and he began to be in want. And he went and cleaved to one of the citizens of that country. And he sent him into his farm to feed swine.

And he would fain have filled his belly with the husks the swine did eat; and no man gave unto him. And returning to himself, he said: How many hired servants in my father’ s house abound with bread, and I here perish with hunger? I will arise, and will go to my father, and say to him: Father, I have sinned against heaven, and before thee: I am not worthy to be called thy son: make me as one of thy hired servants. And rising up he came to his father. And when he was yet a great way off, his father saw him, and was moved with compassion, and running to him fell upon his neck, and kissed him.

And the son said to him: Father, I have sinned against heaven, and before thee, I am not now worthy to be called thy son. And the father said to his servants: Bring forth quickly the first robe, and put it on him, and put a ring on his hand, and shoes on his feet: And bring hither the fatted calf, and kill it, and let us eat and make merry: Because this my son was dead, and is come to life again: was lost, and is found. And they began to be merry. Now his elder son was in the field, and when he came and drew nigh to the house, he heard music and dancing:

And he called one of the servants, and asked what these things meant. And he said to him: Thy brother is come, and thy father hath killed the fatted calf, because he hath received him safe. And he was angry, and would not go in. His father therefore coming out began to entreat him. And he answering, said to his father: Behold, for so many years do I serve thee, and I have never transgressed thy commandment, and yet thou hast never given me a kid to make merry with my friends: But as soon as this thy son is come, who hath devoured his substance with harlots, thou hast killed for him the fatted calf.

But he said to him: Son, thou art always with me, and all I have is thine. But it was fit that we should make merry and be glad, for this thy brother was dead and is come to life again; he was lost, and is found.

Enlighten my eyes, that I never sleep in death: lest at any time my enemy say, I have prevailed against him.

Be appeased, O Lord with this sacrifice and grant that we, who pray to be pardoned our own sins, may not suffer for those of others. Through our Lord.

Look down with favor, O Lord, upon the immaculate victim which we offer to Thee, and grant that, by the merits of the blessed bishop and confessor, Cyril, we may earnestly endeavor to receive it with a pure heart. Through our Lord.

Thou oughtest to rejoice, my son, because thy brother was dead, and is come to life again: he was lost, and is found.

May the divine outpouring of Thy sacrament, O Lord, flow unto the recesses of our hearts and make us sharers thereof in strength.  Through our Lord.

May the sacrament of Thy body and blood, O Lord Jesus Christ, which we have received, by the prayers of the blessed Bishop Cyril, sanctify our minds and hearts, that we may deserve to become partakers of the divine nature. Who livest. Through our Lord.