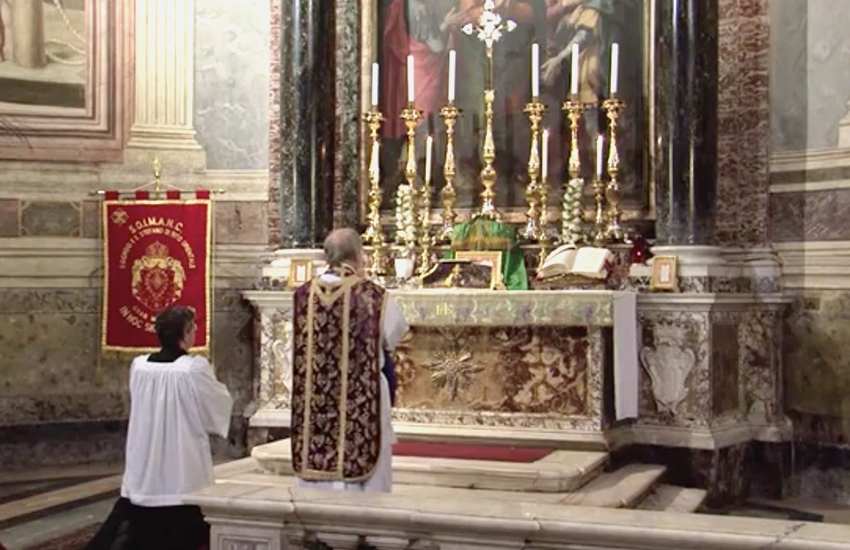 Monday after the Fourth Sunday of Lent

Save me, O God, by Thy name, and in Thy strength deliver me: O God,  hear my payer, give ear to the words of my mouth. Ps. 53, 5. For strangers have risen up against me: and the mighty have sought after my soul. Glory be …

Grant, we beseech Thee, O almighty God, that, keeping the sacred observances with devotion year by year, we may, both in body and soul, be pleasing to Thee. Through our Lord.


In those days, there came two women that were harlots, to the king, and stood before him: And one of them said: I beseech thee, my lord, I and this woman dwelt in one house, and I was delivered of a child with her in the chamber. And the third day, after that I was delivered, she also was delivered, and we were together, and no other person with us in the house, only we two. And this woman’ s child died in the night: for in her sleep she overlaid him. And rising in the dead time of the night, she took my child from my side, while I thy handmaid was asleep, and laid it in her bosom: and laid her dead child in my bosom.
And when I rose in the morning to give my child suck, behold it was dead: but considering him more diligently when it was clear day, I found that it was not mine which I bore. And the other woman answered: It is not so as thou sayest, but thy child is dead, and mine is alive. On the contrary she said: Thou liest: for my child liveth, and thy child is dead. And in this manner they strove before the king. Then said the king: The one saith, My child is alive, and thy child is dead. And the other answereth: Nay, but thy child is dead, and mine liveth. The king therefore said: Bring me a sword. And when they had brought a sword before the king, Divide, said he, the living child in two, and give half to the one, and half to the other.
But the woman whose child was alive, said to the king, (for her bowels were moved upon her child,) I beseech thee, my lord, give her the child alive, and do not kill it. But the other said: Let it be neither mine nor thine, but divide it. The king answered, and said: Give the living child to this woman, and let it not be killed, for she is the mother thereof. And all Israel heard the judgment which the king had judged, and they feared the king, seeing that the wisdom of God was in him to do judgment.


At that time, the pasch of the Jews was at hand, and Jesus went up to Jerusalem. And he found in the temple them that sold oxen and sheep and doves, and the changers of money sitting. And when he had made, as it were, a scourge of little cords, he drove them all out of the temple, the sheep also and the oxen, and the money of the changers he poured out, and the tables he overthrew.
And to them that sold doves he said: Take these things hence, and make not the house of my Father a house of traffic. And his disciples remembered, that it was written: The zeal of thy house hath eaten me up. The Jews, therefore, answered, and said to him: What sign dost thou shew unto us, seeing thou dost these things? Jesus answered, and said to them: Destroy this temple, and in three days I will raise it up. The Jews then said: Six and forty years was this temple in building; and wilt thou raise it up in three days?
But he spoke of the temple of his body. When therefore he was risen again from the dead, his disciples remembered, that he had said this, and they believed the scripture, and the word that Jesus had said. Now when he was at Jerusalem, at the pasch, upon the festival day, many believed in his name, seeing his signs which he did. But Jesus did not trust himself unto them, for that he knew all men, And because he needed not that any should give testimony of man: for he knew what was in man.

Sing joyfully to God, all the earth, serve ye the Lord with gladness: come in before His presence with exceeding great joy: for the Lord He is God.

May the sacrifice offered to Thee, O Lord, ever vivify and fortify us. Through our Lord.

From my secret sins cleanse me, O Lord and from those of others spare Thy servant.

Having received the sacrament of salvation, O Lord, may we be profited unto the increase of our everlasting redemption. Through our Lord.