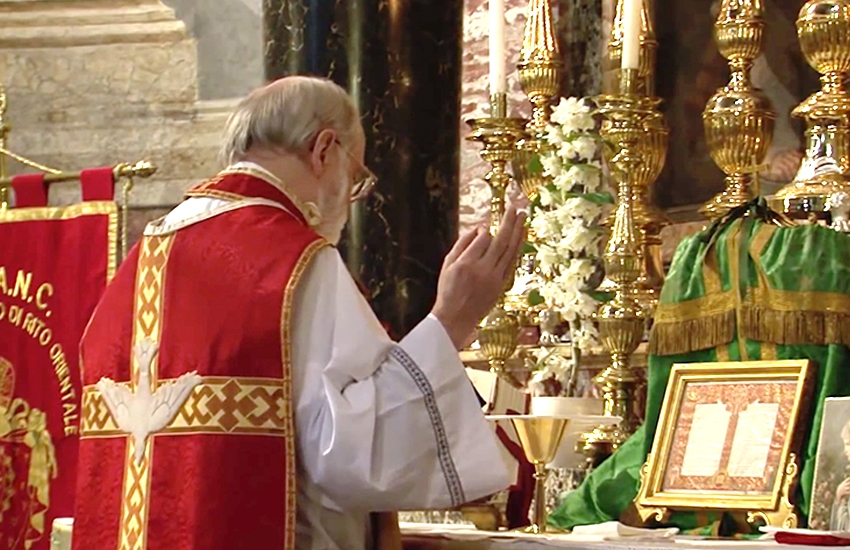 Feast of St. John the Baptist

I spoke of Thy testimonies before kings, and I was not ashamed: I meditated also on Thy commandments, which I love exceedingly. Ps. 91, 2. It is good to give praise to the Lord; and to sing to Thy name, O Most High. Glory be …

May the august festival of St. John the Baptist, Thy precursor and martyr, we beseech Thee, O Lord, effect for us the furtherance of our salvation. Who livest.

O God, Who, among other miracles of Thy power, hast conferred the victory of martyrdom even on the weaker sex, mercifully grant that we, who celebrate the natal feast of blessed Sabina, Thy martyr, may advance toward Thee through her example. Through our Lord.

Lesson from Jeremias the Prophet.
[The time, and the calling, of Jeremias: his prophetical visions. God encourages him.]

In those days: The word of the Lord came to me, saying, Gird up thy loins, and arise, and speak to them all that I command thee. Be not afraid at their presence: for I will make thee not to fear their countenance. For behold I have made thee this day a fortified city, and a pillar of iron, and a wall of brass, over all the land, to the kings of Juda, to the princes thereof, and to the priests, and to the people of the land. And they shall fight against thee, and shall not prevail: for I am with thee, saith the Lord, to deliver thee.

The just shall flourish like the palm-tree; he shall grow up like the cedar of Libanus the house of the Lord. To show forth Thy mercy in the morning and Thy truth in the night.

Alleluia, alleluia. Osee 14, 6. The just shall spring as the lily, and flourish forever before the Lord. Alleluia.

[Christ teaches at Nazareth: he sends forth the twelve apostles: he feeds five thousand with five loaves; and walks upon the sea.]

At that time, Herod sent and apprehended John, and bound him in prison for the sake of Herodias the wife of Philip his brother, because he had married her. For John said to Herod: It is not lawful for thee to have thy brother’s wife. Now Herodias laid snares for him: and was desirous to put him to death, and could not. For Herod feared John, knowing him to be a just and holy man: and kept him, and when he heard him, did many things: and he heard him willingly.
And when a convenient day was come, Herod made a supper for his birthday, for the princes, and tribunes, and chief men of Galilee. And when the daughter of the same Herodias had come in, and had danced, and pleased Herod, and them that were at table with him, the king said to the damsel: Ask of me what thou wilt, and I will give it thee. And he swore to her: Whatsoever thou shalt ask I will give thee, though it be the half of my kingdom. Who when she was gone out, said to her mother, What shall I ask? But she said: The head of John the Baptist. And when she was come in immediately with haste to the king, she asked, saying: I will that forthwith thou give me in a dish, the head of John the Baptist.
And the king was struck sad. Yet because of his oath, and because of them that were with him at table, he would not displease her: But sending an executioner, he commanded that his head should be brought in a dish. And he beheaded him in the prison, and brought his head in a dish: and gave it to the damsel, and the damsel gave it to her mother. Which his disciples hearing came, and took his body, and laid it in a tomb.

In thy strength, O Lord the just man shall exult, and in Thy salvation he shall rejoice exceedingly: Thou hast given him his heart’s desire.

The offerings which we bring, O Lord, in memory of the passion of Thy holy martyr, John the Baptist, we pray that, by his favor, they may profit us unto salvation. Through our Lord.

Graciously receive, O Lord, the gifts which we offer on the solemnity of Thy martyr, Sabina, by whose patronage we trust to be delivered from all evil. Through our Lord.

O Lord, Thou hast set on his head a crown of precious stones.

May the solemn festival of St. John the Baptist bring us the grace, O Lord, both to venerate that which is signified in the great sacrament we have received, and to be joyful because this thing hath been more abundantly manifested us. Through our Lord.

May the mysteries we have received, help us, O Lord, and, by the intercession of blessed Sabina, Thy martyr, may they cause us to rejoice in everlasting protection. Through our Lord.