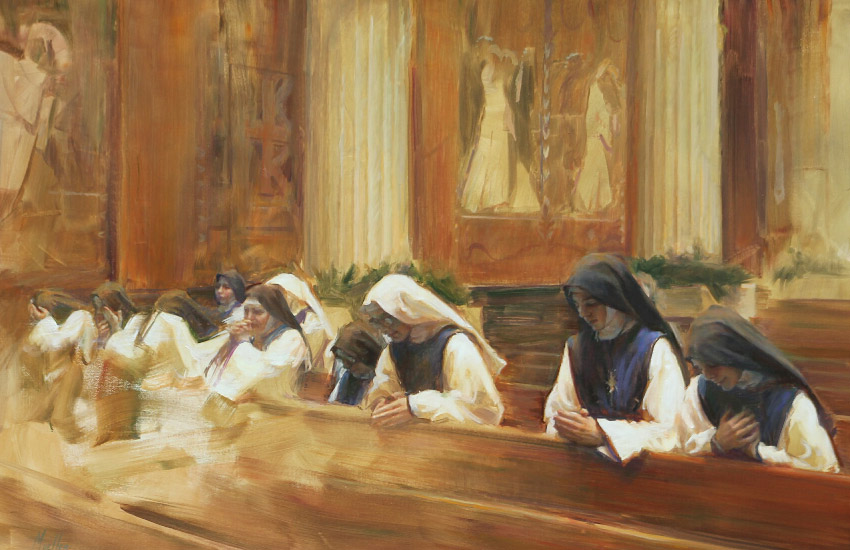 We may hold it for certain that they who persevere in the exercise of prayer will not be lost, no matter how great or how multiplied their sins may be, or how frequent the temptations with which the demon assails them. Sooner or later the Lord will deliver them from peril, and conduct them to the port of salvation. — St. Teresa.

St. Mary of Egypt after her conversion was continually tormented during the space of seventeen years by horrible temptations. She was always victorious over these assaults of the spirit of impurity, because she never ceased to pray. It was through this means that St. Margaret of Cartona was preserved from falling, notwithstanding the vivacity of her passions and the continual temptations that the remembrance of her many disorders occasioned her.

When one who is in a holy state allows himself to fall into sin, how frightful the depth to which he sinks. How difficult it is to rise again! Nevertheless it can be accomplished through meditation and constant prayer. A priest in Italy who had become a monster of iniquities, and who deserved the most rigorous punishment of the law, was imprisoned in a frightful dungeon. He suffered a kind of hell — as he could not entirely smother the voice of conscience — from remorse and the despair into which the sight of his sins had thrown him, as well as from fear of the punishment that awaited him. A zealous missionary asked and obtained permission to visit him. The priest was furious upon seeing the missionary. But charity is not easily vanquished. The missionary, taking his crucifix, placed it where the rays of light fell on it, and said: “I ask you, sir, to look often upon this image of Our Saviour, Who has died for sinners and Who calls them to repentance.” He left him a book for spiritual retreats, exhorting him to make use of the condition in which he found himself, and make salutary reflections for his soul’s advantage. The unfortunate man, who seemed to be hastening towards final impenitence, found salvation in these means offered him. Upon reading the pious meditations, and studying the crucifix, he found how guilty he had been. He wept bitterly, never ceasing to beg for mercy through Jesus Christ. His prayers were heard. He begged to see the one who had been instrumental in his conversion. He made a confession with deepest contrition. In the depth of his contrition he acknowledged many crimes for which he was not convicted, even some of which he was not suspected. “Happy,” he said, “if I escape eternal torments by enduring here those which I have deserved.” He was granted the liberty to go among the prisoners, where he labored so efficaciously for their sanctification, by the good example he gave, by touching exhortations, and by different exercises of piety which he introduced, that this place of horror and sin became a place of benediction, and might be called a monastery of true penitence. Although perfectly converted, he was still a criminal, and waited with submission, almost with impatience, the word which was to condemn him to the most rigorous punishment. But before the time arrived which was fixed for his execution, he fell dangerously ill, and died in sentiments of deepest contrition and love. “I have great confidence that Our Saviour will be merciful,” he said, when dying. “I think I have wept sincerely for all the sins by which I have offended a God so infinitely perfect. So long, alas! I had not loved a father so tender. But I feel that I love Him now.” How salutary are the fruits of meditation and prayer!

O my God, happy he who meditates in recollection, before the image of Jesus crucified, upon the mercies of the Lord. I will abase myself in Thy presence, and say: My Father, I have sinned; have mercy on me.